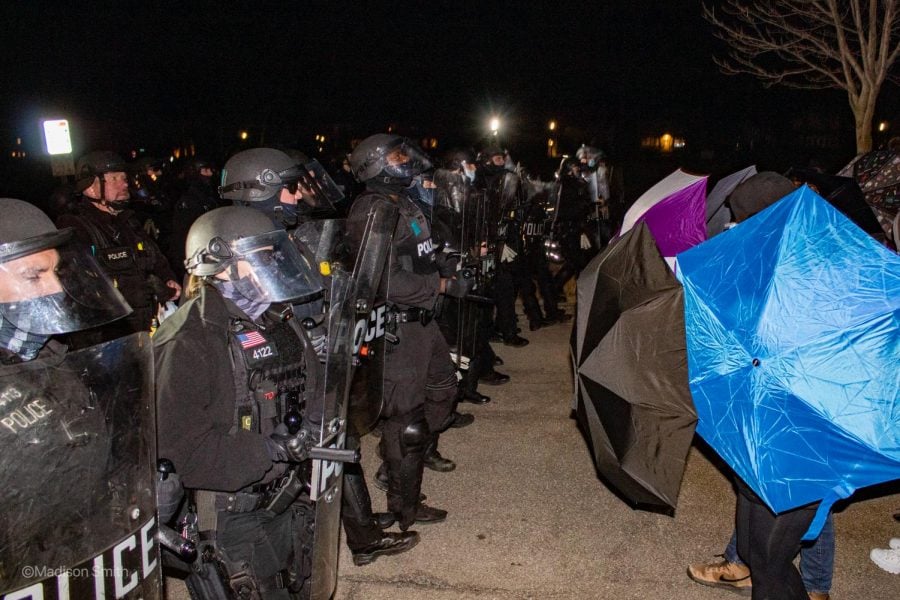 In its first in-person action since last November, NU Community Not Cops assembled Saturday to push for the abolition of University Police and to criticize University leadership. The group of about 150 students was met with over 70 fully armed riot police from the Northern Illinois Police Alarm System’s Mobile Field Force.

In addition to demands for abolition of UP, NUCNC has been calling for University President Morton Schapiro to resign. Schapiro announced last week he would conclude his tenure in August 2022, when his contract was scheduled to end. He has told the Daily recent events did not contribute to his decision to step down.

Saturday’s protest — advertised on social media as “NUCNC says ‘Bye Bye Morty!’” — served as a reminder that, despite Schapiro’s impending departure, the group will continue to fight until its demands are met, organizers said.

“Morty might be on his way out but the fight for abolition is not over!” the advertising flyer read.

“We know that no matter what identities our next president holds that by virtue of their position, their priorities align with maintaining White supremacy,” a speaker read. “Our real target is the Board of Trustees, which consists of CEOs, war profiteers and generally folks who are invested in maintaining the life-threatening system of capitalism.”

NUCNC has steered its actions toward Schapiro’s residence before — most notably during the group’s first major action on Oct. 17, which prompted outrage from the president and later led to the trending hashtag #ResignMorty on Twitter.

The demand for Schapiro’s resignation came alongside what NUCNC said was months of inaction from the president since the group’s initial petition of demands on June 3, 2020 which preceded over 30 consecutive days of actions, in addition to meetings, phone zaps and political education events demanding the abolition of UP.

Police cars surrounded the student protesters on all sides. Some students expressed concern that police were about to “kettle” protesters — or encircle the group and close it in to perform a mass arrest.

About 10 minutes after the protesters arrived at Schapiro’s house, one NIPAS officer among the small group of EPD officers standing on scene projected an announcement.

“Attention: the Evanston Police Department has determined this to be an unlawful assembly,” the officer said. “Continuing to participate in this assembly will result in your arrest and prosecution for violation of the Illinois Criminal Code. You are ordered to immediately disperse. Failure to comply could result in chemical and/or less lethal munitions being deployed.”

Roughly 10 minutes later, over 70 officers from NIPAS’ Mobile Field Force — including SWAT-level officers, bicycle officers and K-9’s — were on the scene. The outside crowd control force has been deployed at previous protests, including on Halloween when they deployed chemical munitions and made an arrest. Some officers were holding zipties, and at least one EPD arrest vehicle was present.

Many Evanston residents and aldermen have expressed displeasure at the volume and intensity of the NIPAS presence at student protests. One resident stood in front of his house Saturday and filmed the NIPAS officers as they marched toward student protesters.

NIPAS did not use force on Saturday, but they did advance on protesters, hitting their riot shields with batons and chanting “move back” in unison as they pressed students’ barriers of bikes and umbrellas. The group moved south on Orrington Avenue, east on Lincoln Street and south on Sheridan Road for over half an hour. Around 11:40 p.m., students safely dispersed in front of the Technological Institute at 2145 Sheridan Road.

Saturday marked 238 days since NUCNC and affiliated organizations sent a petition to NU’s administration demanding divestment from policing and investment in Black lives. Since the petition, the group has continued to put pressure on the University to act on their demands — pressure they urged fellow students Saturday to continue.

“Meet with your deans, meet with Morty, talk about it in your classes, and motivate student groups to get involved,” a speaker said. “If you want to support and help the movement, we need every single person to put pressure and continue to show up. As (abolitionist) Mariame Kaba said, ‘we do this,’ together, ‘til we free us.’”

— Students pepper-sprayed, one arrested during Halloween action to abolish NUPD