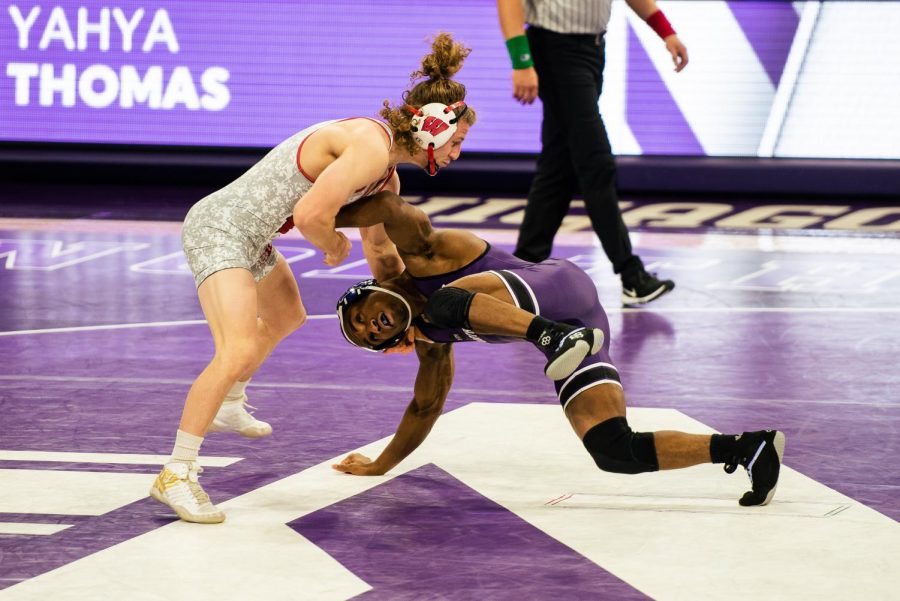 Yahya Thomas wrestles against Wisconsin’s Drew Scharenbrock. The junior will represent Northwestern at the NCAA Tournament in St. Louis next week, one of seven Wildcats set to appear at the tournament.

If you’re a Midwestern kid who loves wrestling, you’ve been to the Midlands Championships in Hoffman Estates, Illinois. For 58 years now, college teams have squared off in the early season mega meet against the Big Ten’s best.

That’s where junior Yahya Thomas confirmed his love for wrestling. Since he started in the sport at seven years old, Yahya, his dad and brothers would make the journey from their home in the city to watch the final rounds, as warriors in colorful singlets competed for the podium places.

Now he’s the one families drive up to see. At the Midlands, Big Ten Championships and National Championships, Thomas has turned himself into one of the conference’s top wrestlers at the 149-pound weight class.

In the stands always are his father Israil, mother Bilquis and grandmother Renee. Wrestling, for him, is a family affair.

“He just liked to roughhouse”

Israil Thomas laughs when he talks about his son’s natural proclivity to wrestling. As a boy, without ever having watched wrestling before, Yahya would take down and pin his brothers, even the oldest, Suleiman.

“Yahya was the biggest sweetheart in the house, the sweetest little boy,” Israil said. “But he just had a lot of energy, he was really really competitive. He just liked to roughhouse.”

They put him in soccer, the sport where Yahya’s older brother excelled. But Yahya was always supposed to be a wrestler. One day when the boys were young, Israil heard a scream from the other room and ran over to find Yahya innocently grinning in his direction, legs planted on both of his two younger brothers, Rahman and Mahmuud.

“He was like, ‘Look dad, I did it,’” Israil said. “From then I was like, ‘OK, we’ve gotta find someplace for this kid to go.’ Once he got old enough to wrestle, we took him out.”

“Someplace” would be Harvey Twisters, the closest wrestling gym by the Thomas home that happened to be a nationally recognized training center in the Harvey Park District of Chicago. Yahya remembers being angry when they didn’t let him actually wrestle at first. He had to spend his first few weeks at the gym learning the fundamentals, building the foundations.

And then, the beatdown. The first day Yahya was allowed to wrestle, he didn’t win a single match. The drive back home was filled with silence. Israil remembers questioning whether his son would stick it out.

“I thought he would never want to go back,” Israil said. “The next day, he asked me when we were going back to practice. That was it, that was the beginning.”

“You have to adapt”

Pretty soon, Yahya was wrestling the best youth players in and around Illinois. By the time Thomas was 11, he’d been named the top ranked youth wrestler in the nation.

“Over time, I grew into really liking the sport,” Yahya said. “The perseverance aspect and the battle aspect, the competition aspect, getting to be able to go into the arena and never know what’s going to happen. You’re just in there with your weapons. You have to adapt.”

Yahya set a goal for himself upon his matriculation to Mount Carmel High School: he wanted to become a state champion. But injuries quickly complicated that goal. He broke his arm two separate times in the leadup to his freshman year. It didn’t heal all the way until Yahya was almost a sophomore.

So he wrestled an entire year with effectively one arm. The other literally atrophied from lack of use.

That lack of healthy game time stunted Yahya’s development. He missed out on qualifying for the Illinois state championships as a freshman and sophomore. The Big Ten college programs that made contact when Yahya was a junior stopped poking around when he moved up to the 145-pound weight class. Except Northwestern.

“They became the frontrunner because they believed in him all the way through,” Israel said.

Growing up at Northwestern

Thomas arrived at Northwestern in 2017, when the team was dominated by veterans like Johnny Sebastian, Zack Chakonis and fiery Big Ten champion Sebastian Rivera. They set the tone for what it was like to wrestle at NU.

For a while, he sat under them and absorbed all their lessons, learning how to thrive as both a student and collegiate wrestler. Now, Thomas is the teacher.

“When I first got here, one of my big questions was whether or not I’d stay an economics major,” Thomas said. “Getting through that, persevering through the challenges instead of switching majors put me in a unique position to mentor people through academics.”

Thomas remembers scrambling to take a final while at the Big Ten Championships his sophomore year. Coach Matt Storniolo had to proctor the exam as Thomas worked through his problem sets in a hotel room.

“There are times you’ve just got to roll up and make sure you get the work done,” Thomas said. “There’s not really anything else to say other than that.”

He’s a darn good wrestler too. Thomas recorded a 16-8 record as a sophomore last year, winning three matches at the 2020 Big Ten Championships. This year, he’ll be one of seven representing Northwestern at the NCAA Championships in St. Louis.

That’s after the disappointing Big Ten Championships where Thomas won twice and lost three times, each loss coming by a single point.

“He’s got to be more offensive,” Storniolo said in the aftermath. “He’s got to put points on the board. When you let matches go into overtime, anyone can win those matches. Yahya’s got to open up a little, he’s got to finish his attacks better.”

With the NCAA Championships set to begin in one week, Thomas has had time to dig deep into the mistakes he made at the Big Ten Championships and change his strategy in accordance with his coach’s words.

Opponents tend to wrestle Thomas conservatively, making it tough for anyone to put points on the board, looking to win a battle of attrition. It completely changes the match when he scores first, forcing the opponent to go on the offensive. That’s when he says “the real wrestling happens.”

“I can score whenever I decide to score,” Thomas said. “I just need to have that kind of mindset going into NCAA’s and not let what happened at Big Tens deter my focus…I’m really excited to see where that mentality can take me in the tournament.”

— Wrestling: Coming off a loss against Minnesota, Northwestern gets set for Big Ten Tournament