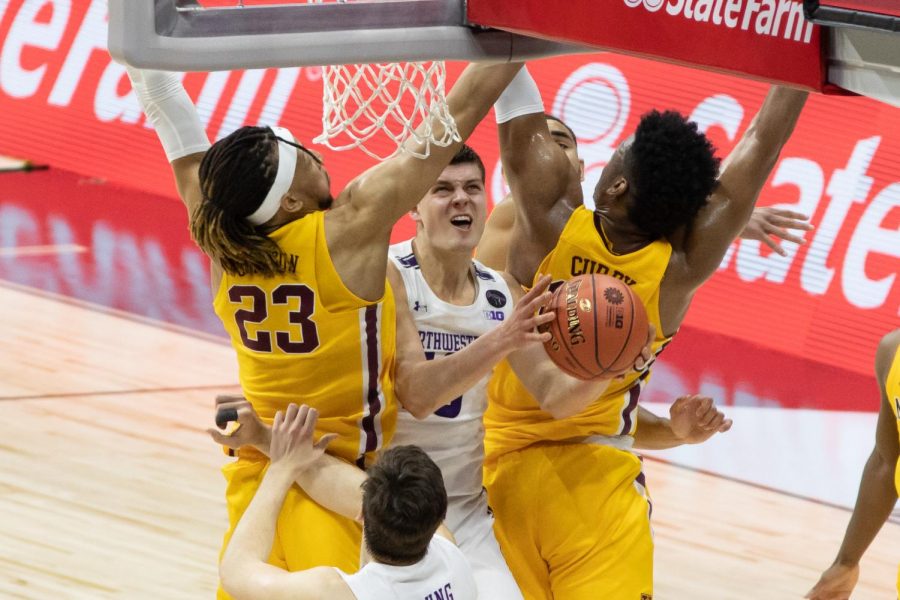 Junior forward Miller Kopp splits two Minnesota defenders in a layup attempt in the first round of the Big Ten Championship. Kopp endured a rough junior season, including making just 21.4% of his field goal attempts in March.

Northwestern’s 2020-21 men’s basketball had it all: a 13-game losing streak, a spot in the AP Top 25, stunning collapses, upset victories. A day after the Wildcats’ season-ending loss in the first round of the Big Ten Tournament to Minnesota, the Daily Northwestern’s beat reporters look back on a wildly unpredictable season with an all-too-familiar end result.

1. NU finished 6-13 in Big Ten play and 12th out of 14 teams before bowing out in the first round of the Big Ten Tournament. Should the Cats’ 2020-21 season be considered a disappointment?

Patrick Andres: Yes, with the caveat that NU appeared at times to have taken real strides from its 8-23 ledger in the 2019-20 season. The Cats beat Michigan State, Ohio State and Maryland, all likely NCAA Tournament teams. They jumped from 290th to 208th in the country in offensive rating, and 298th to 178th in defensive rating. But despite everything, NU still accrued a losing streak of double-digit games for the third consecutive season. There’s a lot the Cats can build on, but between the missed opportunities and self-inflicted wounds in their long losing streak, a sense remains that they could have accomplished more.

Gabriela Carroll: Had NU not opened with an AP-top 5 win (even though Michigan State ended up being way worse than anticipated) and their first 3-0 start in Big Ten play in over 50 years, I’d say no. For that one week, I genuinely thought the Cats might be a tournament team, making the 13 straight losses even more disappointing. Perhaps the most disappointing thing about the season is that this roster of players genuinely seems to have the talent to compete in the conference, but they just…can’t. When they put it together in those early games, NU looked great. They never got any of that magic back.

John Riker: Yes, it should be considered a letdown, although it’s in large part due to the Cats’ hot start. NU’s 3-0 opening to Big Ten play set them up well to take a huge leap forward and that just didn’t happen. The absurd strength of schedule and the rigor of a COVID-affected season should be taken into account, but it’s impossible to have a 13-game losing streak and not call the season a disappointment. A couple Big Ten tournament wins might have lessened the stench around the midseason slump. Instead, the Cats matched up against a Minnesota team that NU had beat weeks earlier, was without two key players due to injury, had lost seven straight games and turned the ball over 17 times. The Cats lost, and finished the 2020-21 season short of their goals.

Andres: Boo Buie really embodied the Cats’ roller coaster of a season, from start to finish. On Dec. 20 against then-No. 4 Michigan State, he looked, for all intents and purposes, like the best player on the floor, scoring 30 points and knocking down five three-pointers. It was his late three that buried No. 23 Ohio State six days later. In the four losses that followed that win over the Buckeyes, however, he made just two of 29 field goal attempts. At the season’s end, he seemed to find his footing again, averaging 17 points in the last three regular season wins. More than anyone else, Buie was the swing state on NU’s electoral map.

Carroll: Surprised I’m the only one saying Chase Audige! Audige was new to the team this season, and immediately became one of NU’s most electric players. He exploded onto the scene in the Cats’ first game against Arkansas-Pine Bluff, scoring 16 points, but it wasn’t until Dec. 23 against Indiana that Audige’s full potential started to show. He almost single-handedly brought the Cats back to win with his 17 second half points. Even during the long losing streak, Audige brought energy and excitement to the court. He wasn’t always great, but his performances against Ohio State on Jan. 13 and Illinois on Feb. 16 were electric. Audige forced turnovers, committed some of his own, made big shots and big plays and played stifling defense. Whether he was a high scorer or not, he was always so fun to watch.

Riker: Ryan Young. One of Collins’ major changes to start the 2020-21 season was dropping Young from the starting lineup to up the pace and challenge opposing defenses with three-point shooters. Even though Young’s start total dropped from 31 starts in 31 games as a first year to just five as a sophomore, he was one of the team’s most valuable players and especially picked it up down the stretch. Young ranked seventh on the team in minutes but finished second in a couple statistics, including Sports Reference’s win shares metric, rebounds and blocks. He ranked fifth in the Big Ten in field goal percentage. Though he finished with modest season-highs of 14 points and nine rebounds and has never been a high-volume player, Young filled the Cats’ need for a viable post threat and came up clutch in wins against Maryland and Nebraska. Pete Nance enjoyed a breakout season and was NU’s best player, but Collins’ utilization of Young made the sophomore center the guy to watch.

Andres: Playing games — plural — past the first round of the Big Ten Tournament, whether that’s in the conference tournament itself, in the NIT, or any postseason destination. The young team Collins trumpeted throughout 2020-21, assuming everyone is back, won’t be so young next year — Kopp and Nance will be seniors, Audige will be a redshirt junior, and Buie will be a junior. If the Big Ten softens somewhat from its historically arduous 2020-21, and the core continues to improve, this team has the pieces to go places in the conference and outside of it. These would be welcome developments as the 2017 Tournament run turns five, because the trophy case since that magical year has been pretty bare.

Carroll: Collins has been touting the youth of this roster for multiple seasons. Next year is year three or four for almost all of these guys. True progress would mean ending with a winning record, even if it’s barely over .500. If they can’t get there, with these players being mostly juniors and seniors, then this entire rebuilding process has been a failure.

Riker: Reaching .500 in Big Ten play, which would put NU in March Madness contention. This is a reasonable goal, given the Cats’ six conference wins this year and the possibility that all of the major contributors return next year while their rivals graduate some of their stars. Collins chose to rebuild his team after the graduation of the March Madness core, giving young guys like Nance, Kopp and Buie plenty of playing time instead of chasing transfers. Year 4 is positioned to be the ultimate prove-it season for this current core — it’s next year or never.

4. You’re sitting at coach Chris Collins’ desk. What are the offseason priorities?

Andres: Resist the urge to immediately reinvent the wheel with the new guys. NU is poised to welcome three recruits next year — Casey Simmons (of Milton, Massachusetts), Brooks Barnhizer (Lafayette, Indiana) and Julian Roper (West Bloomfield, Michigan). Ty Berry, the Cats’ lone freshman regular this year, thrived when Collins deployed him in situations that played to his sharpshooting strengths. Depending on how next year’s rotation shakes out, Collins would be similarly wise not to ask Simmons, Barnhizer and Roper to do too much too soon, but rather to incorporate them, at least at the beginning, on a situational basis.

Carroll: Go find a grad transfer point guard. When Boo Buie’s great, he’s great. But in his two seasons at NU, he’s been streaky and inconsistent, and Ryan Greer isn’t much of a scorer. Chris Collins should take a hard look at the grad transfer options, because having a strong second point guard would be huge for a Cats team in need of a more consistent offense. As an example, Michigan was projected to be a middling team in the Big Ten. Coach Juwan Howard brought in a grad transfer point guard, and they won the conference. Collins should strongly consider it.

Riker: Keep everybody around. January and February were brutal for the Cats and it would have been understandable for NU to tune out during its 13-game losing streak. The Cats have to hope their major contributors will continue to buy into Collins’ message and stick around for another go-around, because without a Kopp or a Nance, NU will take a sizable step back with no strong avenue to replace them. Internal improvement may not be enough to win the Big Ten Tournament, but there’s enough on this roster to eke out 10 conference wins.

Andres: Refreshing the AP Top 25 website ad nauseam the afternoon of Dec. 28, and eventually seeing the No. 19 next to the Cats’ name. NU, fresh off its upset of No. 23 Ohio State, seemed poised for a wholesale turnaround. With the football team days away from playing in the Citrus Bowl, and the women’s basketball team off to a hot start, the Cats’ sports media alumni-industrial complex looked ready to go into insufferability overdrive. After that, mistakes were made, and it would be 59 days before NU won another men’s basketball game. But it is decidedly better to have been ranked and lost than to never have been ranked at all.

Carroll: Boo Buie’s game winner against Ohio State. That moment in time felt like the peak of what NU could be — winning close games, knocking down big shots and taking down ranked opponents. Despite the 13 straight losses and the disappointing end, in that one week, the Cats were playing outstanding basketball. If this season was a roller coaster ride, that moment was the huge, exciting drop you’ve been waiting for all day. After the first game, I felt like the team’s success was likely a fluke, and that NU would come down to earth. But after three games, there was a feeling in the Cats fanbase that this team might actually be a contender. Obviously, they crashed and burned after that win. But that moment of fun and optimism, both on and off the court, stayed with me.

Riker: Indiana’s Jerome Hunter hitting the game-sealing three with no one in attendance. The Cats were up seven points on the Hoosiers with two minutes to go in regulation and led by six points with a minute to go in the first overtime and surrendered both leads. But the Cats’ confidence was, somehow, still intact going into that second overtime period and another overtime period felt inevitable in the final minute. Instead, Hunter hit a three-pointer with 15 seconds left to put Indiana up four. Welsh-Ryan Arena was already dead silent from the absence of fans, but NU’s deflation in that moment was palpable. Look beyond the 13-game losing streak  — the Cats contested most of their games in 2020-21. But it rarely resulted in wins, and all too often ended in heartbreak.