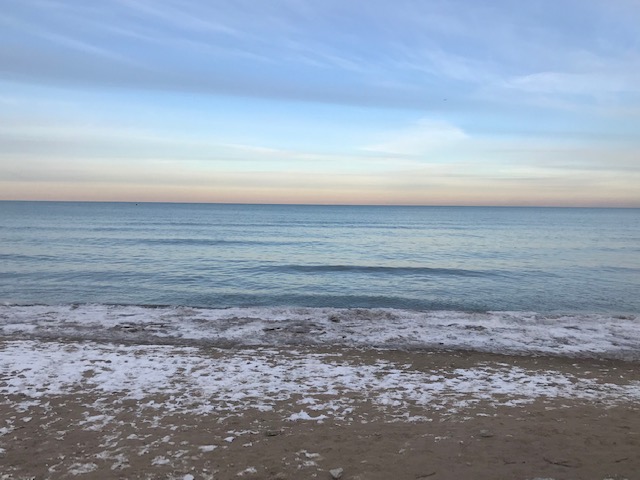 The lakefront at sunset. Evanston designed beach tokens as a temporary way to generate revenue, but 90 years later, admission fees are still around.

Residents say the six beaches that span Evanston’s Lake Michigan shoreline are an integral part of the city’s identity. However, historians and advocates say beach admissions fees are a city effort to block marginalized residents from the shores.

Evanston Township High School teacher Abdel Shakur said he is in favor of abolishing the beach token system. The elimination of tokens, Shakur said, is dependent on how seriously Evanston is committed to ending systemic racism.

“I make a strong connection between this limiting access with a beach token and setting up an environment and ecology for White supremacy,” said Shakur. “Where people know that no one’s gonna say anything because we’ve all paid to have this kind of access.”

Citizens’ Greener Evanston environmental justice advocate Clare Ruen, who studies the relationship between Evanston residents and Lake Michigan, said most residents remember learning that the tokens were designed as a temporary solution to raise money for ecological remediation.

“But then they stuck around,” said Ruen. “It was understood that (beach tokens) were intended to segregate and to make it harder for Black families to get to the beach. I think the fact that they never went away has felt disingenuous to some.”

All six of Evanston’s beaches require a season token or a daily pass for all persons 1 year of age or older to gain admission. For adult residents, daily tokens cost $8, a season pass costs $28 until July 31, then decreasing to $18 for the remainder of the summer. Non-residents pay even higher fees.

Visiting all of the city’s beaches was free until 1931, according to an Evanston History Center report. Although beaches were free, they were segregated. According to a Shorefront Legacy Center report, Black people could only visit a small portion of the beach off of Lake Street at the time.

When Evanston began selling tokens in 1931, the system was posed as a way to temporarily generate revenue to fund a “beachfront beautification program.” However, Black residents couldn’t purchase the tokens. It is unclear exactly when Black residents were permitted to purchase tokens. According to historian Dino Robinson, founder of the Shorefront Legacy Center, documentation of these older city ordinances is either difficult to find or nonexistent. Robinson works to preserve the North Shore’s Black history and has provided documentation of the city’s discriminatory policies and practices.

The city introduced the beautification program near the height of the Jim Crow era in 1931, the same year Edwin B. Jourdain Jr. was elected as Evanston’s first Black alderman. During his time on City Council, Jourdain challenged Evanston’s segregationist practices, advocating for all residents to have access to public spaces.

“I ask longtime residents, when did you first recognize the segregated practices in Evanston?” Robinson said. “Everyone has their unique stories, but they tend to circle around public access.”

Even once Black residents could purchase tokens, the ability to do so didn’t guarantee beach access. In 1936, a lifeguard denied William Bell, a Black student at Northwestern, the right to use the University’s beach even after he had purchased a token. When Bell refused to leave, lifeguards closed the beach, ordering everyone to leave. Lifeguards then readmitted all the White visitors one-by-one while barring Bell from entering.

According to an article published by the Indianapolis Recorder, University officials threatened Bell with violence if he continued to visit the beach.

The lifeguard who initially forced Bell to leave was another student at Northwestern. Shakur said the beach token policy inadvertently turns the young people employed at the city’s beaches into a police force.

“The policy that’s been in place since the 1930s has reinforced the system of White supremacy in Evanston,” Shakur said. “They’re lifeguards, but part of their job is to make sure that the people on the beach are people who paid to be there.”

Evanston’s current use of beach tokens

Today, the city justifies the use of admission fees to city beaches as a means to finance maintenance, equipment costs and a seasonal staff of lifeguards and attendants.

Unlike nearby municipalities whose park districts are an independent unit of local government, and thus can fund themselves independently by levying taxes, Evanston’s Parks/Recreation and Community Services Department relies on the city’s general fund. Because the department is financed by the general fund, Parks and Recreation director Lawrence Hemingway said the department competes with all other city departments, including the public works, police and fire departments for funding.

The Evanston Parks/Recreation and Community Services Department expenditures are higher than the funding it receives from the city’s general fund. The gap is tightened by the revenue its programs generate, including beach token sales. In the 2020 fiscal year budget, the city made $247,744 through the beach access fees.

“Until we have a way to balance our budget, I understand why we have tokens,” Hemingway said. “It’s really difficult for us at this time to eliminate the tokens, so that’s why we work hard to create access for those who can’t afford it.”

Hemingway said all ETHS students between 14 and 18 years old can pick up a free 10-punch beach pass, and families that qualify for free-and-reduced lunch can obtain free beach tokens at any community center throughout the city. There is also a fee assistance program that cuts the cost of admission in half, but it requires verification of both residency and income.

Still, Evanston Mayor-elect Daniel Biss said the lakefront should be a universally accessible public community asset, and that he would prefer to do away with beach tokens altogether.

Biss said tackling environmental injustice requires an approach from all angles. In addition to ensuring equitable lake access, he said the city should work toward creating more open green spaces in historically Black and brown neighborhoods that are located further away from the lake.

While Evanston and many other suburbs around the country engage in dialogues about racism and equity, the question of whether these statements will result in tangible, sustainable action remains.