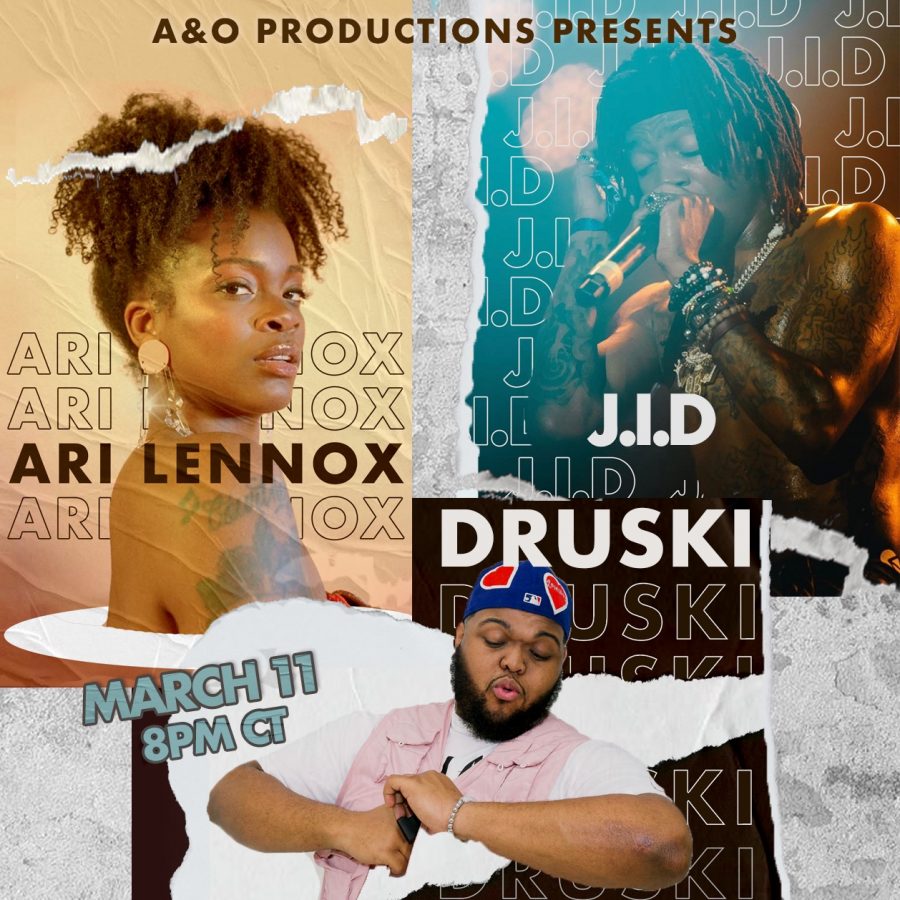 Pictured: Lennox, J.I.D and Druski. A&O Announced Thursday the three will be attending their Speakers and Concerts collaboration event as invited guests.

The event began with a performance by J.I.D and a DJ. Among the setlist were his new tracks, “Ballads,” “Skegee” and two of his more popular songs “151 Rum” and “Down Bad.” Ari Lennox then sang a number of songs backed by a band, including the notable song “Whipped Cream” and, perhaps most germane to Northwestern’s locale, “Chicago Boy.”

After both artists performed, Druski was invited into the Zoom room and joined the artists for a Q&A session, with live questions from attendees in the chat.

Some questions played into light banter like their celebrity crushes and their favorite restaurants in Atlanta, where all three performers spent a significant amount of time. Other questions tackled the artists’ relationships with their music. When asked her favorite songs from her debut album “Shea Butter Baby,” Lennox replied “Whipped Cream” and “Up Late.”

Through the chat, one attendee asked the panel “What do y’all love the most about Black people?”

“We hold the culture, man,” Druski replied. “Once we realize we do, we hold the power.”

Following the Q&A, A&O co-chair Zach Smith bid Lennox and J.I.D. farewell, and commenced a session of “Coulda Been Records” with Druski, where a number of students joined the call and rapped for the comedian.

Weinberg sophomore Rome McGee opened the session and set the bar high for the following acts. After rapping over a beat for nearly two minutes, he was met with overwhelming support from both Druski and viewers in the chat. The comedian hinted toward signing McGee to a record label. Druski is also known for not letting his guests finish performing as part of his comedy sketch, but did not interrupt McGee once.

McGee said he has been following Druski for two years, making tonight’s performance all the more meaningful to him. He said his goal tonight was to make an impression on the comedian to further his dreams of being an artist.

“For him to be real with me and tell me I had talent and to keep going, especially knowing I have more levels to tap into, was surreal,” McGee said. “This will help me put pressure on myself to believe in myself and know that I have something of quality that I can be proud of.”

McGee said on Thursday he will continue working on his music, with the hopes to release music soon.

The remaining guests were met with mixed reviews, with some receiving constructive criticism, life advice and words of encouragement from Druski. At a few performances, Druski got up and left the call, seemingly disappointed in the talent. The performances varied from freestyle rap to a cappella.

After cycling through what Smith said were all “vetted” guest artists, Druski concluded the webinar and encouraged the approximately 200 attendees to migrate to his Instagram Live, which he started shortly after.

“We know that it takes a lot to get someone on week ten to get onto their laptop at 8 p.m. on a Thursday when they don’t have to be,” Smith said. “So we wanted to go all out.”

Laya Neelakandan and Rebecca Aizin contributed to the reporting in this article.