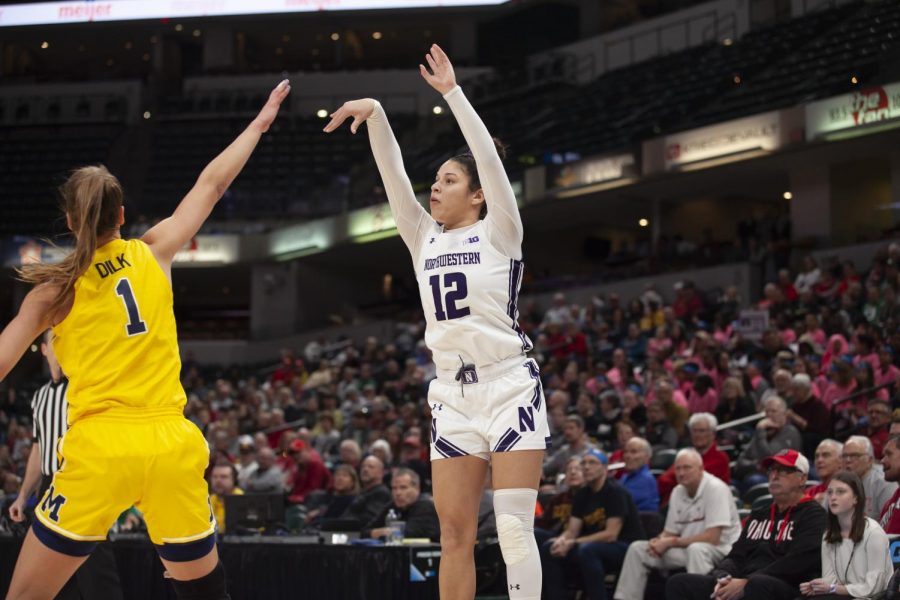 Revenge is sweet. Moving on to the tournament semifinals is sweeter.

Northwestern came to play in the Big Ten quarterfinal matchup against Michigan on Thursday, delivering a statement 65-49 win over the Wolverines at Bankers Life Fieldhouse. The Cats had lost three straight to Michigan, dating back to last year’s loss in this very same quarterfinal matchup.

From tip off, the Cats came out aggressively, playing their high-pressure “Blizzard” defensive scheme and pushing the pace on offensive transitions. NU’s opening play emphasized adjustments from last Saturday’s rendezvous with the Wolverines.

Defensively, the Wildcats forced Michigan to take shots from behind the arc, a strategy they deployed against Illinois on Wednesday. NU started doubling the ball whenever it reached inside the paint, especially when it was in the hands of junior forward Naz Hillmon.

Junior guard Veronica Burton led the defensive double team scheme, forcing three Wolverine turnovers including a shot clock violation in the first quarter. Burton stood out offensively in the first quarter with a mesmerizing, fast-paced transition behind the back layup.

“I think we brought a different energy and a different mentality,” Burton said. “We wanted it more than them, and I think that was evident from the first tip.”

But the Wolverines were not going to let the Cats keep their four point lead heading into the second quarter without a fight. Michigan junior guard Leigha Brown came alive defensively, causing NU to struggle driving inside the paint.

After an NU timeout, the Cats stepped back on the court with more grit, determined to play faster to keep up with a speedy Michigan team. The Cats and the Wolverines went back and forth in the second quarter with nine separate score ties in the game.

Burton and Hillmon led the scoring for their respective teams with 25 and 26 points. The half closed with another tie game, a completely different scoreline than in March when NU was down by five points at the half.

However, the Wolverines outrebounded NU 27-18 in the first half, which also happened during Saturday’s matchup. The Cats needed to grab more rebounds to stop Hillmon from converting shots off the backboard into points.

Burton, the two-time Big Ten Defensive Player of the Year, started the second half with the same intensity as the first. She caused Hillmon to draw a charge on a drive down the lane and then hit a jumper on the offensive end of the floor.

“When we have a breakaway, I’m trying to be aggressive, and that’s been my mindset,” Burton said. “The open court is one of my favorite places to be, so I’m gonna attack the rim at all costs.”

NU kept up the intense play during the third quarter, grabbing rebounds and capitalizing on their second chance offense opportunities. The Wolverines couldn’t stop senior guard Lindsey Pulliam’s shooting. She went 4-for-5 from field goal range in the quarter, hitting one of her signature “Pull-Up Pulliam” jumpers with over four minutes left in the third.

The Cats slowed down the pace of play in the third quarter, showing signs the team had control of the game. Their defensive dominance silenced Hillmon to only four points throughout the entire ten-minute frame. NU outscored the Wolverines 35-19 in the half, extending their lead to 14 points with under five minutes left in the game.

For the remainder of play, NU went on a 8-6 scoring run, preventing Michigan from claiming a third victory over the Cats this season. As Pulliam stated after Wednesday’s game against Illinois, NU “had a chip on their shoulder” playing the Wolverines.

NU will continue its Big Ten Tournament run Friday afternoon against the No.1 seeded Maryland Terrapins.

“Tomorrow, I feel confident the way we’re defending right now, and we have a good plan defensively,” coach Joe McKeown said. “We have to make sure we shoot the ball better than how we shot against (Maryland) a week and a half ago.”

— Women’s Basketball: Northwestern advances to the next round of the Big Ten Tournament with third Illinois defeat this year