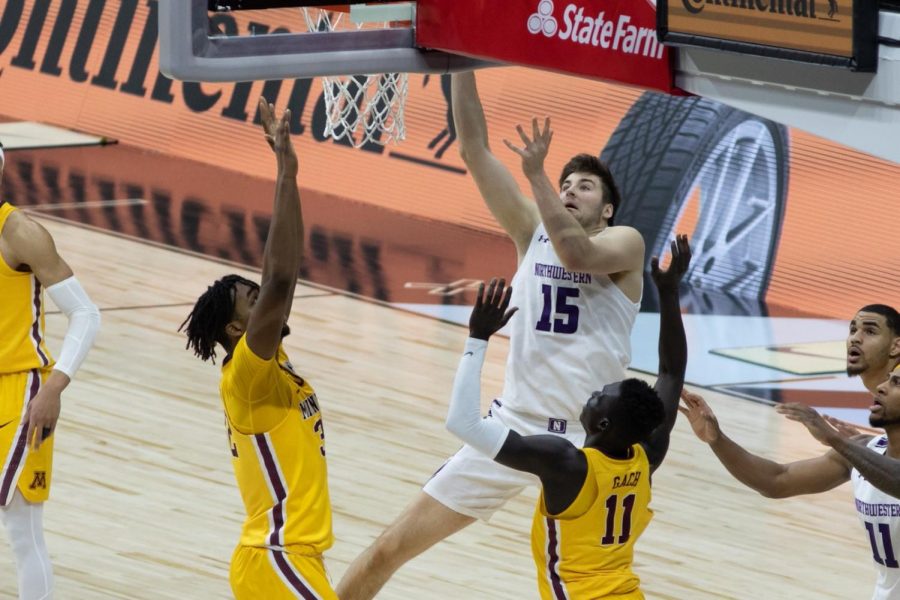 In the opening minutes of their Big Ten Tournament first round matchup against Minnesota, Northwestern hardly looked the part of a Big Ten team.

Under the bright lights of Lucas Oil Stadium, the Wildcats found themselves in a 16-2 hole early, but rallied and took the lead in the second half. The comeback was reminiscent of NU’s effort a couple weeks earlier, when the Cats recovered from a 17-3 deficit against the Golden Gophers to snap a 13-game losing streak.

“We gave ourselves the chance to win,” coach Chris Collins said. “They played well, they beat us and deserved to win.”

In the opening game of the Big Ten Tournament, the battle between the No. 12 and No. 13 seeds in the conference fit its billing. The teams combined for 31 turnovers, a 15-for-36 performance from the free throw line and 97 points.

Even Minnesota star guard Marcus Carr, an AP All-Big Ten selection, finished the night 3-for-10 from the field with six turnovers.

“We wanted to shrink the floor,” Collins said. “We wanted him to pass. I’ve seen him score 40 too many times and he can single-handedly win a game.”

NU succumbed to its recent trend of slow starts by scoring just two points through the game’s first 11 minutes. But strong defensive play allowed the Cats to climb back into contention. NU sent double teams and constant pressure at Carr, who had just two points in the first half, and forced the Golden Gophers into nine turnovers in the frame.

The Cats took their first lead on a Miller Kopp putback and stretched their lead to as many as seven points with four minutes left. Despite open looks and Minnesota’s rough performance from the free throw line, NU couldn’t capitalize on its opportunity and close out the win.

After getting locked down by the Cats’ defense for most of the game, Carr took over in the final minutes, hitting a pair of back-to-back jumpers to catapult the Golden Gophers into the lead with 2:01 left. When NU’s Boo Buie fouled Carr on a three-point attempt, the junior guard put the finishing touches on the Cats.

Though the Cats played one of their strongest defensive games of the season, the offensive malaise proved too much to overcome. Junior forward Miller Kopp finished 4-for-18 from the field while Nance was 3-for-11, and NU did not have a player score in double figures.

The Cats’ 2020-21 season concluded in similar fashion to their last one — a Big Ten Tournament loss to Minnesota that made them the first team eliminated from tournament play — but Collins was adamant about his team’s progress. NU doubled its conference win total, including wins over multiple ranked squads.

“We got better collectively, we got better individually,” Collins said. “Tonight was disappointing because we were confident, we were ready to play. It just wasn’t our night.”