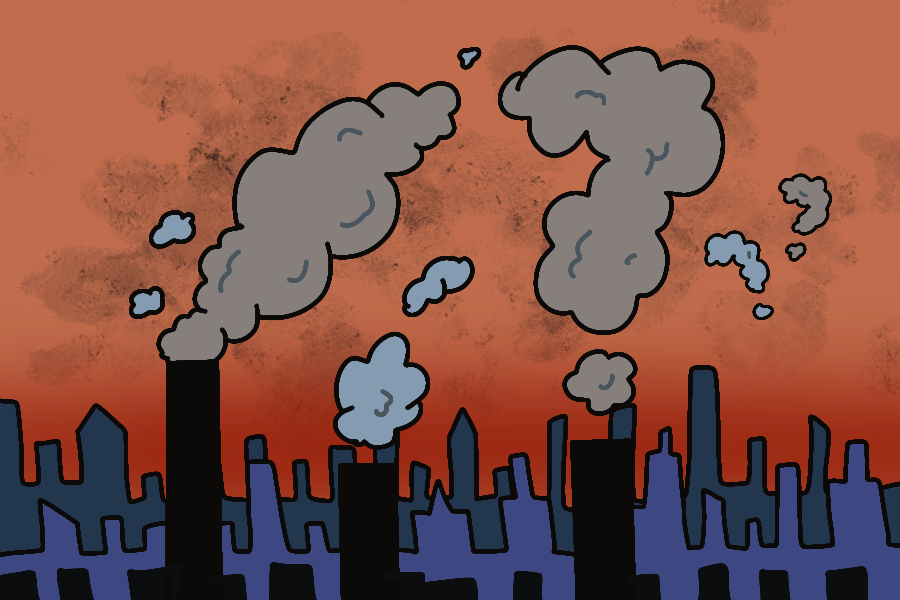 Data shows there were demonstrable effects on Chicago’s air quality in 2020. Looking forward, experts advise against using the COVID-19 lockdowns as an example for a solution to the climate crisis.

Every year, the EPA releases Air Quality Index data, measuring daily regional air quality reports on a scale from one to five hundred.

“Weather is a highly variable, chaotic thing,” Horton said. “If we compare this year’s February to last year’s February, I think we’re gonna see some big differences in the weather. Those differences would have an influence on the AQI.”

Moreover, he said EPA monitors only measure a miniscule section of a larger area — such small points can’t be extrapolated for all of Chicagoland. Other measuring tools, including remote sensing satellite data, can be used to gain a clearer picture.

In a study published by the American Geophysical Union, satellite data measured atmospheric concentration of nitrogen dioxide gas. The gas is produced by burning fuel and reflects pollution output, an important distinction from air quality. The study found nitrogen dioxide concentrations had significantly decreased, indicating a decrease in Chicagoland pollution of about 14 percent during the early lockdowns in March and April of 2020.

While COVID-19 lockdowns were effective in reducing pollution, Horton cautioned against using mandates comparable to coronavirus-prompted lockdowns to rein it in long-term.

“There was no policy implemented. There was a reduction in traffic, essentially,” he said, calling such a drastic traffic reduction unsustainable. “There’s been a ton of policy when it comes to air quality, and the Clean Air Act has been an absolutely resounding success in improving the air quality in the US.”

To this end, Evanston is implementing its Climate Action and Resilience Plan, comprising a series of initiatives to address pollution in northern Cook County.

The city participates in the Solarize Chicagoland program, for example, which works to make solar panels more accessible and affordable for county residents. Unlike conventional methods of energy production, like burning fossil fuels, solar panels do not produce harmful emissions when generating electricity.

Joel Freeman, a co-chair of CARP, said programs like these increase solar participation, but have limitations. Installing solar requires sufficient roof space, angles and other technical specifications, he said.

Evanston has been a part of the program for over two years and Freeman said the city plans to continue participating in future campaigns. He also said the city also plans to update the city’s energy conservation code to exceed statewide protocol.

However, keeping up with energy code via installing new infrastructure, insulation and other energy improvements comes at a cost, Freeman said. Acculturation to a green-energy society entails dismantling systemic economic barriers, he added.

“We don’t want to put undue burden on those who are already burdened beyond what we think is acceptable,” Freeman said. “Some of those financial mechanisms are going to be part of the focus fairly soon, because we’ve got to get everybody on board.”

Through CARP, Evanston aims to implement complete renewable energy for all city properties by 2030 and prioritize racial equity to support low-income and vulnerable residents. This includes providing funding and assistance to those incurring higher costs for utilities and infrastructure due to their systemic vulnerability.

This focus on equity is inextricably linked to the climate crisis, and vital to its solution, said SESP senior Georgia Caras. Caras said many climate change organizations fail to address the intersectionality of climate change. Even if the metrics measuring air quality and pollution are foggy, she said focusing on the people most impacted is the best way to curb the climate crisis.