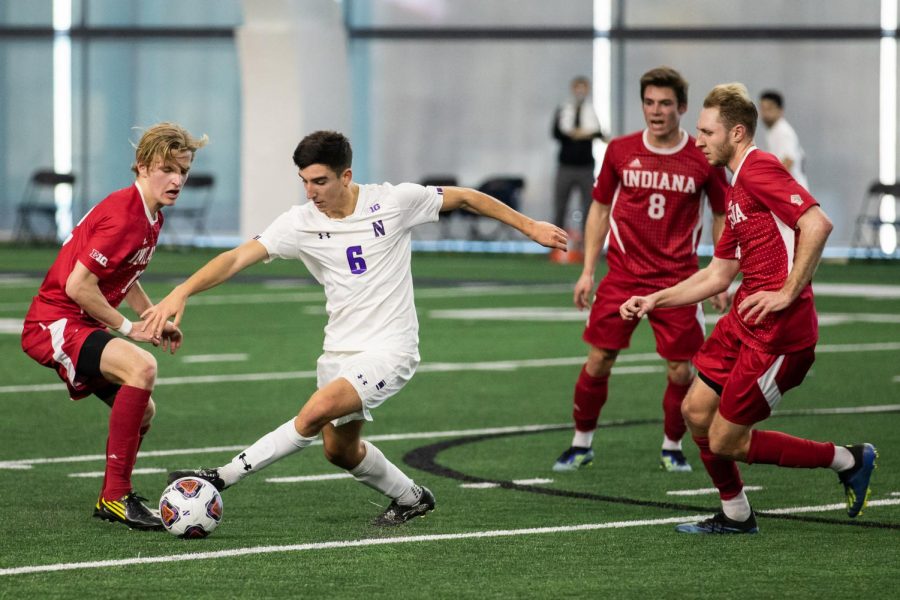 Vicente Castro fights for the ball. The sophomore midfielder scored a goal in Northwestern 4-2 loss to Ohio State.

Coach Tim Lenahan knows Northwestern plays in one of the hardest conferences in the country against some of the top talent in college soccer.

It’s why he quotes assistant coach Chris Leer, who likes to say “they don’t call it the little ten, they call it the Big Ten.”

If Lenahan’s squad needed a reminder, they got one after falling 4-1 to Michigan — a 2019 College Cup regional semifinalist — in their season opener. But since then, the Wildcats have racked up some big wins.

Four days after losing to the Wolverines, NU defeated Wisconsin 5-2, then beat eight-time national champion Indiana 1-0 at Ryan Fieldhouse in regulation for the first time since 2009.

Lenahan credited his team’s upset victory over the Hoosiers to the players’ being “locked in the whole day.” For the first 21 minutes of Sunday’s game against Ohio State, the Cats followed the same strategy as sophomore forward Ugo Achara Jr. scored in the 10th minute and the team outshot the Buckeyes four-to-one.

But Ohio State soon took control, firing six shots — including the game-tying goal — to NU’s one shot in the following 24 minutes. Ohio State (3-1, 3-1 Big Ten) then parlayed its strong offense into the second half by adding three more scores to defeat the Cats (2-2, 2-2 Big Ten) 4-2 in Columbus.

“We took our foot off the pedal,” Lenahan said. “We got sloppy and then the other team gained a lot of momentum. One of the things that this team has to learn how to do is that… when we do make a mistake… (to) not fall apart.”

Similar to its loss against the Wolverines, NU took the lead on an early goal but lost it in the final 45 minutes. The Buckeyes fired 16 shots — with nine coming in the second half — and took eight corner kicks, while the Cats only mustered nine shots and four corners.

In the opening minutes of the contest, NU seemed to be the team in control, maintaining possession inside the Buckeyes’ third and preventing offensive opportunities from the scarlet-and-grey.

The Cats’ strong offensive attack was punctuated by Achara Jr.’s goal, his fourth in three games, the result of a great series of passes.

“He’s grown as a very dangerous striker in this league,” Lenahan said. “Last year, he tried to dribble four guys every time he got the ball. So he’s learning a little better that you want to beat one guy, dish it off and then get yourself in a spot and score a goal. ”

The Cats continued to find opportunities as Achara Jr. attempted another shot nine minutes later that went left of the net and freshman midfielder Rom Brown had his free kick saved by Lawrence in the 20th minute.

But for the next 20 minutes, NU failed to take a shot, while the Buckeyes took five, including the equalizing goal from freshman midfielder Parker Grinstead.

Out of halftime, Lenahan could sense the momentum shifting towards Ohio State and wanted to move five players to the back to prevent scoring opportunities. But right as Lenahan prepared to sub in senior defenseman Garrett Opperman, the Buckeyes scored off of a corner kick in the 62nd minute.

After the Cats blocked two consecutive shots, defenseman Sean Ryan found the ball outside of the box and sent a hard shot towards the goal while sliding to the ground. His attempt flew right past the hands of a diving senior goalkeeper Miha Miskovic and into the right corner of the net.

17 minutes later, Ohio State extended its lead to 3-1 after Buckeyes midfielder Luke Kiley tapped a shot to the left of Miskovic, who left the goal to stop Kiley, and into a wide-open net.

The teams exchanged goals in the final five minutes as Grinstead nailed a penalty shot and Castro scored off a long throw-in from graduate defenseman Spencer Farina.

With a match upcoming Thursday against Michigan State, Achara Jr. knows how important it is for the Cats to return to the victory column.

“Especially coming off our win against Indiana, we definitely have some eyes on us right now as a good team,” Achara Jr. said. “So teams are not going to come easy at us… and we need to recognize that.”