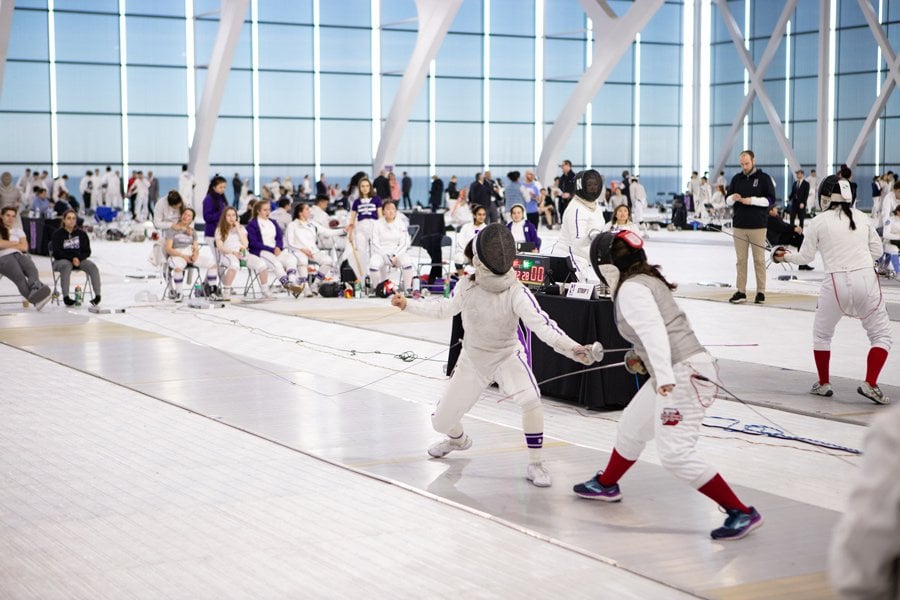 Northwestern fencers during a meet. This weekend, the Cats lost twice to undefeated Notre Dame but split their series against Ohio State.

Northwestern traveled to South Bend this weekend with one goal in mind: to beat undefeated Notre Dame.

But the Wildcats (13-9) failed to do so, losing both matches to the Notre Dame (14-0) in the DeCicco Duals. But NU performed well overall, splitting matches against Ohio State on Saturday and sweeping Lawrence on Sunday.

The Fighting Irish are as dominant as they come in collegiate fencing; they won back-to-back national championships in 2017 and 2018, and Coach Zach Moss called them the best team in the country again this year.

NU fell to Notre Dame 19-8 in both matches. The saber team nearly came out on top, falling 4-5 in both matches, but the foil and epee teams struggled against the Fighting Irish steel.

“That’s the best anyone’s done against them all year,” she said. “We were in pretty much every single match, and a lot of the time it came down to one point at the end, or really close calls.”

NU has won eight or more bouts against Notre Dame in 3 of 4 matches this season; no other team has won more than seven. But despite several close matches, the Cats remain winless against the Fighting Irish in the last decade.

Freshman sabre Sky Miller went 3-0 against Notre Dame and finished 6-2 overall in her bouts on Saturday. Junior epee Julia Falinska also performed well, ending the day with a 7-2 record on her dasher.

“You have to be perfect against Notre Dame,” Moss said. “We learned a lot. We’re not that far off and I think we can get there.”

NU also faced off against rival Ohio State (10-5) on Saturday. The Cats rode a 7-2 epee performance en route to a 16-11 victory in the first match. But NU struggled in the second match, falling 17-10 despite a 5-4 showing by the foil team.

The Cats will get another chance against the Buckeyes next weekend, as they travel to Columbus this Saturday for the Ohio State Duals.

On Sunday, NU returned home to face Lawrence, winning both matches by scores of 23-4 and 26-1. Before the matches, the team held a senior day celebration, live streamed to fans and families. Banbury said the team worked hard to make the experience special for the seniors, giving gifts at practices throughout the week and making signs for the celebration on Sunday.

“Everyone put in so much effort to make it a special week,” she said. “Everyone was really happy.”

This weekend’s matches will be the last for the Cats before the national championships. There will be no conference tournament this season. Moss said he is impressed with the team’s growth over the course of the season, and looks forward to the final weeks of competition.

“I saw a lot of things that made me excited for this weekend and the NCAA championships,” he said. “We’ve gotten to the place we want.”