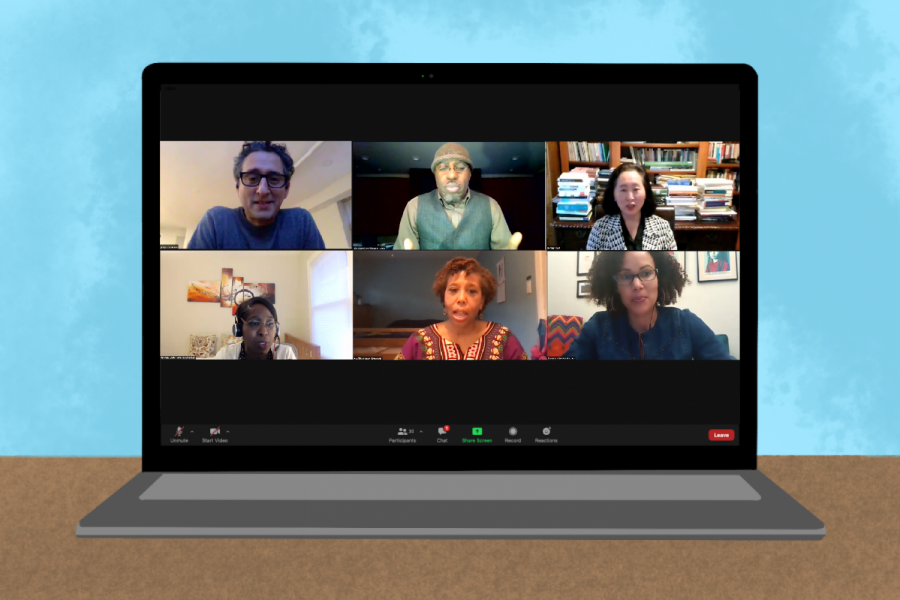 Panelists and moderators speak at various points in the conversation. Each panelist answered questions about their experiences with racism at Northwestern and frustration with the University’s response.

Faculty of color discussed experiences of racism on campus, frustration with the University’s lack of support and its impact on students in a Monday panel.

Moderator Shannon Barlett, associate dean of inclusion and engagement at the Pritzker School of Law, said she organized the event after conversations with African American Studies Prof. Barnor Hesse made her realize the two shared similar concerns despite holding different positions on different campuses. Bartlett and Hesse were joined by four other faculty members in the conversation.

Barlett said two aspects of the University’s response to social unrest over the summer and fall motivated the conversation: first, a lack of recognition about the way racism affects faculty and staff, and second, a lack of acknowledgement about how Northwestern “largely operates with indifference to or even an ignorance of structural racism.”

Other panelists also spoke to specific experiences of exclusion and discrimination across campus. Spanish and Portugese Prof. Jorge Coronado, a native of Chicago, said he has had people compliment his English and mistake him for other Latino faculty members. Hesse said he once had a police officer question whether the office he was sitting in was his, prompting him to constantly carry around multiple forms of identification.

“It really is this sense of being in a space where I think about myself in terms of how other people are seeing me — whether I can be my authentic self, whether I’m making White people comfortable enough,” Greenwell said.

Hesse said the “draining” nature of navigating situations with predominantly White people deters him from getting involved outside of his department.

Hartung added that the chilling effect is especially true for non-tenured faculty such as herself who fear retaliation if they speak up about their experiences.

According to Greenwell, that silencing effect trickles down to students, who then struggle with identifying which faculty members they can turn to for support when they experience marginalization. That in turn puts more pressure on those faculty who do speak out, she said.

“For those of us who do try to support students, our overload is huge,” Yuh said. “It’s not just a matter of time and energy, it’s a matter of a certain kind of emotional toll.”

Yuh said she felt the administration has had “no real response” to student activists’ demands and in fact regressed in progress, despite increased campus activism and awareness. Though the University has held several focus groups, surveys and outside consultants, Barlett said it’s unclear what happens to the information they collect.

Part of that failure, Hesse said, is due to the University’s engagement with diversity through the White gaze. According to Hesse, the University rarely engages with the expertise its faculty members hold in issues of race, diversity and colonialism.

While Yuh said the panel demonstrated how faculty can come together to reckon with the University’s “racist past and present” without the administration, Barlett said she still hopes the University will start addressing racism at a systemic level.

“We want this to be the beginning, and not the end,” Barlett said. “We look forward to hearing how University leadership is going to take the lead here instead of being pulled along by faculty members of color.”