Tennis: No. 7 Northwestern women’s defeats Michigan State and falls to No. 26 Michigan, No. 29 Northwestern men’s dominates 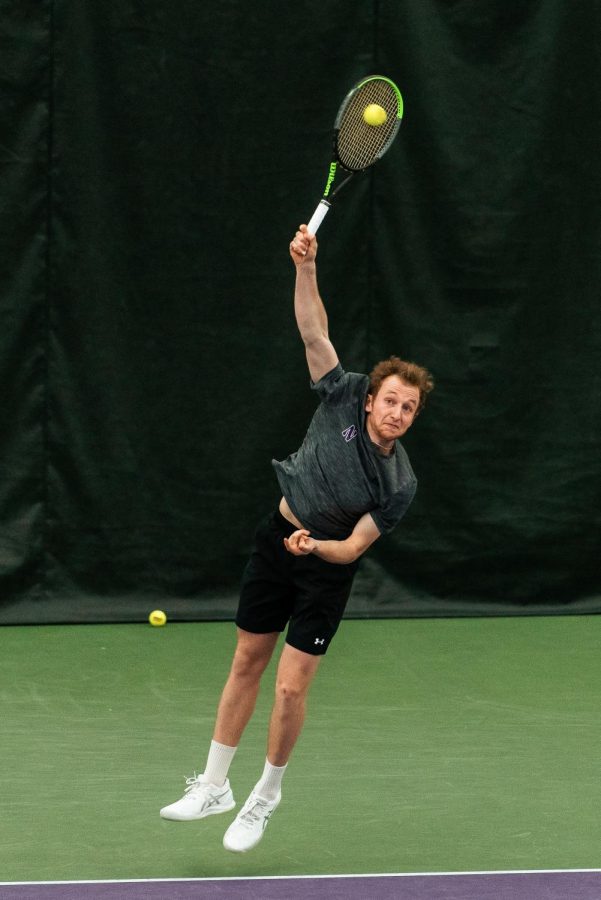 Freshman Gleb Blekher takes a serve.Northwestern tennis had a busy weekend, as the women headed to Michigan and Michigan State and the men faced off against Iowa and Nebraska.

Northwestern women’s tennis struggled against Michigan and Michigan State this weekend, while the men dominated Iowa and Nebraska.

Coach Claire Pollard said it was a difficult weekend for the team, but she is still happy about the Cats’ progress despite the results.

Michigan’s upset victory places them alone atop the Big Ten standings. Pollard said Michigan was a stronger team than their ranking suggested.

“We’re going to have another tough battle with them in a month’s time, and hopefully we can improve some things and get them next time,” Pollard said.

Despite the team results, some had successful weekends. Junior Clarissa Hand improved on an extremely successful season by sweeping all her opponents. Sophomore Christina Hand and Briana Crowley won from the No. 2 doubles spot on Friday and Sunday. Christina, Clarissa and Crowley were the only NU players to sweep their weekend matches.

The team will return to the court against Nebraska on Friday in Evanston. Pollard said fatigue from competition is starting to set in, and the team will focus on recovery ahead of their next matches.

Coach Arvid Swan said he was pleased the team got the doubles point both Friday and Sunday, which allowed them to build momentum ahead of the singles matches.

“Competitively, in all spots, we did a really good job over two quality opponents,” Swan said.

The team swept Nebraska in singles and only lost one of three doubles matches. Against Iowa, the Cats took the doubles point 2-1 and won five of six singles competitions.

“We brought a lot of energy to the court, which is always important when playing teams in the Big Ten,” Brookes said “We always say to ourselves, ‘There’s no easy matches in the Big Ten.’”

The team will next play against No. 9 Illinois on Sunday. Swan said he is excited at the prospect of playing an in-state rival, but the Cats will need a “complete performance” to succeed.

For Brookes, it’s a matter of carrying over what helped NU succeed against Nebraska and Iowa.

“It’s a case of doing what we did well this weekend, which is bringing energy to the court and believing in what we do and having confidence in how we play,” Brookes said.