Women’s Basketball: Northwestern misses out on top-four finish with loss to No. 12 Michigan 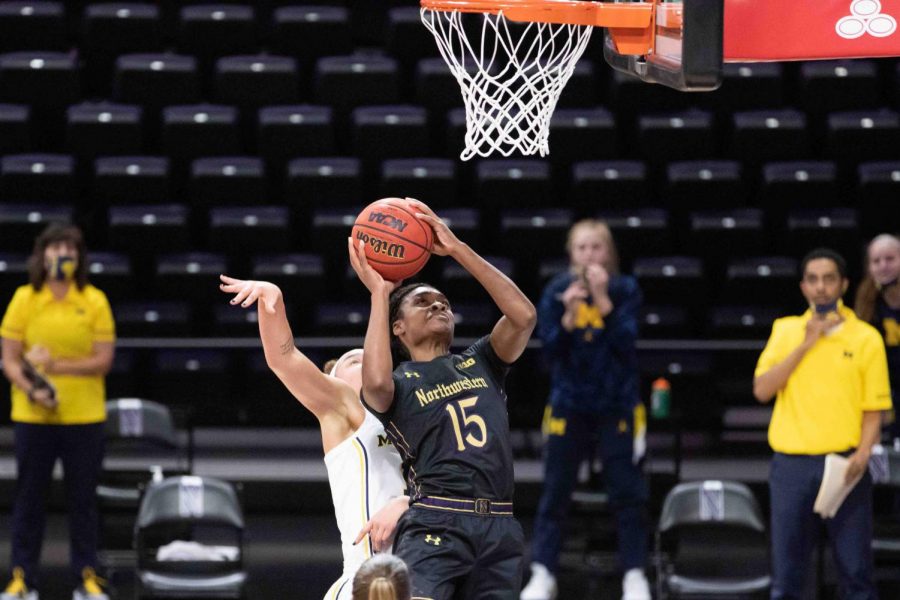 Courtney Shaw puts up a layup. The junior forward returned to action after a nine-game absence in NU’s loss at Michigan.

Two months after Michigan put 55 points on Northwestern in the first half at Welsh-Ryan Arena, the Wolverines didn’t hit that number until early in the fourth quarter.

But the Wildcats still lost. They didn’t reach 55 until the final minute.

The loss cost NU the No. 4 seed in next week’s Big Ten Tournament, which would have meant a double bye.

“We did a great job defending their shooters,” coach Joe McKeown said. “The game at Northwestern, they just made everything. We could never get our feet under us. But today, defensively, we did a great job. They can score inside out.”

Michigan led for the final 38 minutes, and early on it looked like a replay of the game in early January, with Amy Dilk and Leigha Brown hitting three-pointers in the first three minutes to help the Wolverines race out to an 8-2 lead. But then the Cats’ defense stiffened, as it has done in just about every game this year. NU, which is ninth in the country with more than 21 forced turnovers per game, forced 19 Saturday, 12 of them in the first half.

Converting those turnovers into points was another story. Junior guard Veronica Burton, who had 19 points and three steals, hit a three early in the second quarter to trim Michigan’s lead to one. But then both teams were scoreless for more than three minutes, and NU didn’t make another field goal for more than two minutes after that. Dilk’s three-pointer in the final minute of the half gave the Wolverines a five-point lead at the break.

The Cats benefitted in the post from the return of junior forward Courtney Shaw, who had missed the previous nine games due to a lower-body injury. Without Shaw, many of NU’s opponents feasted inside, with such post players as Iowa’s Monika Czinano and Indiana’s Mackenzie Holmes putting up big numbers.

Shaw, who split the playing time Saturday with freshman forward Paige Mott, went up against arguably the Big Ten’s best post player in Michigan’s Hillmon. Hillmon finished with 19 points and 13 rebounds while Shaw had nine and seven, respectively.

“It was unbelievable to get (Shaw) back. We missed her,” McKeown said. “We’re a small team, so to have somebody who can rebound at that level is really exciting for us going into the Big Ten Tournament and the NCAA Tournament.”

The second half followed a similar script as the first. The Wolverines extended their lead to 13 in the third quarter before the Cats used a 10-2 run early in the fourth to pull within four. But NU, which had made less than 40 percent of its shots in five of the last six games, did so again Saturday.

The Cats’ 34.4 percent shooting performance derailed any thought of a comeback. Senior guard Lindsey Pulliam joined Burton in double figures with 11 points, but she shot just 4-for-17 from the field.

NU will be the No. 5 seed in the Big Ten Tournament in Indianapolis, and Wednesday will play the winner of a first-round game between Illinois and Wisconsin. If the Cats win, they will play Michigan again in a quarterfinal on Thursday, which would be a chance for revenge after the Wolverines upset NU in the same round last year.

“I think it’s the best league in the country,” McKeown said. “Look at how deep we are — maybe seven, eight teams in the NCAA Tournament. We’re the defending champs, so everybody came at us hard this year.”

— Women’s Basketball: Northwestern falls to No. 8 Maryland 62-50 on Senior Day