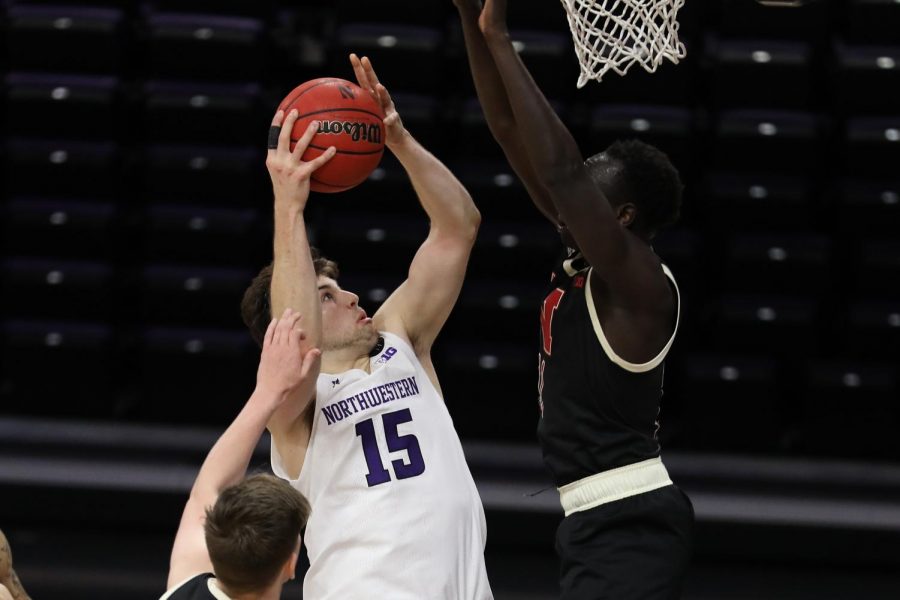 Ryan Young prepares to take the go-ahead shot. Young has hit field goals to put Northwestern ahead in the final two minutes in back-to-back games.

After frittering away an early 16-point lead against Nebraska, the Wildcats edged out the Cornhuskers 79-78 Sunday thanks to a second-chance layup from Young with :02 to play. It was Young’s second consecutive game-winning shot, following a go-ahead layup against Maryland with 1:30 left on Wednesday night.

“These last two games, we felt like (our advantage) was playing through Ryan Young late,” coach Chris Collins said. “He’s delivered, which is awesome. I’m really proud of him.”

In a game in which NU shot 53 percent from the field, Young only took five shots, made three, and scored six points in 16 minutes.

“We’ve been through a lot of highs and downs this year. Some guys have had to take different roles,” Young said. “Something that’s really good about our team is how versatile we are, that a lot of guys can come off the bench and have huge games.”

On NU’s final possession, sophomore guard Boo Buie brought the ball upcourt and passed it to junior forward Pete Nance. Nance tried a running skyhook from just outside the paint, but missed. Young collected the rebound, his sixth of the contest, and sank the basket over Nebraska forward Lat Mayen. Cornhuskers guard Kobe Webster’s desperation heave at the buzzer was offline, and the Cats had their third straight win.

“Nebraska, they’re a bit undersized,” Collins said after the game. “We just felt late in the game their perimeter defenders were doing a really good job on Chase and on Boo. Down the stretch, we played through Ryan on three or four different possessions.”

Young, who started every game of the 2019-20 season, has started on just five occasions in 2020-21.Collins has preferred to use him off the bench. He has played more as the season has progressed, with his monthly minutes per game average jumping from 15.5 in December to 24.8 in February.

The results have largely worked to NU’s benefit, as Young played four consecutive games in double figures against Penn State, Rutgers, Purdue and Indiana and came up big at closing time against Maryland and Nebraska.

“Something I take a lot of pride in, as somebody who started every game last year and has been coming off the bench a majority of this year,” Young said, “is thinking outside the box, and finding other ways to be a leader on this team and be an efficient player.