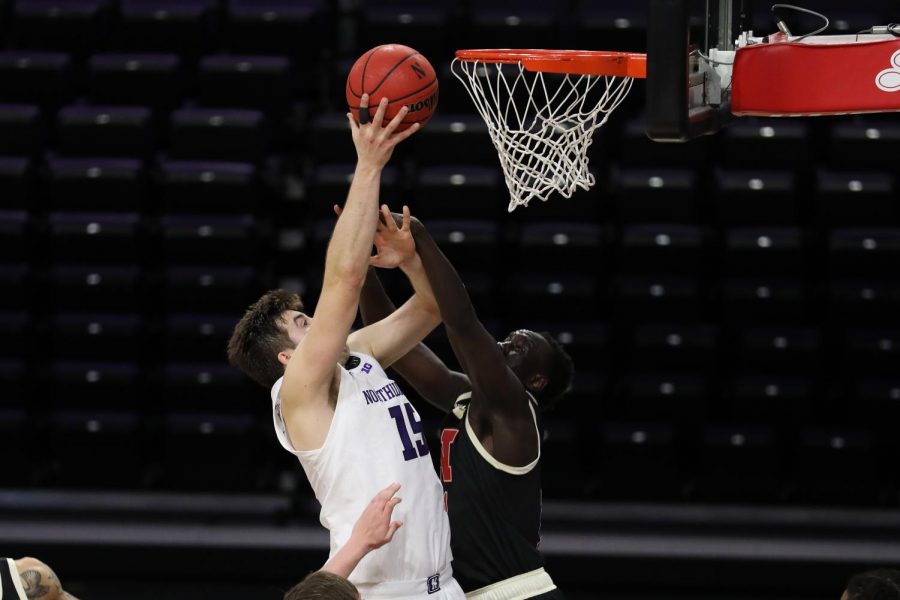 Ryan Young makes the game-winning play. The sophomore center scored on a putback to give Northwestern its third straight win.

Northwestern won the first three games of the Big Ten regular season, and its last three, ending the regular season with a last-second 79-78 victory over Nebraska.

After missing the opening free throw of a one-and-one that could have given the Wildcats (9-14, 6-13 Big Ten) the lead, sophomore center Ryan Young made the game-winning putback.

“Pete (Nance) had an open lane to drive,” Young said of the play. “He made a great play. He attracted three guys and got it up on the glass. I was left free, because so many guys were attracted to that layup, and I was able to rebound and put it back in.”

But early in the game, it didn’t seem like the final score would come to that.

NU raced out to an early lead, up to 14 points in the first half. Sophomore forward Robbie Beran, in one of his best games of the season, led the Cats with 10 in the first.

Since NU’s Feb. 13 contest against Rutgers, the team has struggled to score points, but the Cats quickly found their shooting rhythm on Sunday. NU shot 54.8 percent from the field in the first half, and the 79 point total was the Cats’ highest since Dec. 20 against Michigan State.

NU’s lone senior, walk-on guard Eric Zalewski, started the first game of his Northwestern career Sunday. Zalewski’s steal in the opening minutes helped galvanize the team and kicked off their first half run.

“There’s not a better kid in our program,” coach Chris Collins said. “Behind the scenes, the guy’s a leader. It was only fitting to give him the start tonight, and he did a great job, he came in and got on a loose ball.”

Though the Cornhuskers turned the ball over nine times in the first half, the Cats were only able to score six points off those mistakes. With NU up nine points at the halfway mark, those missed opportunities seemed unimportant. But after Nebraska came into the second half with a new energy, those unscored points loomed large.

After halftime, the Cornhuskers pulled the score to within three at 41-38, before sophomore guards Boo Buie and Chase Audige hit three shots from behind the arc, to pull the Cats back up 54-43.

But the offensive onslaught from Nebraska wasn’t over. Guard Kobe Webster, who scored only three points in the first half, went 6-for-8 from the three point line. Whenever NU hit a big shot to pull ahead, it seemed like Webster was right there to bring the Cornhuskers back.

“Try to find Kobe Webster at some point was the first message,” coach Chris Collins said of his second half strategy. “That guy, he was awesome. He was really hurting us in the second half.”

With just over four minutes to play in the second half, Nebraska took its first lead since the opening minutes from a Webster layup. But in the final minutes, junior forward Pete Nance stepped up , hitting two free throws, a layup, and a sky hook that gave the Cats the lead back with a minute and a half to play.

When Young missed the opening of the one-and-one, it felt like the game could have been over. But NU forced a Nebraska shot-clock violation on what could have been a game-sealing possession, and Young redeemed his missed opportunity.

The Cats are now the winners of three-straight games going into their opening round Big Ten Tournament matchup, a rematch against Minnesota. Young said these consecutive wins are giving the team the confidence to make a splash in the tournament.

“Wins are hard to come across in the best league in the country,” Young said. “When you get three straight, you’ve got to build off of it. We’re definitely one of the hottest teams in the league right now, and we know that we’re excited to see what we can do in Indianapolis.”