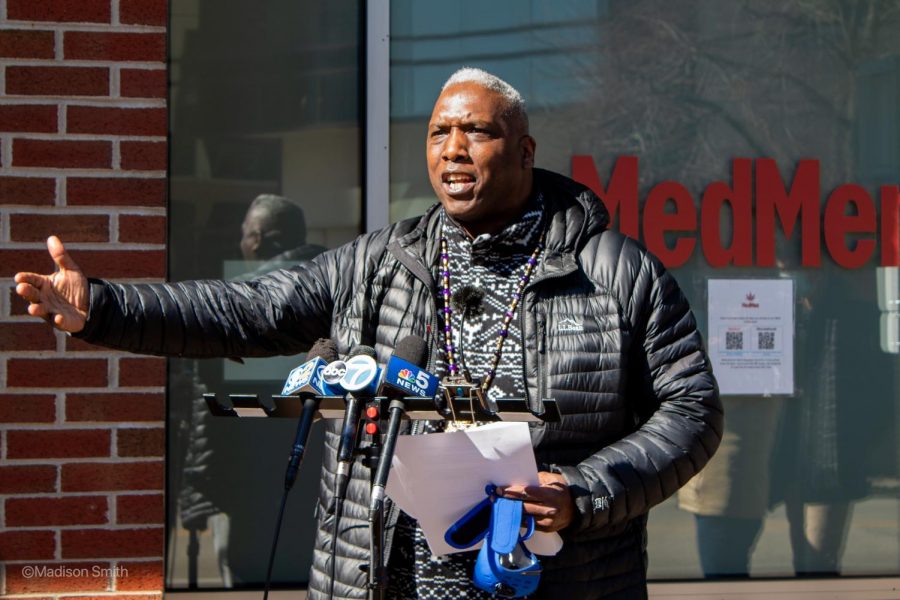 Evanston resident and E3R organizer Kevin Brown. E3R is opposed to the passing of Evanston’s proposed Restorative Housing Reparations program, and argues that action on it should be delayed.

The group, which launched on Facebook last Sunday, presented their criticisms of Evanston’s current reparations proposal to a crowd of residents and press. They said City Council should either delay voting on the proposal until after a new Council takes office in May, or designate the proposal as something other than reparations.

“This housing program is not what reparations means,” Sebastian Nalls, a former mayoral candidate and organizer with E3R, said. “It’s not all-inclusive, there’s no plan going forward.”

The current proposal, called the Restorative Housing Reparations program, would allocate $400,000 of the $10 million reparations budget to housing grants of up to $25,000 addressing homeownership, home improvement and mortgage assistance. City Council is expected to vote on the proposal this month.

The reparations subcommittee started holding deliberations that included opportunities for community input on program priorities nearly two years ago where residents deemed housing to be a top priority. Eligible grant recipients include those who can demonstrate they have experienced housing discrimination at any time, or are direct descendants of a Black resident who lived in Evanston between 1919 and 1969.

Resident and E3R organizer Kevin Brown said since Evanston will be the first city in the nation to put a reparations program into action, so what the city categorizes as “real reparations” will have a great impact on possible programs elsewhere. He pointed to a similar housing grant in San Francisco as evidence that Evanston’s program should not be labelled as reparations.

“Not only is it important for the Evanston community, it’s important for African Americans all over the United States of America,” Brown said. “We don’t want a program that is not reparations to be represented across the country that will have a negative impact on other Black people across America.”

Evanston Fight for Black Lives organizer Sarah Bogan said the use of mortgages and loans for reparations needed to be “reevaluated,” and that more inclusive and direct stimulus should be explored.

Bogan told the Daily the use of housing loans funded mostly by tax revenue from MedMen shows an unnecessary limitation in the ways reparations can be carried out in Evanston.

Bogan also said that the use of mortgages and loans for reparations needed to be “reevaluated,” and that more inclusive and direct stimulus should be explored.

Partway through the demonstration, resident Dr. Michael James arrived with a pair of conga drums, and began to play and chant between speakers.