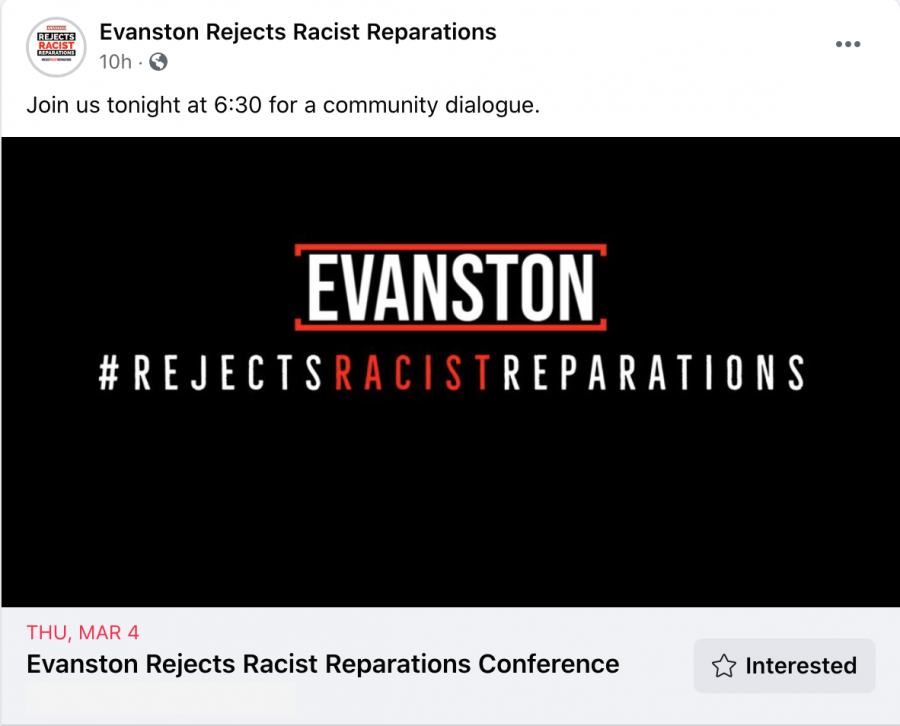 Facebook invite for Thursday’s community forum. Evanston Rejects Racist Reparations hosted the event to explain their criticisms of the Restorative Housing Reparations program, and to field questions from residents.

Stakeholders from Evanston and across the country debated the city’s proposed reparations program Thursday night, questioning transparency, public input, and the practices falling under the reparations category.

Nalls said ERRR’s main concern is that limiting the program to housing assistance through banks restricts stakeholder autonomy, therefore benefiting the banks more than the recipients. The current proposal, the Restorative Housing Reparations program, would designate $400,000 of the city’s $10 million reparations budget for housing grants of up to $25,000.

“We want to see an inclusive program that many individuals in Evanston can benefit from,” Nalls said. “We want to also allow residents to have the opportunity to do with their reparations as they will, not being boxed in and constrained to housing.”

The current goal, Nalls said, is for actions on reparations plans to be halted until a new City Council takes office after the Consolidated General Election on April 6. The current City Council is expected to vote on the Restorative Housing Reparations program on March 8.

Over 50 people were in attendance at the call’s peak, and comments came from Ald. Robin Rue Simmons (5th), aldermanic candidates Carolyn Murray and Devon Reid, resident Dino Robinson and a representative of Evanston Fight for Black Lives. Attendees from outside of Evanston also sat in on the meeting, including Kamm Howard, a co-chair of the National Coalition of Blacks for Reparations in America.

During public comment, Rue Simmons emphasized that Evanston’s local case for reparations centered on housing discrimination and the current proposal is only the first part of the city’s total plan.

“If there is consensus that different types of programming are appreciated more so than this… then those decisions will be made moving forward,” Rue Simmons said. “This is only one initiative out of many to come. There will continue to be a public process, just like there was in 2019 for us to get to this point.”

Cannon responded by questioning how the reparations subcommittee decided on housing as the avenue for reparations, and criticized the lack of choice that the program would provide recipients.

Under the current plan, Cannon said she is not able to touch the $25,000 allotment, and is instead forced to deal with banks which have “historically redlined and cheated” Black residents.

“I did not give anybody on your reparations authority committee to speak for me, or to decide how I am repaired,” Cannon said. “We did not have a choice in how we want to be repaired, and how this money should be used for our individual needs.”

Attendees also debated the broader meaning of reparations, and whether Evanston’s current proposal fits the definition. Howard said during N’COBRA’s time working with Evanston on reparations, they ensured that the resultant programming was repairative by addressing the historical crime of redlining with direct housing assistance.

An anonymous representative of Evanston Fight for Black Lives challenged this statement, arguing that Evanston’s position as the first city in the country to distribute reparations compels it to set a high standard for others.

“I don’t think we should be setting the bar so low for other cities,” the representative said. “I think it needs to be more genuinely reparative for those descendents.”

Several residents questioned ERRR’s own anonymity, as most members, other than Nalls and Cannon, remain anonymous, and City Council will soon vote on the proposed program.

Nalls responded that other members of ERRR could be susceptible to retribution, pointing to the earlier Zoom bombing incident.

“At the beginning of this call, even, there was an individual that came into here and called me the n-word, and mentioned me by name,” Nalls said. “And that is something that individuals that have taken our position have felt that they are at risk of.”

Such incidents are part of a recent pattern in Evanston, including the harassment and threatening of the Evanston/Skokie School District 65 superintendent and school board.

The full conference can be viewed on the ERRR Facebook page.

Correction: A previous version of this article misstated which body was involved in deciding housing as the avenue for reparations. The city’s reparations subcommittee has held deliberations for nearly two years that included opportunities for community input on the program’s priorities. The Daily regrets the error.