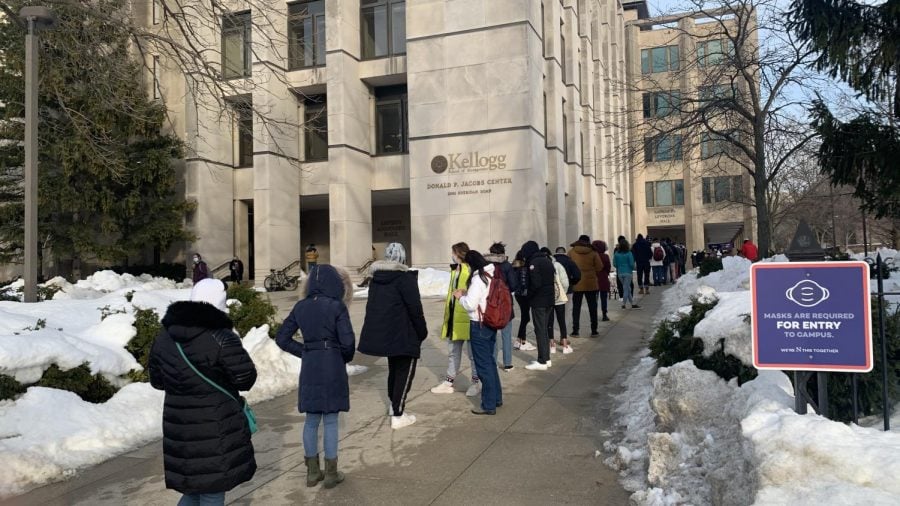 Students line up outside the Donald P. Jacobs Center waiting to get tested last Monday. After shipping-related delays canceled Color testing, many rushed to get a rapid test.

Due to an increase in the campus COVID-19 positivity rate, the University began requiring students to complete one Abbott rapid antigen test in addition to the typical Color test each week.

According to Chief Risk and Compliance Officer Luke Figora, the tests were initially piloted with smaller groups on campus. However, after winter storm-related shipping delays made Color testing impossible, the University was forced to shift toward large scale rapid testing ahead of schedule.

Unlike Color tests, where students are barred from taking more than one test a week, students can complete an antigen test as often as they like and receive the results within 30 minutes.

When some people in her dorm tested positive for COVID-19, Weinberg freshman Olivia Harbison said she got a rapid test everyday to ease her anxiety.

“I didn’t actually hang out with any of them, but I had brief conversations with a couple of them so I was still a little worried,” she said. “It was really helpful because I didn’t have to wait two days like I would for the Color test. I liked that I was allowed to do it as much as I wanted.”

Medill freshman Felisha Fan said she is also glad the University is offering rapid tests. Like Harbison, she appreciated that students can get as many rapid tests as they want.

Fan said the rapid tests can also help with contact tracing because the results come back sooner.

“With the rapid test you can identify within 30 minutes whether or not someone is positive, so that way we know they wouldn’t be contaminating anyone and they can quarantine right away,” Fan said.

On the first day the University started offering rapid tests, Fan had to wait 45 minutes in line before being tested, but said the process has been “quick and easy” since then.

Figora told the Daily there have not been any lines after last week, attributing the initial wait times to students not downloading and setting up the NAVICA app ahead of time.

“Anytime you turn something new live, there’s growing pains,” Figora said. “But round two, if folks have come in, it’s gone really quickly.”

On Monday, the first day students were presented with the choice between the two tests, Figora said there has been about a fifty-fifty split between the two.

While Medill freshman Matthew Weiss said requiring students to get tested twice a week is better than the previous policy, the requirement should have been implemented sooner.

Weiss said the testing policy is still “not operating at the maximum efficiency,” citing concerns over test accuracy and the inability to get tested on weekends.

“Most social events, if they were to happen, I imagine would be on Saturdays and Sundays,” Weiss said. “I just think the inability to get tested on Saturday and Sunday is ridiculous.”

Last week, Vice President of Student Affairs Julie Payne-Kirchmeier warned the NU community to “remain vigilant” and continue to take precautions even while getting tested.

Regarding accuracy, Figora said while studies on the effectiveness of rapid antigen tests are mixed, the University has seen more positive results from the Abbott test than Color test. However, he said, it is too early to suggest one test is more accurate than the other.

While there is concern antigen tests may yield false positives, Figora said all positive tests detected by the Abbott test have been confirmed by additional molecular tests.

“The nice part of what we’re trying to do for the rest of the quarter here is run these side by side and see what happens,” Figora said. “And if we find that these tests are performing better than some people expected them to in an asymptomatic population, that’s a good thing.”