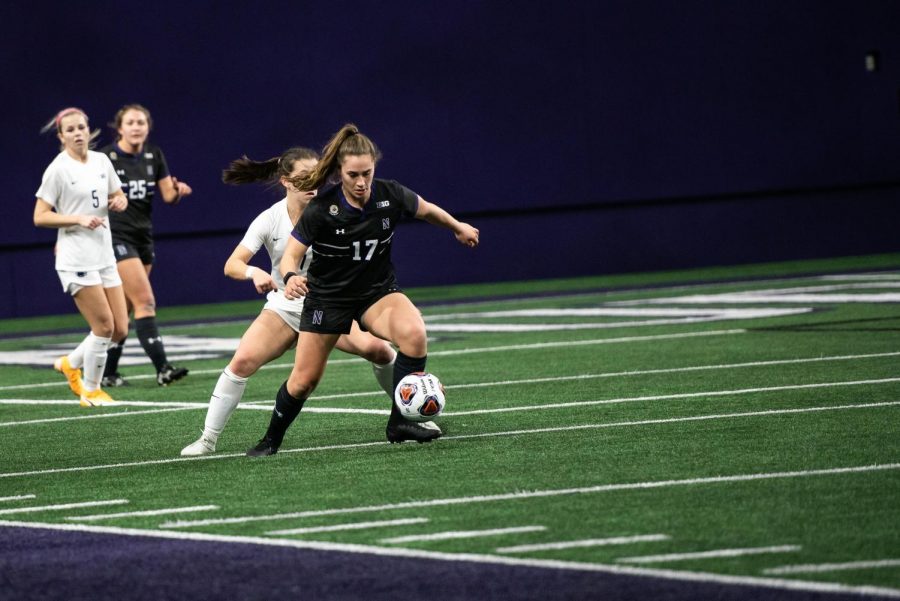 Sophomore midfielder Rowan Lapi with the ball Saturday against Indiana. Her 45th minute goal put Northwestern ahead of Minnesota Thursday. But the Cats would give up the lead in the second half, losing 2-1 in overtime.

If early season stats provided any indication, Northwestern’s Thursday matchup against Minnesota figured to be a defensive showdown. Both the Cats, (2-2-0, 2-2-0 Big Ten) and the Golden Gophers (2-1-1, 2-1-1 Big Ten) shut out opponents twice in their first three games of the 2021 campaign. The Cats were solid at the back, anchored by reigning Big Ten Defensive Player of the Week Hallie Pearson. So too are the Gophers as they limited Michigan State to just two shots on goal and only five shots total last week en route to their first win of the season.

For virtually the entire first half, that prediction rang true to form as both teams struggled to get anything going, until the last minute of the half.

On NU’s first corner kick of the game. Sophomore defender Marianna Annest’s corner try found its way into the middle of the box, where it lopped off a Northwestern attacker and right back into the feet of Annest. Her second cross into the box yielded much better results. Sophomore midfielder Rowan Lapi connected with the ball, sending it cleanly into the net’s top right corner, past the outstretched arms of Minnesota goalkeeper Megan Plaschko.

“I was just hanging around the back post ready to get on it,” Lapi said. “I kind of just saw a lane. [Annest] took a nice little cutter off a defender, found me pretty crisply on the ground. All I really had to do was just redirect it into the net.”

The goal was Lapi’s first of the year, putting the Cats into the driver’s seat entering the halftime break. They deserved it. NU limited Minnesota’s high flying offense to just 3 shots in the opening period, drawing four fouls in the process. Junior goalkeeper Mackenzie Wood only needed to make one save all half.

The wheels came off almost immediately in the second half. Minnesota’s offense unleashed an astonishing 16 shots in the frame, drawing nine corner kicks. They’d tie things up off a corner kick of their own in the 57th minute, when Katie Koker slotted home her first of the year off of a looping cross from Katie Duong.

“We did well to clear it, but we didn’t take care of the weak side,” coach Michael Moynihan said. “They were able to capitalize off of it. We want that corner kick awareness to extend towards both sides of the ball.”

Minnesota spent the entire half pressing the ball, tiring out NU defenders. And the Cats didn’t have any answers.

“I think there were times when we were a little rattled today,” Moynihan said. “ We rushed ourselves when we didn’t really even need to. They were able to capitalize on that. It was kind of a mood that they created.

Regulation ended with both teams tied at one apiece. Play was far more even in the overtime period. Each side had a shot, and the Cats came away with two more corner kicks.

But in the 96th minute, Minnesota’s Sadie Harper found the back of the net on a left footed volley at the far post, ending the game in dramatic fashion and sealing NU’s second loss of the season.

“I think that’s just a matter of grit and desire. Sometimes things like that can just happen,” junior defender Hallie Pearson said. “It’s really difficult to defend and it’s not fun to see either. Some days, that’s how the goals are scored.”

— Women’s Soccer: Northwestern welcomes nine newcomers in a season like no other

— Women’s Soccer: Northwestern needs a source of offense if it wants to bounce back this season