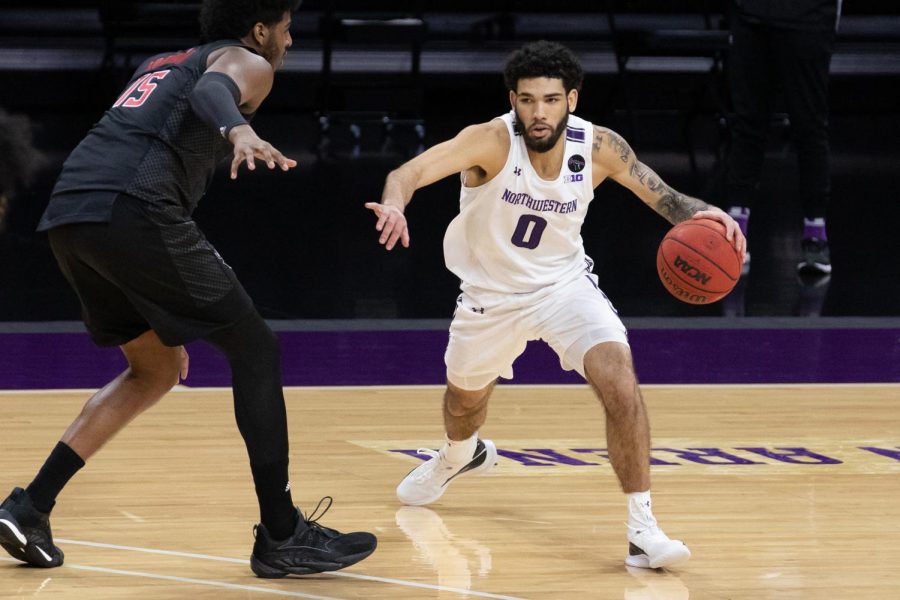 Sophomore guard Boo Buie drives against Rutgers. Buie led the Cats with 15 points and added a layup in the clutch as NU knocked off Maryland.

Ryan Young isn’t one of Northwestern’s top scorers. On Wednesday night, against Maryland, he wasn’t even in the starting lineup. But in the final minutes, Young was unquestionably the star.

With the Wildcats down 55-54 with just over 1:30 left, the sophomore center backed down his mismatched defender for the go-ahead bucket, hit a pair of free throws and corralled rebounds on three consecutive defensive possessions to key a game-ending NU 6-0 run.

“We felt like Ryan could be a weapon in this game just because of (Maryland) being undersized,” coach Chris Collins said. “Even though he didn’t score his presence opened up the three-point shooting in the first half and he was terrific down the stretch.”

Despite shooting just 36 percent from the field and finishing with 60 points, the Cats’ offense succeeded in dissecting the Maryland defense for important stretches. After the Terrapins raced out to a 9-0 lead and prevented any open looks for NU’s shooters, the Cats found their three-point shooting stroke with eight first half three-pointers.

“After the first four minutes, we settled into three-point shooting in the first half, that was really the equalizer,” Collins said. “We finally found some things where we could go inside and force double teams. We did a good job with our decision making and found shooters and made shots.”

NU’s shooting proficiency from deep overshadowed a rough night for junior forward Miller Kopp. He missed all eight of his three-point attempts and was 0-11 from the field.

The Cats switched tactics in the second half as their three-point shooting cooled off by attacking the post. After neither team attempted a free throw in the first half, NU picked up foul calls and made 10 of 11 free throw attempts.

Though the Cats made just two of their 10 three-point attempts in the second half, NU’s offense did just enough to stave off the Terrapins until the final minutes. With 4:50 remaining in the game, a three-pointer by Maryland’s Aaron Wiggins, who finished with a game-high 26 points on the night, gave the Terrapins their first lead of the half.

Collins responded to the challenge by doubling down with his frontcourt, playing both of his big men, Young and junior forward Pete Nance. Nance hit a go-ahead jumper to respond to Maryland’s run, then Young took control of the final two minutes.

“It was awesome,” Nance said. “Ryan works so hard on the court. He subbed in later in the game and was still locked in and made some huge plays down the stretch.”

After starting Big Ten play with three consecutive wins, the Cats will look to end the regular season the same way when they host Nebraska on Sunday.

“There’s such a small margin between winning and losing in this league,” Collins said. “But the emotions you feel from winning versus losing is probably the widest margin on earth.”