Wrestling: Coming off a loss against Minnesota, Northwestern gets set for Big Ten Tournament 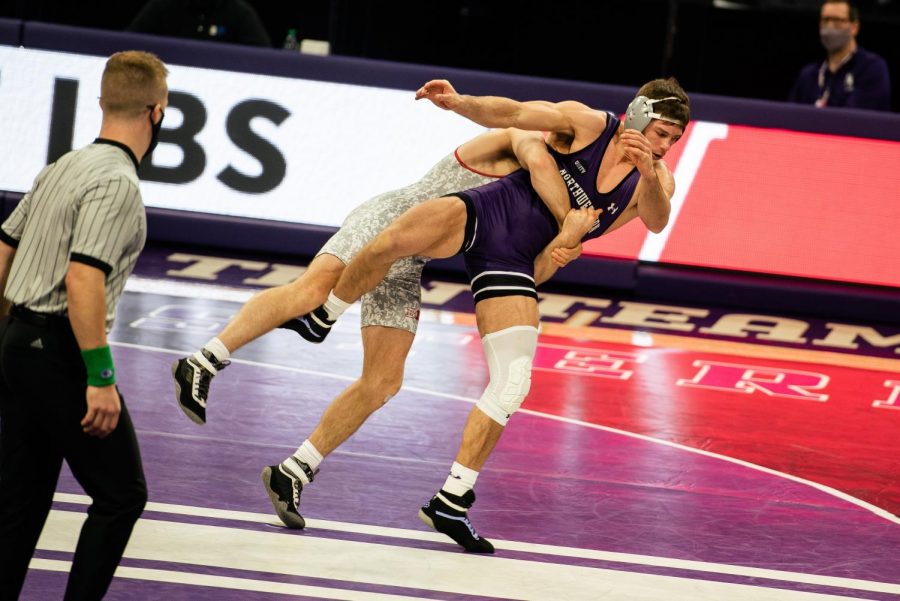 Ryan Deakin in a wrestling match against Wiconsin’s Garrett Model. Deakin is undefeated on the season, and is coming off a dominating performance against Minnesota’s Brayton Lee on his way to the Big Ten Tournament.

After a year disrupted by undisclosed injuries, Senior Ryan Deakin hasn’t been on the floor for long. Deakin’s matchup against No. 6 Brayton Lee in Northwestern’s (2-6, 2-6 Big Ten) last dual of the year against Minnesota (7-2, 7-2) marked only the third time all season he’s taken to the mat against a Big Ten opponent.

The bout was over before it really even started. The nation’s top ranked wrestler at 157, Deakin took a 6-0 lead out of the first period, one that saw all points scored in its last minute, two from a takedown with 20 seconds remaining and four more on a near fall right as the clock expired. He led 9-0 at the end of the second period and dominated a third period in which Lee barely had any time on attack.

“He goes out there against a top-six opponent and just manhandled the kid. Ryan was just on a different level,” coach Matt Storniolo said. “He’s seasoned, he doesn’t need to wrestle his way into a season. He’s ready at any time. It’s awesome to have him back, it’s a good jolt of energy for the team.”

Deakin won the Big Ten Tournament last season. Again, he showed why he’s the favorite while going up against Lee. Capitalizing off his forward pressure, riding Lee to the right and left, keeping the opponent’s hands on the mat and under his weight. When it was all over, Deakin led 12-0, securing a major decision and sending four points Northwestern’s way in the dual team score, giving the Cats an early lead over the Golden Gophers.

Now, he and the rest of the wrestling team are getting ready for the Big Ten Championships, set to be held this weekend in State College, Pa. Their workouts are now shorter and fewer, as coaches emphasize rest and recuperation in anticipation of post-season play.

“It’s about getting as much out of workouts as we can, not really trying to pack in more,” Storniolo said. “The idea this time of year is to deload a little bit with your workouts, get the guys feeling really good and fresh heading into the Big Ten Tournament.”

For junior No. 12 Yahya Thomas, some of those lessons are coming from the Minnesota dual. Thomas went up against unranked Michael Blockhus at 149, and lost in shocking 3-2 fashion. Blockhus wrestled conservatively, barely engaging. Storniolo said Thomas lost his focus in the fray, that he needs to create more opportunities in matches.

“Sometimes it’s not bad to take loss like that right before big competitions,” Storniolo said. “It motivates you, it recenters you.”

Storniolo said he expects the Big Ten Tournament to serve as a coming out party of sorts for freshman Chris Cannon. Against Minnesota, Cannon improved to 5-0 on the season, taking down Gophers’ Boo Dryden by fall in the second period of his bout. He’s been a star in his first season in the starting lineup, and has earned bonus points in four of five matches at 133 this season.

“He’s young, he’s a first year kid in the lineup,” Storniolo said. “He’s from a major high school program. He’s wrestled big competition all his life. This is the stuff he’s been waiting for.“

— Wrestling: Northwestern falls to No. 4 Penn State and Indiana in Tri-Dual

— Wrestling: On the mat for the first time in 314 days, Purdue steamrolls Northwestern