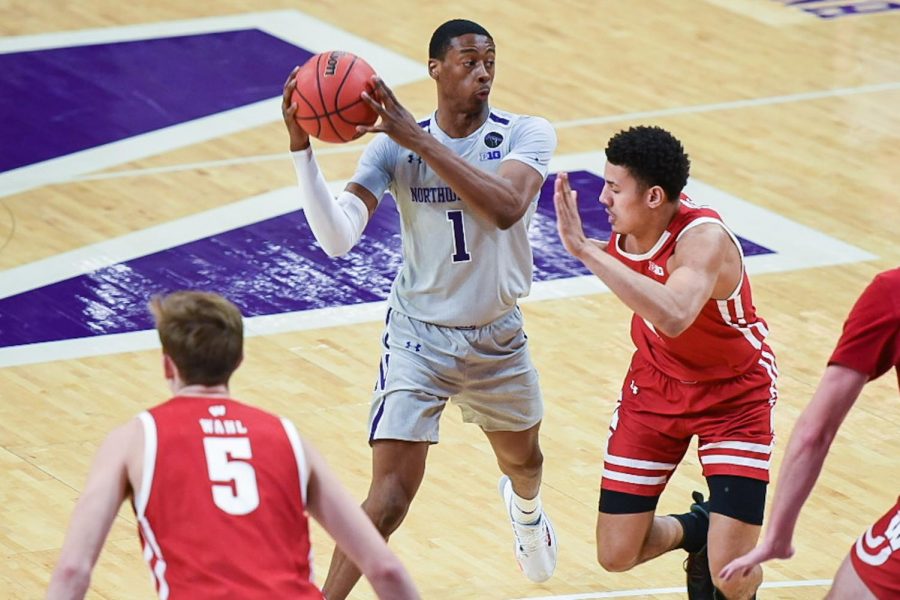 Maryland paid Northwestern a visit Wednesday evening, with the Wildcats in search of back-to-back wins for the first time since December 2020. NU entered the contest in a crowded race for tournament seeding among the Big Ten’s bottom four teams, jockeying for position with Minnesota, Penn State and Nebraska.

The Terrapins announced their arrival with an authoritative 9-0 run to open the ballgame, broken only by junior forward Pete Nance’s layup 4:41 into the first half. Nance’s bucket kicked off an 8-0 rebuttal from NU, as redshirt sophomore guard Chase Audige tallied five early points. The Cats trailed by just a point at the halfway mark of the first half despite junior forward and starter Miller Kopp missing his first five shots from the field.

Nance began to heat up, sinking a pair of three-pointers to put NU up 16-14 as Maryland was kept in its shell by six early turnovers. The Terps outshot the Cats 48 percent to 32 percent from the field in the first 20 minutes, but NU held serve and took a 28-26 lead into the intermission on the strength of eight three-pointers. Maryland guard Aaron Wiggins nailed three three-pointers of his own, and led both teams with 13 points in 17 first-half minutes.

The Cats continued to thrive behind the three-point arc to start the second half, with Audige’s jumper giving NU a 33-28 lead with 17:22 to play. Audige was slapped with half of a double technical shortly thereafter, but responded by draining a straight-on three, giving NU a 36-31 cushion and shushing the Terps’ bench as he ran back on defense.

After several minutes of both teams trading buckets, a Wiggins three moved Maryland within 43-40 with 10:38 on the clock. Terps guard Eric Ayala added another three less than a minute later, and Cats coach Chris Collins was forced to call timeout. NU regrouped and threw an effective counterpunch, scoring five straight points and forcing Maryland to call a timeout of its own.

The Terps turned again to Wiggins, whose three-pointer put Maryland up 51-50 with 4:50 on the clock. Nance responded with a jumper, but Wiggins drove to the hoop, scored and drew a foul. Sophomore guard Boo Buie re-tied the game at 54 with a layup with 2:59 to play.

After Terps guard Darryl Morsell hit a free throw to put Maryland back up by one, redshirt sophomore center Ryan Young powered to the basket and laid the ball in to give the Cats a 56-55 lead. Ayala’s go-ahead three-point attempt with :15 left was off, and Young pulled down the rebound and sank both free throws to close out the Cats’ second straight win.

In its streak-snapping win over Minnesota, NU hit just four threes, leading on its defense to put the clamps on the Golden Gophers. The Cats took a different approach against Maryland, bringing the fight to the Terps by hitting eight three-pointers in 19 tries in the first half. Buie’s three threes led the way, while Audige and Nance drained a pair apiece and freshman guard Ty Berry added one.

As Miller Kopp has gone in 2021, so has gone Northwestern. Kopp shot just 41.4 percent from the field in the Cats’ 13-game losing streak, which was bookended by a 56.3 percent output against Ohio State and a 50 percent night against Minnesota. Kopp found sledding rough against Maryland, failing to make a field goal in 11 tries, his most career attempts in a game without a make. Despite this, NU salvaged a win, just its second of the year in a game in which Kopp shot below 50 percent.

NU entered Wednesday mathematically alive for any of the Big Ten’s bottom four seeds, sporting a conference record of 4-13. Beating the Terps, however, brought some clarity to the picture. The Cats can now only be the conference’s No. 14 seed if Nebraska beats No. 5 Iowa in Iowa City Thursday evening and NU Sunday in Evanston.