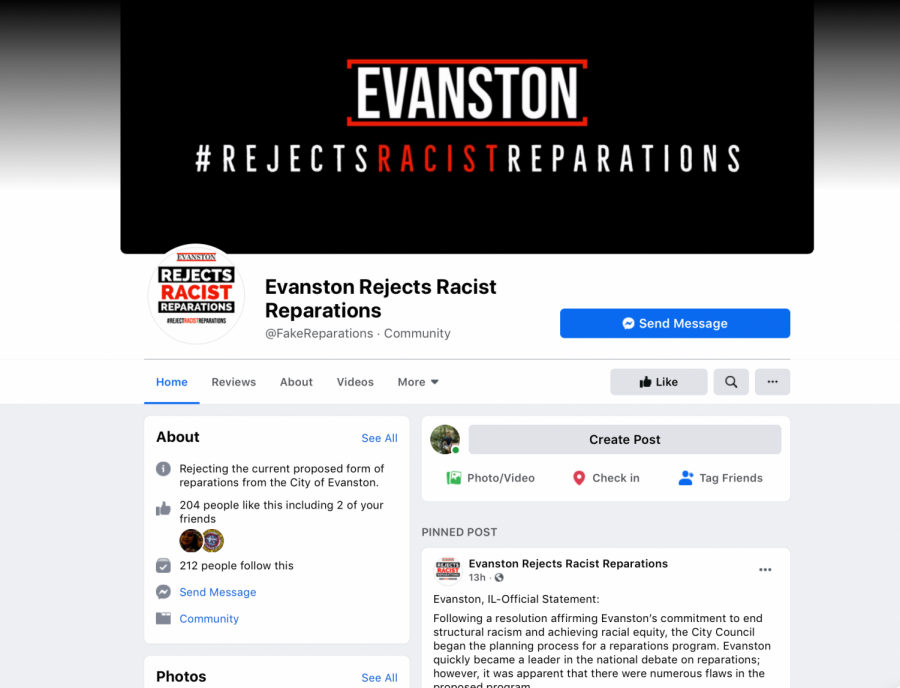 In a statement on their Facebook page Tuesday, Evanston Rejects Racist Reparations pressured City Council to either vote no on the reparations initiative, or wait until the new City Council takes office later this spring to hold a vote.

A group of residents has launched a campaign to pressure City Council from voting to approve distribution of the first $400,000 of the city’s reparations fund, characterizing the current reparations plan as “racist” and “fake.”

But the group, Evanston Rejects Racist Reparations, is now calling on Evanston residents to pressure City Council members to either vote against the initiative, or delay the vote until the new City Council takes office this spring.

The group says the program does not serve many Black community members. Former mayoral candidate Sebastian Nalls organized the group alongside residents such as Kevin Brown and Rose Cannon.

“Black voices are not being heard, and they believe that what is on the table are not real reparations,” Nalls said.

The group says providing reparations in the form of mortgage assistance would benefit banks, an institution that has “historically targeted black home buyers and financers.” The group also said the initial plan for reparations is not inclusive enough because its eligibility requirements are too stringent.

Only Black residents who suffered discrimination in housing as a result of City ordinance, policy or practice, or are direct descendents of a Black Evanston resident who lived in Evanston between 1919 to 1969 and suffered similar discrimination, are eligible to receive local reparations.

“ALL Black residents of Evanston have been exposed to racism and are owed repair, but creators of the program say the limited impact of the current proposal is because of the size of the fund,” the group said in a statement Tuesday.

The group’s Facebook page, which can be found at the handle @fakereparations, has amassed over 200 likes since its creation Sunday.

“We have come together as residents to fight against fake reparations,” the statement said. “We reject racist reparations and demand a better, more responsive, more complete program that provides access to reparations acts of actual repair to Black folks.”

Rev Dr. Michael Nabors, the President of the Evanston NAACP and the senior pastor at Second Baptist Church of Evanston, is helping establish the Reparations Stakeholders Authority of Evanston, a group of Black community leaders that will work with the city to recommend uses of the reparations funds.

Nabors, who worked closely with Rue Simmons to shape the reparations program, said housing was identified in 2019 community meetings as the priority of Evanston’s reparations initiative. The legal case for the fund in Evanston also has roots in a history of discriminatory city housing policies, as opposed to the federal reparations bill H.R.-40 which centers around reparations for slavery.

“If you look at the wording of (the 2019 reparations) resolution, we are obliged to respond to what that wording is and that wording very specifically places housing at the top of the list,” Nabors said.

Nabors said he also questioned whether the actions of the group “serve to divide” the community on an already delicate initiative.

He also said he wished the members group had spoken to him and the other members of the Reparations Stakeholders Authority privately before creating a public Facebook page.

“I would rather not do anything in public that would serve as a division,” Nabors said. “I would rather try to do everything we could to preserve a united front.”

While Nalls said his group represents the opinions of many Black residents in Evanston, Nabors said it would be “ludicrous” to say the group represented the predominant opinion of the Black community.

“I represent a congregation that has 900 members and I would also feel very comfortable speaking on behalf of them, saying that they also are fully supportive of the effort of the stakeholders in the reparations movement so far,” Nabors said.

One of the principal organizers of the group, Cannon, is a member of Nabor’s ministerial staff and serves as an unordained minister for the church.

“He cannot speak for me,” Cannon said. “He thinks he has authority over this church. I don’t know what the other members think — I do know what one or two of them think — and no, Nabors does not speak for us.”