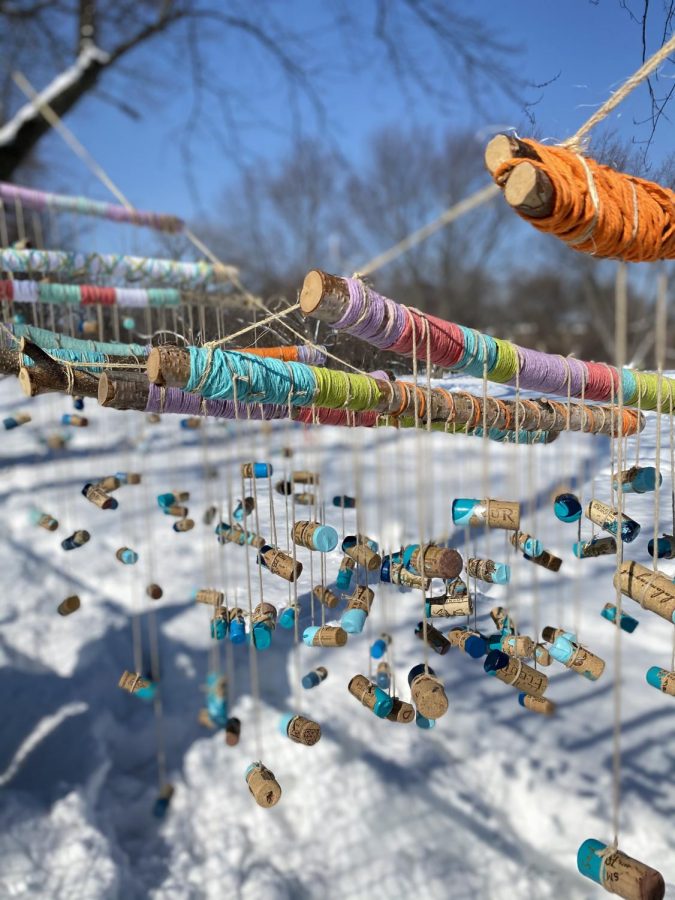 The “Bridge Over Troubled Water” art piece. The piece was created by a group of Evanston youth who call themselves “Camp Quarantine.”

The Canal Shores Golf Course has a new sight on display: the art piece entitled “Bridge Over Troubled Water,” designed by a group of Evanston youth.

“Camp Quarantine,” as the group calls themselves, is a group of seven children aged 9-12 who bonded over quarantine by making different arts and crafts. The art piece, part of Evanston Made’s Winter Wonderland event, consists of pieces of birchwood wrapped in yarn to represent a bridge, and blue corks dangling from the birchwood to represent the water in “Bridge Over Troubled Water”.

“(This project) was a really nice way for them to get to know each other better and do a lot of artistic crafts,” said local artist Amy Harms, who is a member of Evanston Made and the coordinator of the project. “It was a good way for them to think about how they had bonded over the last year and express that through a group art project.”

Harms said the children were “really excited” to do the project. On each of the corks, they inscribed words representing emotions they have felt throughout the past year. Harms said the bridge represents the friendship that helped the children get through the “troubled times.”

Camp Q member Tatum said her favorite part of the project was wrapping the birchwood in yarn because of its calming nature. She said she was particularly proud of the pattern she created on one of the sticks.

Tatum, 12, wrote the words “panicked,” “annoyed” and “calm” on the corks, which she said represented different periods of quarantine. For example, Tatum said there was a month early on in the pandemic where she enjoyed being able to sit inside all day, before she realized the full extent of the pandemic’s impact.

“It was nice to get it off my mind and put it down on a cork,” she said. “It was cool to see our art come together.”

Tatum’s friend Ryder, 12, also agreed it “felt good” to get his feelings out onto the corks. Some of the words he wrote were “brave,” “happy,” “sad” and “overwhelmed,” all feelings he felt throughout the past year.

Ryder said despite the negative feelings, it was a fun project to do with his friends, and he enjoyed seeing the final product.

“It looked really good… it was not something I was expecting because it was really well put-together,” Ryder said.

Lisa Geraldson, who has two children in Camp Q, said the group has provided a safe space for the children during the uncertainty brought by the pandemic.

She said although one of her children is more arts-oriented than the other, they both embraced the project and enjoyed spending time with their friends.

“The kids found each other to be a safe haven — they love being together,” Geraldson said. “(This project) gave them something outside of the ordinary… it’s not only wrapping the sticks in yarn, but it’s understanding what it means and relaying in words what they feel.”

In the future, Harms said the group plans on rotating the art piece around to different places in Evanston, including the library and their own homes.

Ultimately, she said she hopes people who see the installation understand the broader meaning behind the piece.

“I hope that they can see how kids from many different ages and backgrounds can bond, even over a pandemic, and find ways to express themselves,” Harms said. “I want to show to the community that even in the worst of times, art can heal.”

— Evanston Made, Canal Shores embrace the cold with a nature art treasure hunt