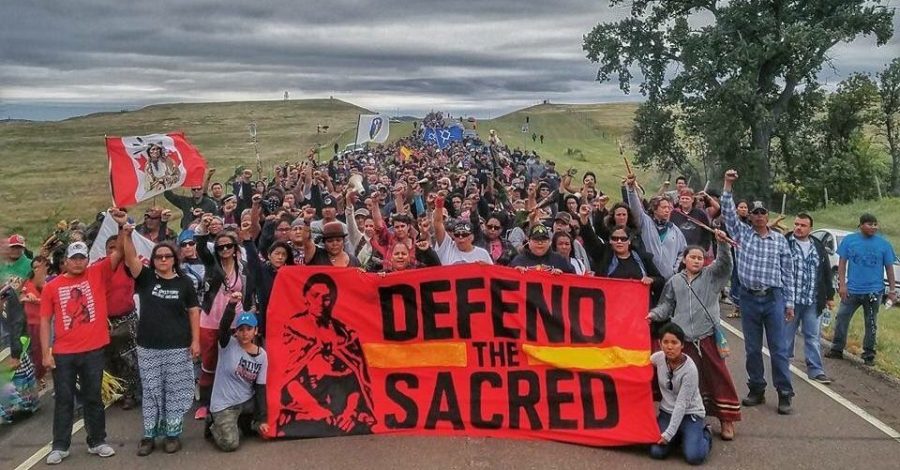 Indigenous rights groups and tribal governments say the Dakota Access Pipeline is illegally operating, threatening Indigenous sovereignty and increasing the risk of pollution. DAPL’s future is uncertain as they wait for the Army Corps of Engineers to release an environmental review, but the Illinois Commerce Commission has approved a project to double the pipeline’s capacity.

Illinois Indigenous rights activists, tribal governments and environmentalist groups are joining a national call for the Biden administration to shut down the Dakota Access Pipeline after the Illinois Commerce Commission approved a project to double its capacity last October.

The pipeline currently transports 570,000 barrels of hydrofracked oil per day from the Bakken region of North Dakota to Patoka, Illinois, where it is then often shipped to oil refineries in Illinois and the Gulf Coast. In October 2020, the commission agreed to allow Energy Transfer Partners, the corporation that controls the pipeline, to add pumping stations and equipment that could transport up to 1.1 million barrels of oil per day.

Indigenous rights groups have opposed the pipeline since it was proposed in 2014 because it crosses under Lake Oahe, a reservoir of the Missouri River just north of the Standing Rock Sioux Nation. If it leaked, the pipeline would pollute water supplies, fisheries and sacred sites for the Standing Rock, Cheyenne River, Oglala Lakota and Yankton Sioux Tribes.

However, the Trump administration allowed ETP to construct the pipeline without a full environmental review from the Army Corps of Engineers in January 2017, and oil began flowing through it in June 2017.

“For four years we’ve been living every day in a state of suspense, not knowing when the pipeline is going to burst,” Chase Iron Eyes, lead counsel for the Lakota People’s Law Project, said.

Iron Eyes said tribal organizations and governments continued pressuring courts to subject the pipeline to a full environmental review after oil began flowing in 2017. They received a victory in March 2020 when a federal judge ordered the Corps to conduct one. In the meantime, the judge vacated the pipeline’s right to pass beneath Lake Oahe.

Indigenous groups said the pipeline is operating illegally because of the judge’s decision. But for now, oil continues to flow.

On Jan. 19, leaders of the Standing Rock, Cheyenne River, Oglala and Yankton Sioux Tribes sent a letter to President Biden requesting he stop the pipeline from operating until the environmental review is complete.

“It is beyond time for the United States to fulfill the promises that it made in the Treaties and stop the illegal trespass of our lands and waters,” the letter said.

Environmental groups also oppose the pipeline and its expansion.

Richard Stuckey, a board member of Save Our Illinois Land and member of the Sierra Club, said adding pumping stations to the pipeline creates more high-pressure regions vulnerable to spills. He also said he is concerned about the climate impacts of continuing to burn fossil fuels.

Tara Houska, founder of Giniw Collective, a Minnesota-based Indigenous and environmental justice organization, said climate change mitigation is incompatible with pipeline projects. She said if just the oil that’s already been extracted were burned, the global average temperature would exceed the 1.5 degree Celsius goal set by the Paris Climate Agreement.

“These projects are extensions of cultural genocide… (and) industry that continues to grow despite the climate crisis,” Houska said.

On their website, ETP says they have “a comprehensive pipeline integrity program that enables (them) to monitor… assets 24 hours a day, 7 days a week,” ensuring their pipelines “operate safely and responsibly.”

However, John Albers, an attorney who represents SOIL, the Sierra Club and a landowner who opposed pipeline expansion, said under the current leakage detection system — which cannot detect leaks amounting to one percent or less of the pipeline’s flow rate — the pipeline “could leak 237 barrels of oil in an hour and (ETP) wouldn’t know.”

Albers said if the pipeline’s capacity doubles, the quantity of those potential undetected leaks could double as well.

The pipeline is operated by Sunoco LP, which, according to a Reuters analysis, “spills crude (oil) more often than any of its competitors.”

On top of environmental concerns, Indigenous activists say the pipeline threatens sovereignty over their land and culture.

Al Eastman, an ecologist and member of the Rosebud Sioux Tribe, said even small oil leaks have long-lasting consequences for human health, ecosystems and reservations’ tourism economies, which rely on cultural sites and fisheries.

Eastman said sacred and cultural sites were destroyed by ETP during the pipeline’s construction, and peaceful Indigenous protesters were met with a militarized police as well as private security forces and dogs, leading to hundreds of arrests. He added that brutal police responses to Indigenous protesters are rooted in White supremacy.

“It’s just an extension of Manifest Destiny… of taking without asking,” he said.

However, some unions support the pipeline’s expansion in Illinois, saying it would help working people and be safer than building a completely new pipeline.

Harris said he supports Indigenous sovereignty, but believes the pipeline can be operated in a way that eliminates the risk of leaks and creates jobs for Indigenous workers.

But many Indigenous leaders said they did not consent to pipeline construction in the first place, and the threat of climate change necessitates immediately shutting down fossil fuel projects.

“Extractive economy has been the only option that we’ve been offered for many decades,” Houska, who was raised in rural Minnesota, said. “The promises of jobs are extremely temporary in nature… It’s just more shortsighted justifications and excuses that can impact our ability to survive.”

For now, Indigenous activists and environmentalists said they are waiting to see if the Biden administration will stop oil from flowing through the pipeline while the Corps finishes its environmental review, a process likely to end in late 2021. Albers said he is working on an appeal to the ICC’s October decision to allow the doubling of the pipeline.

Some activists feel optimistic, given the Biden administration’s recent decision to revoke the Keystone XL Pipeline’s permit, but others are skeptical that the administration will take decisive action. Activists said they plan to engage in intense grassroots pressure to bring about a similar decision for the Dakota Access Pipeline.

“There’s no amount of money that you could pay us to have us agree to put our water at risk,” Iron Eyes said. “So we’ve got to rely on people waking up and feeling… urgency that the climate (is) collapsing.”