Local arts collective aims to bring community together through performances 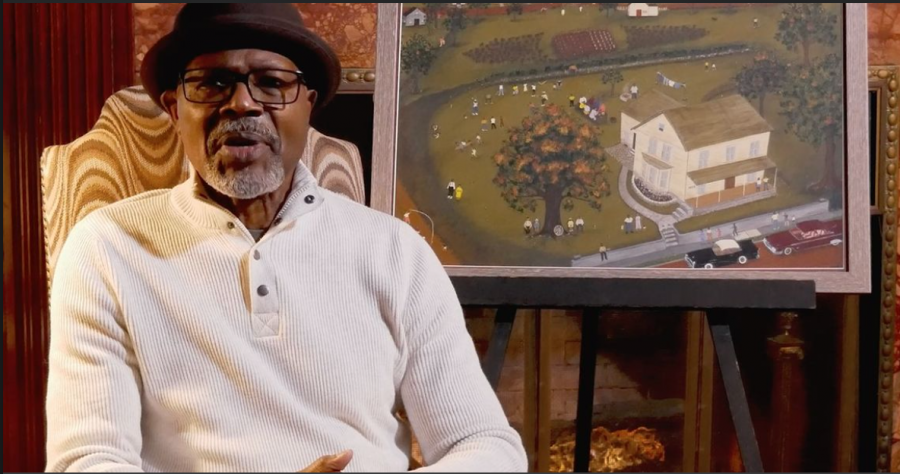 Jevoid Simmons sits against a backdrop showcasing one of his paintings as he recites an excerpt from his book, “Up from Down Home: A Family’s Journey North.” This installation was the second in EPAC’s digital installation series.

The Evanston Performing Arts Collective is the latest arts initiative to rethink how local groups can continue to share stories in a pandemic. The collective moved their work online to bring joy to the Evanston community.

“We’re storytellers; we have to tell stories,” said John Frank, co-founder and artistic director of Evanston 2nd Act Players, a group in the collective. “If we can’t do it in public we’ll do it online.”

At least 11 organizations, including 2nd Act Players and the Fleetwood-Jourdain Theatre, united to form EPAC. The collective unveiled their second installation on Monday, in the four-part series “Celebrating Life, Community and the Arts.”

Fleetwood-Jourdain Theatre Artistic Director Tim Rhoze was one of the driving forces that brought EPAC together. Rhoze hoped that working with EPAC would allow collaborators to center local performing arts in the community at a time residents are filled with so much separation and sadness.

“We want to give back to the community so that they can somehow put the pandemic away, and just have something to look at and be joyful about,” Rhoze said.

Monday’s installation featured storyteller Jevoid Simmons sharing an excerpt of his recent exhibit, “Up from Down Home: A Family’s Journey North.” The narrative portion of the exhibit recounts the true story of Simmons’ family traveling north to avoid discrimination in the Jim Crow South. It featured animated puppetry by Michael Montenegro and an original score by Rick Ferguson.

EPAC launched its first virtual installation, a rendition of “The New World” from the musical “Songs from a New World” with dance accompaniment, on Jan. 1.

Rhoze’s daughter, dancer and choreographer Kara Roseborough, who worked on the first installation, said bringing a sense of community to the arts is especially important in a time when everyone is isolated.

“I think that the Performing Arts Collective would have come to fruition regardless, but I think that its impact and significance is felt even more so now because of the pandemic,” Roseborough said. “It really is an act of resilience in that way.”

One of Rhoze’s main goals has been to ensure that EPAC is an organization that serves all of Evanston, especially audience members who have typically been overlooked. To reach this goal, EPAC has been releasing their performances for free through Facebook and Youtube, featuring sign language interpretation in each performance and highlighting Black artists, storytellers and performers.

“Inclusion doesn’t have to be a label, it just has to be a reality.” Rhoze said. “We’re always continuously trying to find ways to expand our outreach into everyone who exists in our community.”

The collective plans to hold another performance on either May 1 or July 1, and possibly unveil an outdoor festival celebrating the arts in Evanston in the fall, Rhoze said.

Although EPAC was created to share art during the pandemic, Frank said he hopes the collective will continue its efforts to bolster the Evanston arts scene even after patrons are allowed in theaters again.

“Evanston’s an artsy place,” Frank said. “In the past, [theaters] all worked on their own, and I think that diminished the impact they had on the local community. Hopefully through EPAC people will start understanding that we’re all here.”