Women’s Soccer: Northwestern women’s soccer gets a shutout in win over Maryland 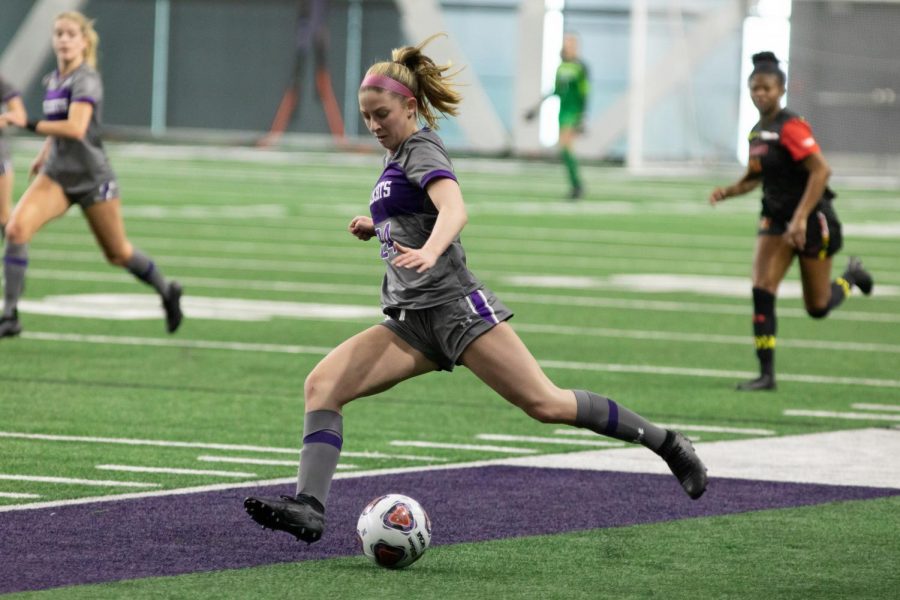 Freshman forward Ella Hase dribbles the ball up the field.

“Having the loudest bench has always been one of our top goals,” Austin said. “They give us energy on the field and it really helps us keep playing when we’re in tough situations.”

The opening minutes of the game went back and forth as the Cats and the Terrapins struggled to break through each other’s defense.

“Danika has really emerged as a great leader for us in the defensive part,” coach Michael Moynihan said. “She makes great decisions. She’s tough as nails.”

As the first half began to wind down, NU grew aggressive on the offensive side of the field, outshooting the Terps 15-to-7. But they couldn’t put anything past Maryland redshirt freshman goalkeeper Kennedy Tolson. The Cats simply outmaneuvered Maryland, shutting the Terrapins down whenever they got past the fifty yard line.

After their season opener, Moynihan said the senior leadership would “pay dividends” for the Cats’ campaign. And it did in Sunday’s game.

“I thought we pressured (Maryland) well today and came out aggressive in our approach which is something we didn’t do against Penn State,” Moynihan said.

Junior forward Olivia Stone led NU’s attack with two shots in the first half. She scored the Cats’ lone goal in the second half off of an assist from freshman midfielder Josie Aulicino.

“(Our team) really stresses getting the ball in our feet in the high gap and trying to hold the ball,” Stone said. “We did a pretty job today building triangles around their midfield.”

The Cats continued to apply the pressure in the second half, forcing the Terps into turnovers and fouls. Offensively, the team totaled six corner kick attempts and kept the ball in front of the Terps’ goal for the majority of the game.

One of the biggest changes this season has been the absence of fans due to COVID-19, but the Wildcats have adjusted with their high energy and cheerful attitude. They’ve been their own cheerleaders, which senior midfielder Kylie Fisher said was a key goal heading into the season.

After a three game stint at Ryan Fieldhouse, the Cats hit the road to start their three away game series against Minnesota.

“I really think the win today shows that we’ve got a lot to prove and a lot to continue to work on in order to beat these top teams in the Big Ten,” Austin said.