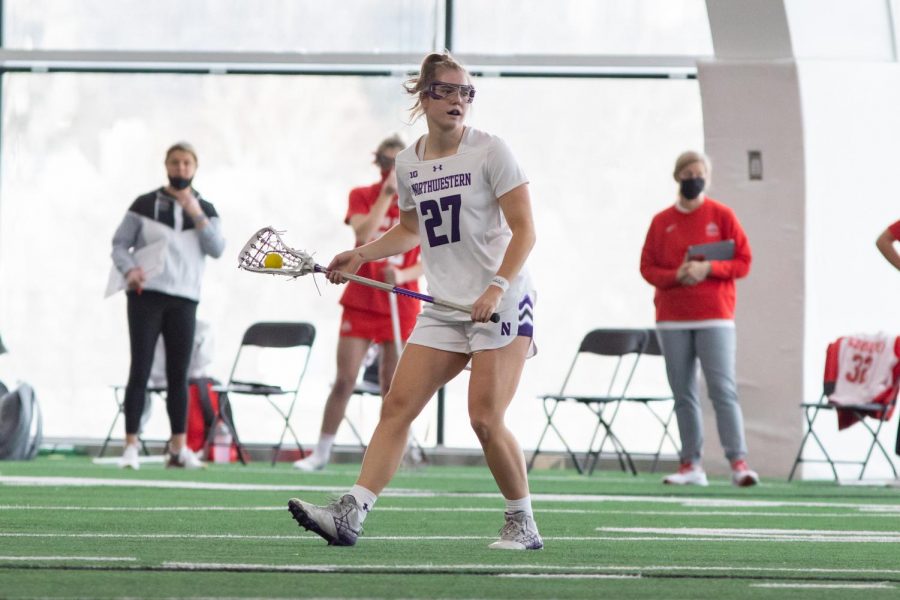 Hitting the road in over a year, Northwestern lacrosse extended their four-year-long winning streak against John Hopkins this weekend.

The Wildcats put on an offensive clinic in both games, defeating Johns Hopkins 17-8 on Friday and 18-9 on Sunday at Homewood Field in Baltimore.

NU scored 12 unanswered goals on Friday during a nearly 30 minute span. The team also dominated on Sunday, with junior attacker Izzy Scane leading with seven goals. Scane’s goal total was just shy of the career-high nine she notched during the Cats’ season opener against Ohio State.

The Cats never trailed on Sunday, and at one point led the Blue Jays by ten goals. Things were different Friday, when the Blue Jays jumped out to a 3-0 lead just four minutes into the game and led 6-3 halfway through the first.

Coach Kelly Amonte Hiller said she was happy with the team’s focus and the momentum shift from Friday to Sunday, especially given the rainy, cold conditions at Homewood Field during their second matchup.

“I was pleased with how they stayed calm and got right back into it,” Amonte Hiller said. “We wanted to have a better start and we were able to do that.”

While Friday’s game started off slower, it featured an explosive 12-0 Northwestern run spanning nearly 30 minutes. Scane broke through for her first goal of the day with about 13 minutes left in the first half, kickstarting the offense. The run was a team effort, with eight different players scoring to put NU up 15-6 with 18 minutes left in the game.

Scane said the team focused on staying calm and playing how they normally would, no matter the score.

“I was really proud of how the team handled it, and we did a good job of just playing our own game and not getting in our heads,” Scane said.

The Cats commanded the draw during both games, winning 20 to the Blue Jays’ 7 on Friday and 21 to the Blue Jays’ 8 on Sunday. Amonte Hiller credited senior midfielder Brennan Dwyer’s Friday performance and Dwyer and senior attacker Lauren Gilbert’s draws on Sunday as playing big roles in NU’s victories.

Dwyer won 10 draws on Friday, half of all of NU’s draw controls. She and Gilbert combined for 17 out of the Cats’ 21 draws on Sunday. Dwyer said the Cats’ strong play off the circle ultimately led to more offensive opportunities.

The Cats’ trip to Baltimore marks the team’s first road trip in over a year. Scane said she and the team enjoyed the opportunity to get out of the regular routine of the past year, which has mostly consisted of practice either at their homes or at school.

“All of us are very excited to be out and about and traveling and (back to) some sort of normal life,” Scane said.

The Cats are set to return to play against Penn State at Ryan Fieldhouse on Friday. Amonte Hiller said she wants to work with players who have not received as much playing time ahead of the game.

“I think it was really good to have two games in one weekend, (to) kind of see how we can improve,” Amonte Hiller said.