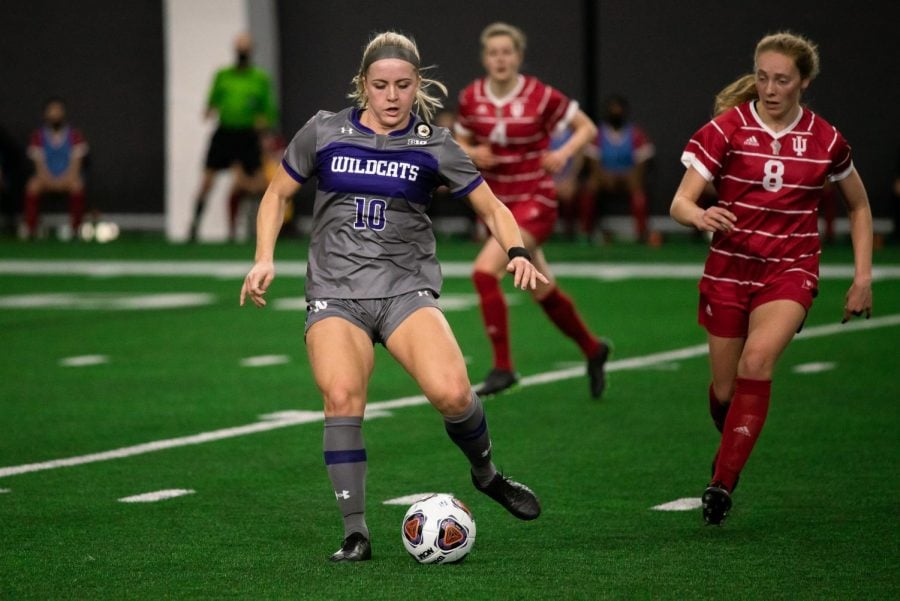 Junior forward Olivia Stone with the ball Saturday against Indiana. Her 74th minute shot was one of few the Cats recorded in the second half against Penn State.

Though Northwestern had been outplayed during the first half, it managed to tie with Big Ten favorite Penn State 45 minutes in, thanks to a brilliant equalizing goal by freshman midfielder Josie Aulicino.

After the break, however, it could not keep up.

The Nittany Lions (1-1) netted three goals in the second half for a 4-1 victory in Ryan Fieldhouse, getting in the win column for the first time in 2021 and handing the Wildcats (1-1) their first defeat.

“Their center backs were penetrating on the dribble, and that was causing us problems,” coach Michael Moynihan said. “We just felt like we were chasing.”

The tide turned firmly in Penn State’s favor in the 59th minute, when NU senior forward Nia Harris committed a foul in the penalty box. Nittany Lions star Sam Coffey, who was selected 12th overall in last month’s NWSL Draft, calmly put the ensuing penalty shot past junior goalkeeper Mackenzie Wood, and Penn State had the lead it would not relinquish.

Even still, the Nittany Lions looked most comfortable. And they’d continue to pour it on. Five minutes after converting the penalty, Coffey played a beautiful ball on a corner kick to Ally Schlegel, who headed it into the net to double Penn State’s lead. The Cats allowed a fourth goal in the 79th minute when Schlegel was in front of the net to put home the rebound after an impressive stop by Wood for her second of the game.

“The penalty kick, just a little bit more discipline defending and that doesn’t happen,” Moynihan said. “The corner kick, we could have defended better.”

Penn State was clearly the better team from the outset, controlling much of the possession early on and putting the pressure on NU’s back line. Wood had to make a big save in the ninth minute on a shot from Payton Linnehan, but in the 17th minute, the Nittany Lions found the opening goal. Schlegel sent a pass from the baseline to a streaking Kristin Schnurr, who slotted a one-timer past Wood.

After not finding much offense for the first half hour, the Cats came up with a strike to tie things up in the 40th minute. Aulicino released a right-footed shot at least 25 yards away from the net, and the ball curled beautifully to the left, out of the reach of Penn State goalkeeper Katherine Asman.

“They were buzzing about it at halftime,” Moynihan said. “You don’t see goals like that too often, so for a first-year, she shows unbelievable promise and potential. Hopefully it gives her some confidence.”

NU had chances to cut into its deficit down 3-1 in the second half. Sophomore defender Marianna Annest, who assisted on Aulicino’s goal, helped create some offensive momentum. Junior forward Olivia Stone managed a shot on goal in the 74th minute, but the Cats couldn’t put another ball past Asman.

“4-1 is not reflective of the game,” Moynihan said. “It’s unfortunate, it’s a little bit embarrassing. They’re a good team, but it’s still an embarrassing scoreline. Unfortunate as the scoreline was, I thought it was a step in the right direction.”

— Women’s Soccer: Northwestern welcomes nine newcomers in a season like no other

— Women’s Soccer: Northwestern needs a source of offense if it wants to bounce back this season