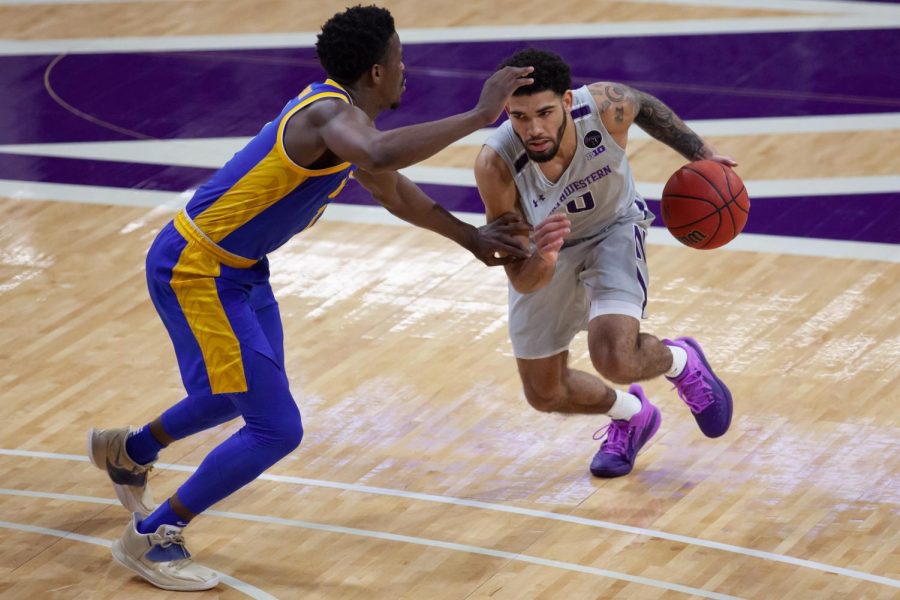 Boo Buie drives to the basket. Buie’s 25 points led Northwestern past Minnesota for its first win since December 26, 2020 at Ohio State.

Northwestern came into Minneapolis from the wilderness, losers of 13 in a row and a basketball team seemingly void of form. But Minnesota, despite the Wildcats’ efforts to ensure otherwise, gave NU much-needed shelter from the Big Ten storm.

The Cats relegated their 61-day winless run to the history books Thursday night with a 67-59 victory over the shorthanded Golden Gophers, keyed by 25 points and three three-pointers from sophomore guard Boo Buie. NU pulled out the win after trailing by 14 early in the first half and 31-25 at halftime, while repeatedly shooting itself in the foot to the tune of 19 turnovers, its highest total since December 15, 2020 against Quincy.

“I’m just really happy for our guys tonight,” coach Chris Collins said. “It’s been a tough go in terms of finding ways to win… if you find a way to win in this league, you’ve gotta be proud of yourself.”

With 12:07 left in the first half, the Cats had their work cut out for them, as Minnesota guard Marcus Carr drained a pair of free throws to give the Gophers a 17-3 advantage — even as they played without a pair of key pieces in center Liam Robbins and guard Gabe Kalscheur. A three-pointer from sophomore forward Robbie Beran was NU’s lone field goal at that moment, and the Cats had amassed eight turnovers in eight minutes of play.

Gradually, however, NU battled back, tying the game 19-19 and later trailing by six at the intermission despite turning the ball over 12 times in the first 20 minutes.The Cats held Carr, one of the most productive offensive players in the Big Ten, to seven points in the first half and he made just one of six shot attempts.

“I was really proud of our defense on Marcus Carr,” Collins said. “Our guys really bought into the game plan. I’ve seen that guy score 30, 35, 40 points too many times and single-handedly win games. We were gonna try to not let that happen, and test some of those other guys.”

NU further clamped down in the second half, limiting Minnesota to 33.3 percent shooting while its offensive weapons delivered the shots needed to put the Gophers away. After a Carr three-pointer put Minnesota up 49-48 with 4:55 to go, junior forward Miller Kopp responded with five straight points. When Gophers forward Eric Curry brought his team back within two with a layup at 2:52 left in play, sophomore guard Chase Audige came back with a deft tip-in of a Buie miss, and Buie hit a three-pointer to all but seal it at 58-51.

“When we got the lead, we continued to execute well down the stretch,” Collins said. “In the last two minutes we didn’t turn it over when (Minnesota was) pressing and trapping. We kept our poise.”

Carr hit three-pointers with :44 and :20 on the clock to shave the Cats’ leads to two possessions, but the Gophers would draw no closer, and two foul shots from Buie provided a fitting coda to his highest-scoring night— and NU’s first win —since December 2020.

“You walk into the locker room and you see celebration, you see smiles,” Collins said. “These guys are putting a lot into this thing. I’m really proud of them, and they deserved it tonight.”