Women’s Basketball: Northwestern swept Illinois with a scoring comeback in the second quarter 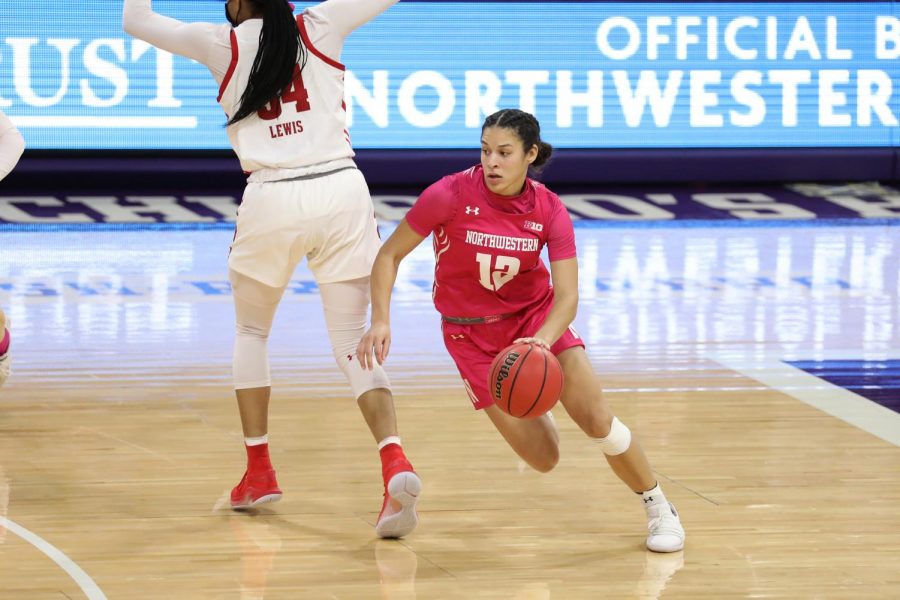 Veronica Burton dribbles the ball Feb. 20 against Wisconsin. Today against Illinois, her four free throw points in the first quarter helped Northwestern stay in a game that looked like it was slipping away.

It was a rivalry night Wednesday as the Wildcats squared off against Illinois in the penultimate Big Ten away showdown of the season. Northwestern (13-5, 11-5 Big Ten) completed a season sweep of the Fighting Illini with a solid 67-61 win.

The win was their 12th straight against Illinois (3-16, 1-15 Big Ten), but the Cats struggled in the game’s opening minutes.

NU struggled with its shooting early on, going four minutes without scoring in the first quarter. The final numbers from the quarter were abysmal, from inside the paint and beyond the arc — the team shot 2-for-15 and 0-for-6 in the first quarter respectively.

The Cats first four points came off the free throw line from junior guard Veronica Burton. For a team that’s averaging 70.9 points per game, their problems offensively were out of the ordinary.

“We got off to a really slow start tonight,” said coach Joe McKeown. “We’ve been the opposite (normally) where we’ve started really strong.”

By contrast, the Fighting Illini were excelling offensively. Illinois shot 75 percent behind the arc in the first quarter, giving them a ten point lead over the Wildcats by the start of the second.

But the Cats stormed back in the second quarter with a run of their own. NU pushed the fast transition on offense, shortening Illinois’ lead to three with over seven minutes left in the first half.

Freshmen forward Paige Mott came up big with critical back to back layups in the post to drive NU’s offensive run. Her dominant presence inside the paint was assuring when the team struggled from field goal range in the first ten minutes. She racked up eight points Wednesday night.

For the rest of the game, the Wildcats were unstoppable on offense. Senior guard Jordan Hamilton hit a smooth jumper and redshirt junior guard Lauryn Satterwhite put away an effortless three pointer to put NU in the lead.

“I loved how we played in the second quarter,” McKeown said. “We held them to three points and got our offense together and were able to turn (Illinois) over.”

NU started the second half energized and aggressive with an early steal from Mott to create a fast break scoring opportunity for junior guard Sydney Wood. The rest of the team continued their offensive ascendance, including senior guard Lindsey Pulliam who made two of her signature jumpers.

The Cats’ dominated the entire third quarter transforming the game into a shooting clinic against Illinois. They moved the ball around the arc looking for the inside opportunity or used screens to drive up to the net. Pulliam was on fire in the third shooting one hundred percent from behind the arc.

With just ten minutes remaining, NU held a comfortable lead over Illinois showing no signs of slowing down offensively. Defensively, they forced 29 turnovers, stealing the ball fourteen times from the Illini. Burton and Pulliam ended the night with 20 and 19 points respectively.

NU’s solid team win was a statement as the team looks for a fourth place seed into the Big Ten Conference in Indianapolis March 9-13. The Cats will be back at home at Welsh-Ryan Arena Sunday against Maryland.

“The biggest thing we got to do is do what we did against Iowa and Ohio St when we controlled the pace and remained balanced offensively,” McKeown said. “We played a great game at Maryland last year so (I’m) really excited about Sunday.”

—Women’s Basketball: Northwestern’s high pressure defense made a strong comeback in the win over Wisconsin