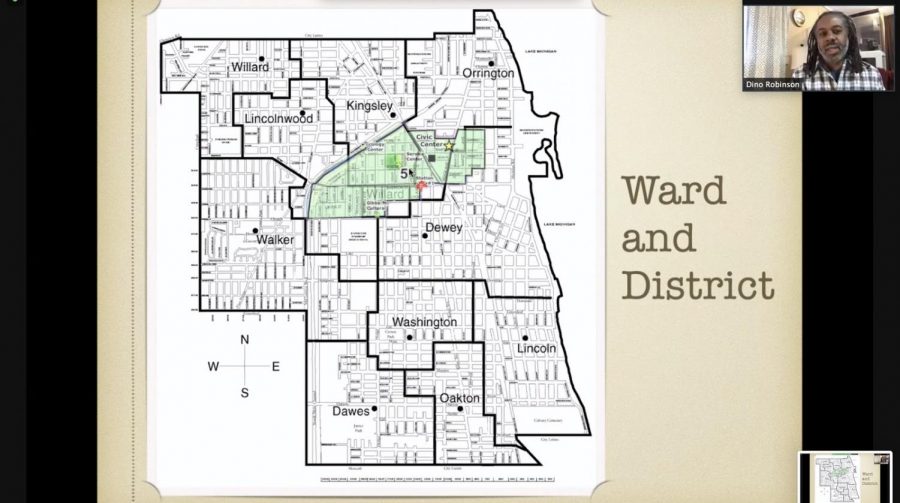 Dino Robinson speaks at Wednesday’s workshop. He discussed the history of the Foster School, a school in Evanston’s 5th Ward.

Though the committee usually focuses on providing clothing to students in need, Evanston residents shared updates on Wednesday about the longtime movement to open a 5th Ward school.

The Foster School used to serve the area that would be the 5th Ward until the 1970s, when the school closed due to Evanston/Skokie School District 65’s desegregation plan, according to local Black historian Dino Robinson.

Once the Foster School closed, Robinson said the 5th ward was divided into sections and kids were bussed to different schools, which “doesn’t develop a cohesive neighborhood.”

“A lot of people have the misconception that STEM just means we’re going to put some stuff in your hands, we’re going to do science and math,” Bell said. “There is a lot of hands on (work), (but) the big difference between STEM and a traditional school is the mindset that the kids have a voice and a choice.”

Since Marshall switched to STEM education, Bell said he has seen a change in mindset that has translated to improved academic performance.

Henry Wilkins, who has led the three-year-old initiative STEM School Evanston, said the school should not only be open to all students in Evanston’s Central Core, which encompasses the area between Northshore Channel, Greenbay Rd., and Church St., but also act as a magnet to students from across the city.

Currently, his organization is focused on raising awareness about the need for such a school, reaching out to community leaders for partnership and advocating for building without increasing residents’ taxes or having to close an existing school.

When asked about recent news that District 65 has interest in opening a school in the 5th Ward, Wilkins said he has been in conversation with Superintendent Devon Horton and hopes to work together to further the initiative.

“We’re not conflicting in any way,” Wilkins said. “It’s almost like two trains going down a track, and we’re eventually going to merge.”

— Evanston’s 5th Ward may get its own elementary school