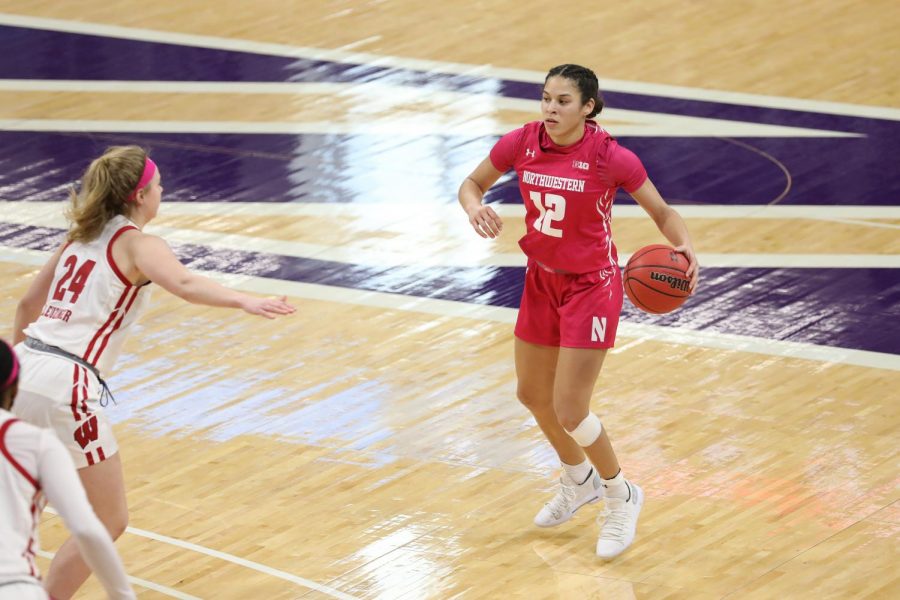 Veronica Burton dribbles the ball. The junior scored 20 points against Illinois on Wednesday.

The first 10 minutes of play on Wednesday against Illinois were nothing short of a disaster for Northwestern.

The Wildcats scored just 9 points in the first quarter, and went over eight minutes without making a single field goal. Junior guard Veronica Burton scored four points from the free throw line, but NU went an abysmal 2-for-15 from the field.

“We couldn’t make a shot,” coach Joe McKeown said. “Fortunately, we got to the foul line a little bit.”

The Illini capitalized on the Cats’ struggles, and raced out to an 18-4 lead, before NU finally added two buckets of their own in the final minutes.

Down 10 after that first quarter, the Cats looked like a different team in the second. NU outscored Illinois 22-3, shooting 55.6 percent from the field.

The Cats, who hadn’t made a single shot from behind the arc in the first, also went 2-for-5 from three, with both makes by junior guard Lauryn Satterwhite. Satterwhite scored a career high nine points on Wednesday, with all of them coming from three pointers.

As NU’s offense improved, so did their defense. The Illini turned the ball over nine times in the second quarter, and the Cats took advantage, scoring 16 points off of those takeaways. Working off turnovers was part of McKeown’s message to the team between quarters, he said.

“We talked about getting better shots,” McKeown said. “(The message) was to just be patient. We’re doing a great job on defense. The ball’s going to go through. We’re going to start running out off turnovers, and that’s what we did. They did a great job in the second quarter just switching gears.”

In some of its past games, like against Nebraska on Feb. 17, NU has been successful early, but faded in the latter half of the game and relinquished its lead. This time, the first quarter was the Cats’ worst. But they woke up when the going got tough.

Illinois did come back and pull the deficit under 10 in the fourth quarter and NU didn’t score a field goal in the final four minutes of the game. But with clutch free throw shooting by senior guard Lindsey Pulliam and Burton, NU coasted to a 67-61 victory off the strength of its dominant second quarter.

Despite the weak and lopsided opening, the Cats roared back to respond and create a gap the Illini couldn’t close, even though they outscored NU 39-36 in the second half.

“We got off to a really slow start tonight,” McKeown said. “Illinois made a bunch of shots, but I love the way we played the second quarter. We held them to three points and got our offense together, started to get better shots, and were able to turn them over.”

— Women’s Basketball: Northwestern’s high pressure defense made a strong comeback in the win over Wisconsin