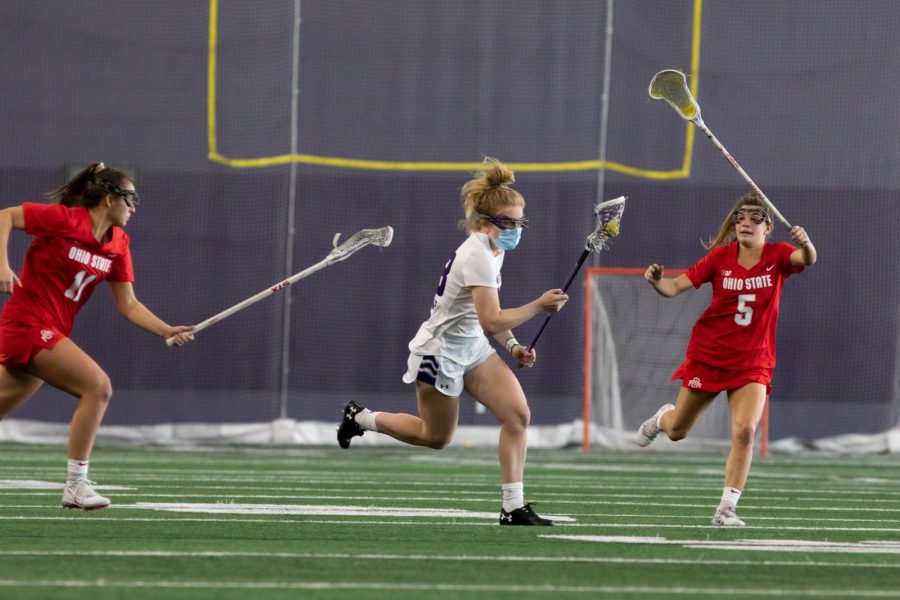 Lindsey McKone runs down field during Northwestern lacrosse’s season opener on Feb. 14. McKone is spending her graduate year playing for the Wildcats.

Graduate student attacker Lindsey McKone spoke to The Daily about her experiences playing lacrosse, including her decision to spend a grad year at Northwestern and her favorite moments on the field. This story is the second installment of the Why I Play series, where Wildcat athletes talk about why they love their sports and how they got started.

The Daily: When did you first develop a passion for lacrosse?

Lindsey McKone: I think it was the summer after eighth grade. I started playing in seventh grade, so I was a little bit late for the sport, but after eighth grade I played on my first travel team and had so much fun.

The Daily: What led to your decision to attend Northwestern?

McKone: Northwestern is the best combination of athletics and academics. Academics was really important for me, so I narrowed my search from that. Being from Texas and being late to the game, I was honored and surprised that the national champions of however-many-years were looking at me. The team culture, I knew I would fit into and love, and I knew it would be the right place for me.

The Daily: You decided to stay for a grad year. What was that decision like?

McKone: It was an easy one for me. I knew we had unfinished business. Last year, we were trending pretty well. We were also coming off a loss to the number one team in the nation (No. 1 UNC on March 9, 2020), so (I) definitely had a bit of fire and passion still inside me. I was lucky to have the opportunity to come back to take my fifth year, because I know it was a lot on Northwestern athletics to allow that. I felt like my time playing lacrosse wasn’t done.

The Daily: What has been your biggest struggle with the sport?

McKone: I had a really big learning curve going into college. I definitely struggled with keeping up and performing the way I knew I could. I just didn’t know how to get there. I mentally would beat myself up about it and every time I was trying to push myself to work harder, be better, it wasn’t manifesting.

The Daily:  How do you think coming from Texas where lacrosse isn’t necessarily as popular, has impacted you as a player?

McKone: All the girls coming out of Texas are really athletic and work really hard, and we have a chip on our shoulders. We want to prove ourselves in a sport that is dominated by Baltimore and Long Island and more traditional areas. I wanted to put Texas on the map for lacrosse and have Texas be and mean something in the sport. We have to work that much harder to be seen and that much harder to get credit for anything we do. As a Texan, I know it’s a matter of working hard, getting those groundballs, getting the not-so-flashy plays.

The Daily: Who is your biggest inspiration as an athlete?

McKone: My favorite athlete is Kelley O’Hara on the U.S. Soccer Women’s National Team. I have always looked up to the way she plays and holds herself. She’s the hardest worker, she has had a long tenure on the U.S. Women’s National Team and the way she carries herself has definitely contributed to who I am as an athlete and who I want to be. Also my high school lacrosse coach, Coach K, embodied what it was like to be passionate about a sport and to use athletics to push yourself and be a better person.

The Daily: What has been your favorite experience with lacrosse?

McKone: Winning the Big Ten Championship my junior year. We went through a lot that year as a team and so had I personally, and so to culminate in a championship was incredible. We beat Maryland for the first time in my career. This awesome energy we brought on the field that day completely blew them out of the water. We just clicked and we knew that all the hard work and all the adversity that we’d gone through as a team led us to that moment.