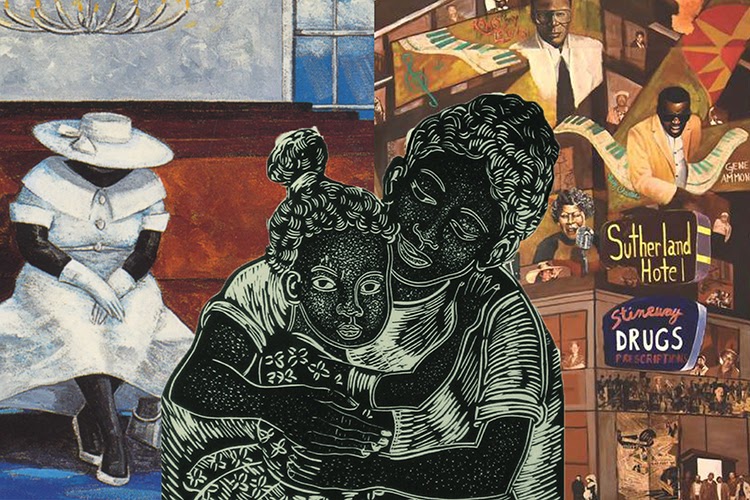 From left to right, the covers of NU alumna Angela Jackson’s works: “It Seems Like a Mighty Long Time: Poems,” “Comfort Stew: A Play” and “Roads, Where There Are No Roads: A Novel.” Jackson is currently serving as Illinois poet laureate. (Cover credit (left to right): Jonathan Green, Margaret Burroughs and Arlene Turner-Crawford. Graphic by Emma Ruck)

From left to right, the covers of NU alumna Angela Jackson’s works: “It Seems Like a Mighty Long Time: Poems,” “Comfort Stew: A Play” and “Roads, Where There Are No Roads: A Novel.” Jackson is currently serving as Illinois poet laureate.

Poet, author and playwright Angela Jackson (Weinberg ’77) became the fifth Illinois poet laureate this past November. Born in Greenville, Mississippi, Jackson moved with her family to Chicago at the age of one, and has spent most of her life in the area. The Daily spoke with Jackson about her aspirations as poet laureate, her writing career and her years at Northwestern.

The Daily: You’ve said that poetry is powerful, able to restore hearts and lift spirits. What issues do you hope to address as Illinois poet laureate?

Jackson: COVID-19 is the common issue that unites us all throughout the state. I understand that the opioid problem is a real problem downstate. So that’s another issue. I hope to send ambassadors of poetry to rehab centers, as well as schools and community centers and prisons and senior citizen centers.

The Daily: Gwendolyn Brooks served as Illinois poet laureate from 1968 to her death in 2000. You’ve called her your role model as a poet. Why does she inspire you?

Jackson: She was the first Black person to win a Pulitzer Prize of any kind, and she was the first Black woman to be the poet laureate of Illinois. Gwendolyn Brooks as an artist has influenced me because she was so devoted to looking at African American people, Black people, in an authentic way and portraying us in the fullness of our humanity. People tend to see Black people in stereotypes, but she, throughout the body of her works, saw us as fully human. At the same time, as an artist, her art history was so rich, because she treated language in a new way. She was highly inventive with words.

The Daily: Your 1993 book, “Dark Legs and Silk Kisses: The Beatitudes of the Spinners,” won the Carl Sandburg Award for Poetry. What was the message behind this work?

Jackson: “Dark Legs and Silk Kisses” is an almost ten year long investigation of spiders, as a symbol of Black women, and then all women, because spiders are underappreciated for all that they do. So spider bites can be very serious, but some spiders are good. You know, they get rid of the other insects, the pests in a garden, for example. The beauty and the intricacies of their webs are not appreciated; what ordinary Black women do is not appreciated.

The Daily: How did your experience at NU impact your writing career?

Jackson: If I had not gone to Northwestern, I would not be the poet or writer I am today, and my calling would not have come into its full fruition. At Northwestern, I met my mentor Hoyt W. Fuller, who was the editor of Negro Digest, later renamed Black World. The magazine pulled together voices of Black people from all over the world, and it was full of ideas. I had my first national poem published in Black World in 1971, when I was still a student at Northwestern. I’ve met people who were so important to me in my writing life at Northwestern. I am very lucky to have had the education at Northwestern that I had, and I had rich friendships that have lasted until I am the age I am now.

— “Not Your Yellow Fantasy”