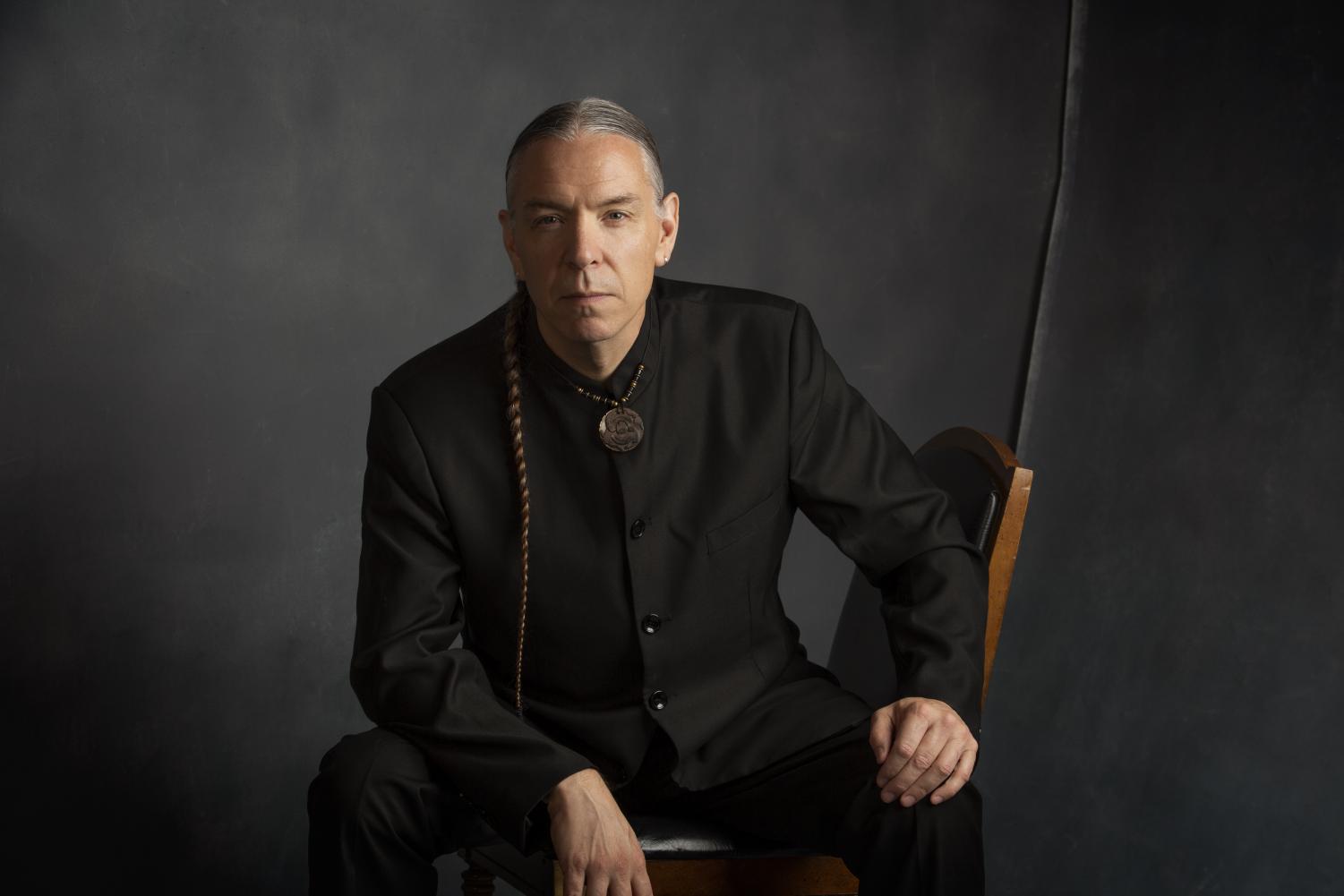 Jerod Impichchaachaaha’ Tate (Bienen ’90) is an Emmy Award-winning composer who incorporates American Indian languages, music and stories in his pieces.

Every time Jerod Impichchaachaaha’ Tate (Bienen ’90) composes a piece about Chickasaw culture, he pictures himself standing in the forests of Mississippi where his ancestors lived before removal.

Trips to the area in the ‘90s inspired him to write “Tracing Mississippi,” a concerto that incorporates traditional tribal songs and dance rhythms and was later recorded by the San Francisco Symphony and San Francisco Symphony Chorus. Both his grandmother and his parents were able to hear the piece performed, which he called a dream come true.

“(It felt like I was saying), ‘Here, family — this is how I feel about being us,’” Tate said. “I’m very grateful that I have had the opportunity to do that, to say, this is how I feel, as a Chickasaw man, symphonically.”

Today, Tate’s works have been commissioned by major North American orchestras, ensembles and organizations. He’s an Emmy Award-winning composer, with pieces featured in documentaries and TV shows such as HBO’s “Westworld.”

Inspired by the way that Hungarian composer Béla Bartók recorded, transcribed and preserved the folk music of his people, Tate incorporates American Indian languages, music and stories into his work. His pieces range from a fiery violin solo based on the melody of a Chickasaw Raccoon Song to a cantata about Standing Bear, a Ponca tribal leader and activist.

“I could do this for 50 lifetimes and never be done,” Tate said. “There’s so much wonderful and beautiful history and legends that we have got. I love it, I just feel like I’m in this bath of awesomeness.”

Jacqueline Wilson (Yakama), an assistant professor of bassoon at Washington State University, said Tate’s music was the first work she ever played by a Native composer. She describes his approach to music as akin to a new nationalism.

Native people are often referred to in the context of tragedy or a forgotten past, Wilson said. But when she performs a work by Tate or another Native composer, she views it as a positive reframing.

“There are lots of groups that have had to endure,” Wilson said. “But that does not mean that there is not a beautiful culture here still worth celebrating. And Jerod’s pieces bring to the table a joy and a pride and a contemporary context of this self-representation.”

Growing up in Oklahoma, Tate said he was “saturated” with tribal art. His father, a Chickasaw tribal judge who helped write the Chickasaw Nation’s current constitution, was also an opera singer and classically trained musician, while his Manx Irish mother was a choreographer and dancer.

From a young age, Tate wanted to become a concert pianist. He received a full-ride scholarship to Northwestern, where he studied as a piano performance major under mentor Donald Isaak. During his senior year at NU, his mother commissioned his first work, a ballet based on American Indian stories from the Northern Plains and Rocky Mountains.

Tate initially refused, but said he eventually realized she was giving him a way to be “entirely myself,” marrying his Native identity and classical training. After starting school at the Cleveland Institute of Music as a piano major, he took time off to tour with the ballet, which he said garnered an extremely positive response from Native colleagues, his tribe and the classical community.

“They saw the possibilities, and I was given an enormous amount of encouragement,” Tate said. “So I went back to the Cleveland Institute of Music and I said, ‘I’d like to add composition to my degree.’ And then I told my family that I was intentionally identifying as a Chickasaw classical composer.”

Tate also decided to change his feathered ‘80s hairstyle, à la Michael J. Fox, so that Native youth could see someone standing in front of orchestras with a braid. He went on to teach high schoolers in the Hopi, Navajo and Lummi reservations.

Tate works well with students of all ages, said Matthew Mailman (Bienen ’90, ’91), a professor of conducting at Oklahoma City University who has conducted Tate’s work several times. The two met freshman year while living in 1835 Hinman, and played in a wedding band together during college. Today, they’re still close friends who ask each other for professional advice.

“When he goes and does a gig, he gets everybody to fall in love with him because he’s so positive and his message is so important,” Mailman said. “Jerod networks extensively, and carefully and lovingly. He stays in touch with people, and it’s all genuine.”

For Tate, composing is about expressing yourself and connecting with others.

He said that connection transcends time — if he sat down with Mozart, he said they’d be able to have conversation about some of the same issues, from gigs going south to a violinist questioning whether something they’d written was possible to perform.

“It’s the same thinking, and the same innovation, and the same risk-taking and criticism or support of the day,” Tate said. “I’m amongst millions of composers. We’re all finding, exploring, expressing our identity and moving the human race forward in expression.”

To Tate, his own place in that growing tapestry of creativity is clear.

“I would like to be remembered as somebody who was very, very passionately happy being an American Indian composer,” he said.