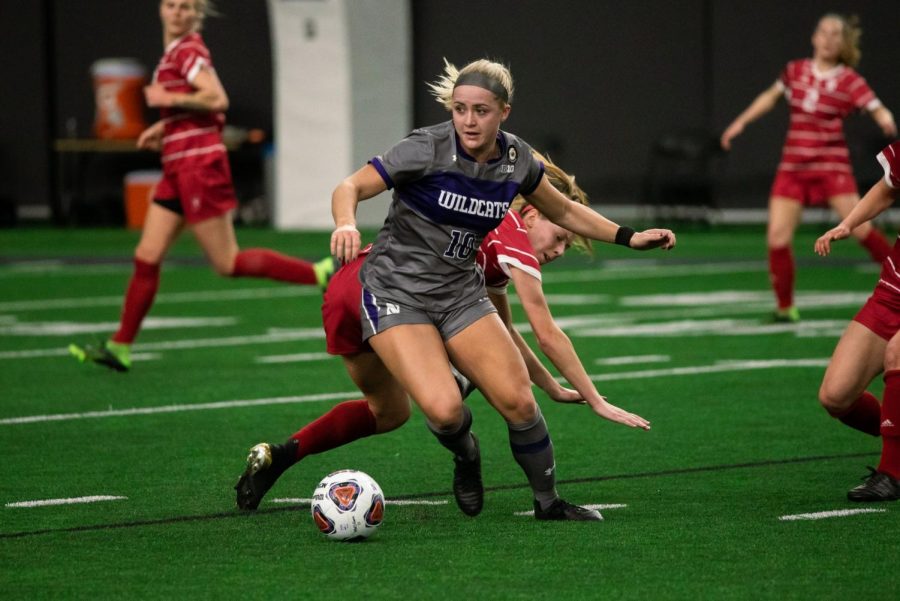 Junior forward Olivia Stone dribbles past an Indiana opponent. She and the Wildcats won their season opener Sunday, nearly a year after their season was cut short due to the COVID-19 pandemic.

After a fall without competition, Northwestern’s women’s soccer is back, with nearly its entire 2019-2020 roster returning to play this season.

The Wildcats (1-0) defeated Indiana (0-1) in Saturday’s season opener at Ryan Fieldhouse. The game went back and forth as the Cats and the Hoosiers struggled to break through each other’s defense, featuring plenty of corner kicks and yellow cards. The lone goal, scored by sophomore midfielder Aurea Martin, came at the 85:07 mark, handing NU a victory just before the final whistle.

The Cats return 25 out of 27 players from their 2019 campaign, when they went 5-10-3 and 3-6-2 in Big Ten play. Last year’s team was young, with only two graduate students and no seniors on the roster. Now, the Cats are bringing more experience and over a year’s worth of training to the pitch in hopes of a breakthrough campaign.

The lack of fans and families at games due to COVID-19 restrictions will certainly be a change from seasons past. Senior midfielder Kylie Fisher said the team tried to combat this and recreate a typical game atmosphere by creating energy on the sidelines.

“Our team really took on the idea of being our own cheerleaders,” Fisher said.

Martin said it was “amazing” to be back on the pitch, even if the environment felt different than usual and the team’s game was still rounding into shape.

“Everyone put their heart and soul and so much passion into the game,” Martin said.

Coach Michael Moynihan said the game felt “surreal” given the long break from competition. He said pulling out the victory toward the end of the game was “a very good feeling.”

Moynihan said he was excited to see the team’s growth and experience on the pitch, especially in comparison to last season. He said this year’s team still lacks experience in some areas, as some returners are young or have not played much due to injury, but he thinks the Cats’ senior leadership will “pay dividends.”

Martin credited the team’s physicality and aggression for helping them to victory.

“Everyone was super physical trying to get after it, get whatever touch on the ball we could,” Martin said. “I think people’s passion and spirit on gameday was more than we could ever hope for.”

The Cats are set to return to play against Penn State on Thursday at Ryan Fieldhouse. Fisher said they’re preparing by working on playing “more of a composed game” and settling into formation.

Moynihan said the team’s preparation for Penn State will be a little different from that of the Indiana game, since they didn’t have any footage of the Hoosiers and didn’t know how IU’s newcomers would affect the game. He said they plan on watching video of Penn State and focusing on defensive strategy.

“We want to be a high energy team,” Moynihan said. “There’s some places we can assert ourselves a little bit more.”