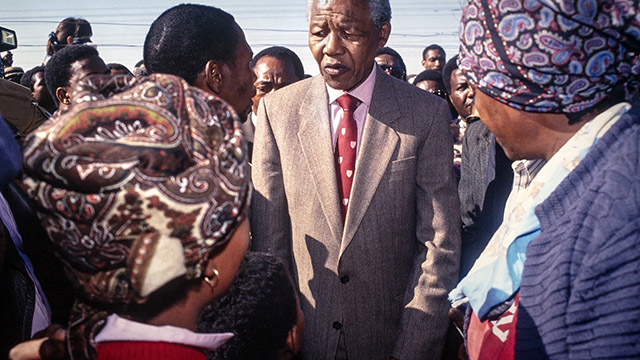 The new documentary by Medill Prof. Ava Thompson Greenwell explores the monumental role Chicago activists played in the movement by putting pressure on the governments of South Africa, Illinois and Chicago to halt their support of South Africa’s oppressive systems.

In July of 1993, Nelson Mandela visited Chicago three years after he was released from prison and one year before he was elected as South Africa’s first Black president.

“Mandela in Chicago,” the new documentary by Medill Prof. Ava Thompson Greenwell (Medill B.S. ’84, M.S. ’85, Weinberg Ph.D.’14), explores the monumental role Chicago activists played in the movement by putting pressure on the governments of South Africa, Illinois and Chicago to halt their support of South Africa’s oppressive systems. The film was broadcast on Feb. 18 and Feb. 21 on Chicago’s WTTW Channel 11.

“(Mandela) came to thank the people for all the work they had been doing, and I wanted Chicago to get some credit for that,” Greenwell said. “So much of history would have been lost had it not been for the film, so I’m hoping that the film itself will be a catalyst to really reignite interest in what happened in South Africa, but also what is still happening in South Africa.”

Though the South African apartheid ended in the early 1990s, the long-lasting effects of the institutionalized system of racial segregation has left Black South Africans — who account for the majority of the population — economically devastated as the country faces staggering unemployment rates and an economy in recession.

Greenwell’s documentary centers around Mandela’s 1993 visit to Chicago, highlighting the role the city and its activists played in the movement. It follows members of the Free South Africa Movement, who campaigned against South African apartheid through nationwide grassroots activities, awareness campaigns and protests across the U.S.

“There were millions of people involved in the anti-apartheid movement in the United States and in the world, and there were tens of thousands actively involved in Chicago,” said Cheryl Johnson-Odim (Weinberg Ph.D. ’78), former assistant director of African Studies at NU, who is featured in the documentary. “Of course the documentary can only highlight some of the people who had the most visible roles, but there were many others that contributed.”

The documentary is pieced together by archival footage and recent interviews with South African and Chicago anti-apartheid activists, all of which is instrumental in conserving that history.

Featured in the documentary is historian Lisa Brock (Weinberg M.A. ’83, Ph.D. ’89), who founded the Chicago Anti-Apartheid Movement Collection at Columbia College Chicago in 2007. The collection documents the work of Chicago activists in anti-apartheid efforts.

Brock called the documentary “a slice of people’s history in Chicago” and an image of international solidarity.

“That’s one of the things I’ve been able to see in my lifetime,” Brock said. “The things you think won’t happen, will never happen, actually do happen. If you fight long and hard.”

Greenwell, who serves as the co-director of Medill’s South Africa Journalism Residency Program, said her multiple visits to South Africa when running the program largely shaped her vision for this historical film.

The Chicago native also recalls a “Free South Africa” sign at Trinity United Church of Christ, which she said has been “seared” in her mind since high school. She called it a “full-circle moment,” growing up looking at that sign and now working to tell the story behind it.

Ultimately, Greenwell said she wanted to memorialize the work of Chicago activists. Three people featured in the documentary have died, she said, and the film has allowed their work to live on.

The film also spotlights the role NU and many members of its community had in the movement.

“I want them to believe that the work that they do does matter, and that even if they don’t live to see it, it may matter for future generations,” Greenwell said. “We see that with the civil rights movement, we saw that with the anti-apartheid movement, and we will see that, and are seeing that, with the Black Lives Matter movement.”