Women’s Basketball: Northwestern’s high pressure defense made a strong comeback in the win over Wisconsin 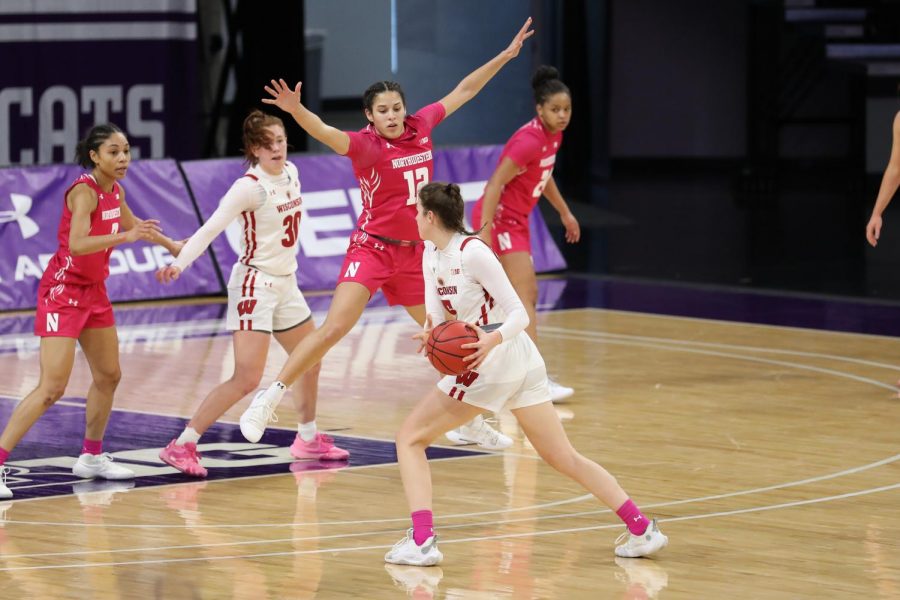 After losing to both Rutgers and Nebraska, Saturday’s 67-54 home win against the Badgers (5-15, 2-15 Big Ten) reiterated senior guard Lindsey Pulliam’s remarks that the Wildcats have “learned from (losses) and moved forward.”

The opening minutes were ugly and lacked energy, like previous games. The silence from the bench was noticeable compared to the boisterous Badgers’ sideline. NU’s offensive looks dwindled and the team struggled to stop Wisconsin’s fast ball movements.

“Without fans, one of our emphasizes has been to come in energized,” junior guard Veronica Burton said on the team’s lack of energy. “We definitely talked about bringing the energy and trying to implement that.”

But immediately after the first timeout, NU’s play on both ends of the court changed drastically, especially on defense. The Wildcats played aggressively, which prompted 26 turnovers from Wisconsin.

When NU was upset by Nebraska earlier this week, coach Joe McKeown said defensive positioning was a “challenge” the Cats needed to improve. NU knocked down that obstacle on Saturday with ease as their team racked up 30 rebounds and 11 steals. The Wildcats’ defense largely improved on their communication, which was lacking in the past two games.

“I thought we did a really good job forcing (Wisconsin) to play a little bit East, West, instead of letting them get downhill on us,” McKeown said. “We were more in sync than against Nebraska as far as our help and second chances.”

By half time, the Wildcats had built a comfortable 17-point lead out of pure defensive grit.

NU continued their high pressure defensive tactics at the start of the third quarter, allowing the team to transition into their up-tempo offensive control of the ball. As a whole, the team blocked out extremely well, limiting all shots the Badgers attempted.

With two minutes remaining in the third, the Wildcats transformed the game into a shooting clinic. Pulliam and junior guard Sydney Wood finished the game with 14 points each while Burton trailed behind with 13 points.

From there, NU used the last 10 minutes of play to rack up its lead on the Badgers.

“It was really exciting just to get back in the win column and really good for team morale,” Wood said.

The Wildcats will take on the Fighting Illini and Maryland next week as the season comes to a close.