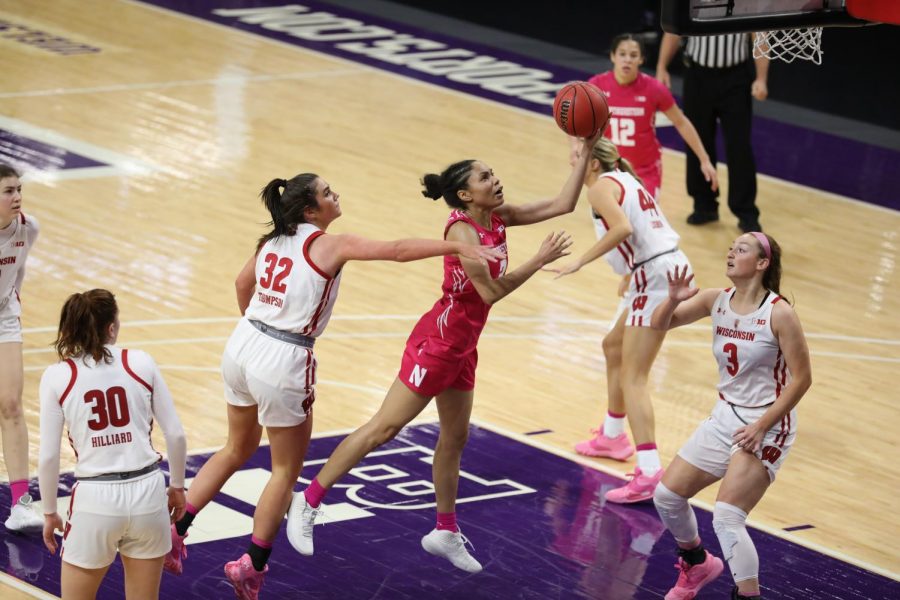 Sydney Wood lays up a shot. The junior guard scores 14 points in No. 24 Northwestern’s 67-54 win over Wisconsin.

When coach Joe McKeown gathered with his players nearly halfway through the first quarter, the score between No. 24 Northwestern and Wisconsin was tied at 10.

Key baskets from freshman forwards Anna Morris and Paige Mott brought the Wildcats even with the Badgers, who just minutes earlier used an 8-0 run to take the lead.

Seeing his team take “some really good shots” early on, McKeown knew his offense was prepared to go on a scoring tear. He also told his squad to increase pressure on defense.

Over the quarter’s final five-and-a-half minutes, NU outscored Wisconsin 13-1 behind key shots from junior guard Sydney Wood and senior guard Jordan Hamilton. Meanwhile, the Big Ten’s fourth-best scoring defense kicked into high gear, forcing six turnovers in four-and-a-half minutes and holding the Badgers scoreless for more than three-and-a-half to give the Cats a 21-11 lead at the end of the first quarter.

NU (12-5, 10-5 Big Ten) never looked back in the following 30 minutes, using a balanced scoring attack and dominant defensive effort that forced 26 turnovers and various scoring droughts to defeat Wisconsin (5-15, 2-15 Big Ten) 67-54 for its first win in its last three contests.

Senior guard Lindsey Pulliam and Wood scored 14 points each, with junior guard Veronica Burton adding 13, as the Cats shot 41.1 percent from the field, its highest rate in four games. Mott and Hamilton added eight and seven points respectively, to help NU achieve a season sweep of the Badgers for the third straight year.

After today’s stellar defensive performance, the purple-and-white currently hold the best turnover margin in all of NCAA women’s basketball (10.29) and have forced the eighth-most turnovers per game (21.76) in the country.

“It was really exciting just to get back in the win column,” Wood said. “I think it’ll be really good moving forward. We’re going to, once again, still learn from our mistakes in this game, but it was just good for our team morale.”

Wood got the scoring started 32 seconds into the game by a driving layup through the defense. The Cats’ defense forced Wisconsin to miss its first three shots and it looked like the start of a solid defensive performance against the Big Ten’s second-worst scoring offense.

But when Badgers forward Tara Stauffacher and guard Estella Moschkau nailed a set of triples, it was NU’s offense that shifted into high gear. Aggressive plays in the paint from Mott and Burton helped quash Wisconsin’s momentum and set the stage for the Cats’ strong play at the end of the first quarter.

NU’s success on both sides of the ball carried over into the second period, as a 6-0 run catalyzed by Wood and Hamilton put the Wildcats up by double digits less than halfway into the quarter. The Cats’ ability to find the basket transitioned to its defense, with the squad forcing four Wisconsin turnovers and holding the team scoreless for more than four minutes.

At the end of the quarter, NU allowed only nine points to the Badgers, while forcing seven turnovers, to take a 17-point lead into halftime.

Wisconsin started the third quarter with three quick baskets and continued its hot hand by shooting nearly 60 percent during the period. With guard Sydney Hilliard making all three of her shot attempts and scoring eight of her 15 points, the Badgers cut the Cats’ lead to as low as 12.

Wisconsin had a chance to close the gap as NU missed their first 10 shots of the half. However, a 10-for-10 team performance at the free-throw line and stellar play in the paint from Wood — who scored six points in ten minutes — guided NU to a 14-point lead after 30 minutes.

“We often go into the half with a lead and then we come out flat and that’s something that’s not going to work down the stretch,” Burton said. “Every halftime, we have to really define what we’re gonna do and put it into action early. We can’t really get complacent with our leads.”

With only three games remaining in the regular season, including two against top-15 opponents in No. 9 Maryland and No. 11 Michigan, the Cats have a chance to make a statement before entering the postseason.

To do so, McKeown needs his squad to be ready to perform at the top of their game.

“You just want to get to that point,” McKeown said. “You want to have some momentum. You cut down your practice time, more about execution. And focus on the little things. That’s really… where we want to go as a team in the next two-to-three weeks.”

— Women’s Basketball: Northwestern’s high pressure defense made a strong comeback in the win over Wisconsin