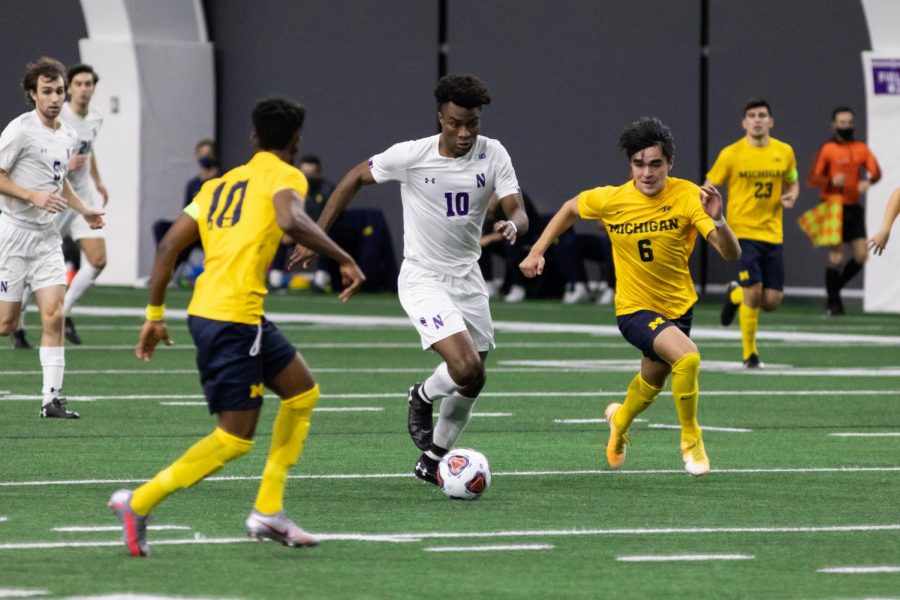 Ugo Achara Jr. sprints down the pitch. Northwestern fell to Michigan 4-1 in its season opener at Ryan Fieldhouse.

Northwestern has been waiting to build off a 2019 campaign that included a fourth place regular season finish in the Big Ten and the program’s first home playoff game since 2014.

The opportunity finally arrived on Friday against Michigan — 467 days after the Wildcats’ last game, a 1-0 loss to Maryland in the Big Ten Tournament Quarterfinals.

It didn’t take long for the Cats to set the tone. Five minutes into the match, freshman midfielder Joseph Arena fired a left-footed shot past Wolverines goalie Owen Finnerty for NU’s first goal.

With two great saves by senior goalie Miha Miskovic and a strong defensive effort in the first 45 minutes, the Cats were right where they wanted to be heading into the second half. But Michigan (1-0, 1-0 Big Ten) came out firing, scoring three goals in six minutes to secure a 4-1 victory over NU (0-1, 0-1 Big Ten) in Evanston.

The Wolverines found their way into the Cats’ third throughout the night, finishing with 13 shots, nine shots on goal and six corner kicks. Despite giving up numerous offensive opportunities, NU’s defense — down four starters to injury — showed signs of promise for the future, with players such as graduate defenseman Spencer Farina and sophomore defenseman/midfielder Deng Deng Kur making stops throughout the contest.

Offensively, Lenahan said his team needs to get the ball to “special playmakers” like junior midfielder Richie Bennett and freshman midfielder Rom Brown to create scoring opportunities. The Cats finished the game with only four shot attempts and two shots on goal.

Despite NU’s offensive struggles, the unit flourished in the game’s fifth minute. Seconds after receiving a throw-in, sophomore midfielder Vicente Castro sent a long, high-arching cross to junior midfielder Bardia Kimiavi. Racing down the sideline, Kimiavi flicked the ball up into the air before sending a back-heel pass to Arena, who sprinted into the crease before firing a rocket into the bottom left corner of the goal for the first points of his collegiate soccer career.

While Michigan responded with five shots and two corner kicks over the next 40 minutes, Miskovic effectively blocked the Wolverines’ attack. In addition to a diving save early in the contest, Miskovic made a phenomenal save when he deflected a header with one hand onto the goal post before falling on the ball.

But Michigan soon found paydirt as midfielder Marc Ybarra’s free kick evaded the reach of a diving Miskovic in the 49th minute. Less than five minutes later, forward/midfielder Moshtaba Al-Hasnawi curved a shot through two Cats defensemen and past Miskovic for the lead.

NU’s deficit then grew after Miskovic made a great block on a shot from midfielder Kevin Buca. With Miskovic still on the ground, Michigan midfielder Cameron Martin found the loose ball, forcing two Cats defenders to step between the posts and try to deflect the shot. However, Martin’s attempt found the net in the 55th minute.

With 63 minutes into the game, Lenahan replaced Miskovic with graduate goalie Ethan Bandre, who faced two shots and made one save. However, he gave up a penalty shot goal to Jackson Ragen. Sophomore goalie Kevin Klausz also saw playing time in the game’s final minutes.

Calling Miskovic and Bandre “terrific” goalies and Klausz “probably the best shot stopper on the team,” Lenahan said he is confident about the goalie position this season. The coach added that both Miskovic and Bandre will likely see playing time during the 2021 campaign.

After his team finished the final 45 minutes with more fouls than shots and corner kicks , Lenahan knows his team needs to be ready to keep up with talent all across the Big Ten. Ahead of Tuesday’s clash against Wisconsin, one of his tactics for success is simple.

“We got to get fit,” Lenahan said. “We gotta turn up the intensity on some of our trainings to try and achieve that.”