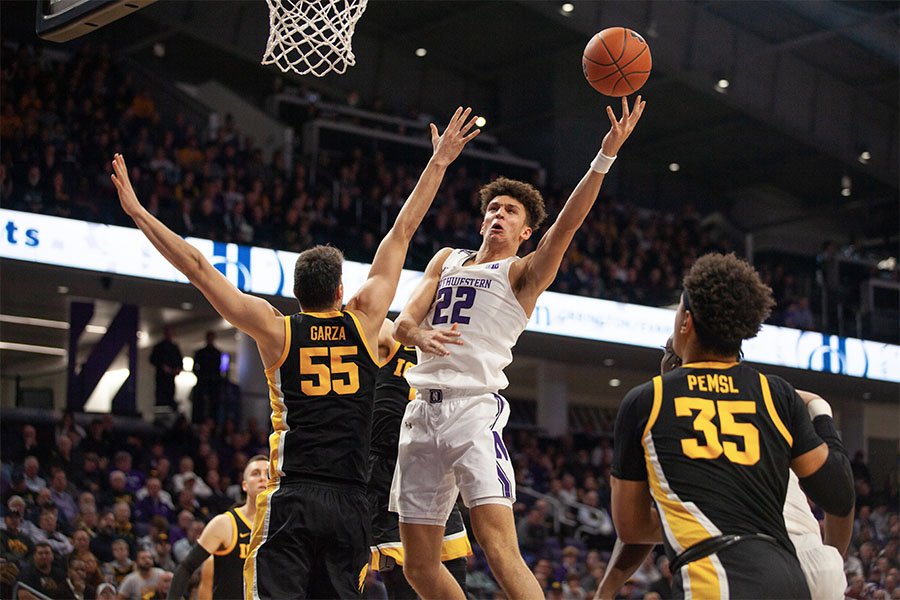 Pete Nance goes in for a layup. The junior forward had 12 points in the second half to key Northwestern’s ultimately unsuccessful comeback attempt.

Northwestern, riding an 11-game losing streak and playing the No. 5 team in the nation on the road, trailed Illinois 25-7 with 10:34 left in the first half Tuesday evening in Champaign.

Given the circumstances, the Wildcats folding their tent would have been a reasonable outcome. But against all expectation, NU whittled the Fighting Illini’s lead to 60-59 before fading late in the second half.

“The rest of the game (after the first 10 minutes), that’s who we need to be,” coach Chris Collins said. “We got a little bit tougher, we were sticking our nose in there, we were reactive, and we were more engaged defensively.”

Illinois hit its first three shots of the contest, with two coming from 7-foot center Kofi Cockburn, whose size would prove a thorn in the Cats’ side all game. The lead was soon 14-3, and a timeout called by NU couldn’t stem the tide. Halfway through the first half, just three Cats had scored, and sophomore guard Chase Audige led the team with only three points.

“We weren’t ready to play the way we prepared to play on either end,” Collins said. “Our defense was poor… that first 10 minutes just was not us.”

NU took tentative steps toward launching its comeback late in the first half, as sophomore guard Boo Buie contributed two jumpers and Audige dunked with :35 left to close the scoring. However, the Cats really began to threaten early in the second half, when junior guard Anthony Gaines, junior forward Pete Nance and Audige all hit three-pointers in the span of 1:16 to bring NU within 42-35.

After a scoreless 1:54, Audige sank another three to cut the lead to four. The Fighting Illini gradually began to show signs of shaking the Cats, culminating with a Cockburn layup with 8:55 to play that put Illinois up 56-46, but NU once again had an answer. Scores by junior guard Ryan Greer, Nance and junior forward Miller Kopp chopped the Fighting Illini’s lead to one point with 4:44 on the clock.

“I always tell the guys when you throw yourself into doing dirty work, into screening, rebounding, loose balls and things like that, then your talent offensively will take over,” Collins said. “In the second half, we got to the basket. I just thought we played really well.”

The final four minutes were damaging for the Cats, as Illinois guard Ayo Dosunmu showed off the talent that has made him a candidate for All-America honors. Dosunmu scored eight of his 10 second-half points in crunch time, and though NU had played its best basketball in some time, its losing streak extended to a dozen.

“You can’t spot a team like Illinois 18 points and play from uphill the whole way,” Collins said. “We had our chances. Give (Illinois) credit, they made some plays down the stretch, and did enough to beat us.”