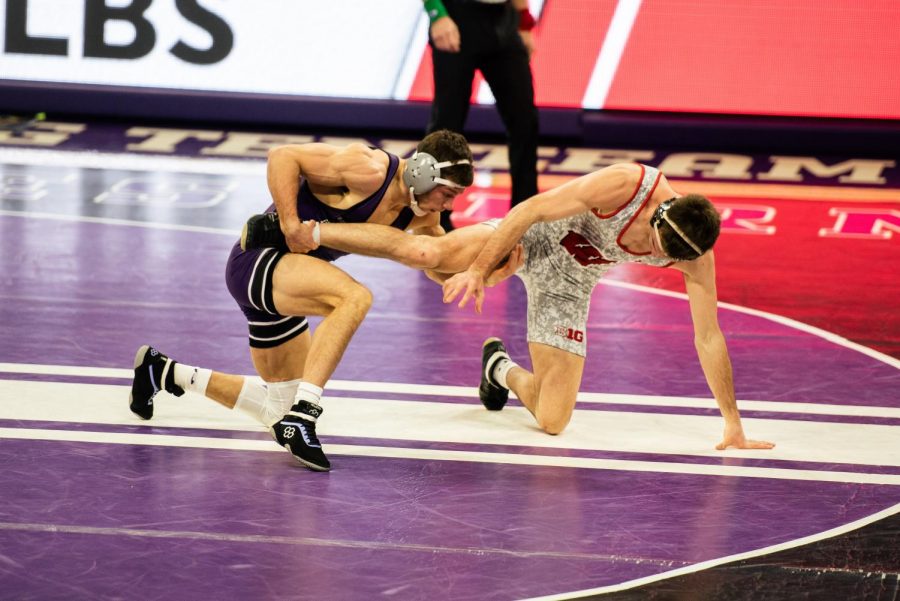 Ryan Deakin takes on Wisconsin’s Garrett Model in his return to collegiate action Sunday. Deakin, who missed the first chunk of the season due to injury, now looks set to defend his Big Ten Title in March.

It had been awhile since Ryan Deakin last wrestled on a collegiate mat. 343 days to be exact, since the senior took home first place at the 2020 Big Ten Championships, capping off a perfect regular season that earned him the number one ranking in the country.

Life is different now than it was in early March 2020. Deakin didn’t get to compete for a national championship last year because of the COVID-19 pandemic. And an injury kept him sidelined from the mat for most of this current season.

Until Sunday. Northwestern (2-5, 2-5 Big Ten) faced off against No. 19 Wisconsin (1-6, 1-6 Big Ten), in the last dual of the season hosted at Welsh-Ryan Arena. The Cats won in an 18-17 nailbiter, erasing a three week-long losing streak and quieting any doubters heading into postseason play.

For the first time in almost a year, Deakin strutted confidently up to the mat in his Northwestern singlet and readied himself to take on an opponent from another school. Facing off against Wisconsin’s Garrett Model, Deakin dominated to the tune of a 21-4 technical fall victory, sending a crucial five points the Wildcats’s way.

Deakin’s dominance was on full display against Model. He led 4-1 at the end of the first period, but accumulated almost 2 minutes of riding time in just the first frame of play. He’d add seven points in the second period and another 10 in the third. Takedown points came easy.

Needing a 15-point lead to seal the deal early via technical fall, Deakin came over top of Model, readjusted and drove through, ending the match with just under a minute remaining in the third period. His victory gave NU a commanding lead in the bout, one of four individual wins in a row from an imposing middle of the lineup.

“When you’re out there you try to score points, try to dominate the matches,” Deakin said. “It was nice to put some points on the board, it’s a big momentum builder.”

Junior Colin Valdiviez, junior Yahya Thomas and freshman David Ferrante also came away with victories.
With NU’s Friday matchup against Iowa postponed due to COVID-19 concerns in the Hawkeye program, the Cats will next face off against Minnesota Sunday before shifting their attention to the Big Ten Tournament set for early March.

Coach Matt Storniolo said the scheduling changes haven’t affected his team’s preparation for the weekend. They’ve already shifted the focus past Iowa. And this isn’t the only time the NU was expecting to match up against Hawkeye wrestlers. They’ll see each other in the postseason.

“The silver lining is we’re gonna see them two weekends later anyway, at Big Tens and NCAAs,” Storniolo said. “It would’ve been nice to get an additional match in, especially for a guy like Ryan Deakin who’s just coming back. But knowing that there’s a chance this could happen, that’s why we got him in an exhibition match last weekend.”

— Wrestling: Northwestern falls to No. 4 Penn State and Indiana in Tri-Dual

— Wrestling: Northwestern defeats Maryland, falls to No. 3 Nebraska in Tri-Dual