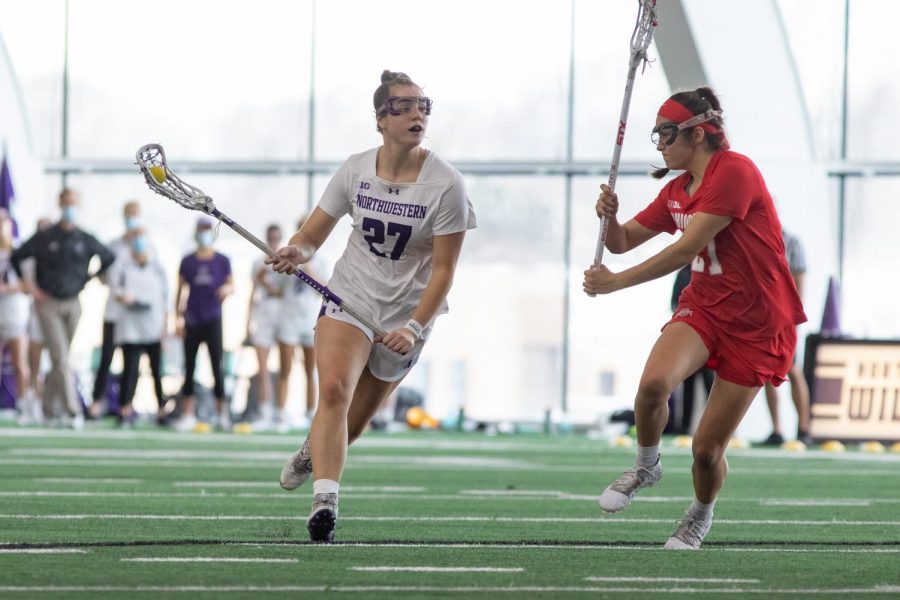 After 342 days without official NCAA competition, Northwestern lacrosse is back. And over the weekend, the team came away with a performance that set the tone for the kind of season they hope to have.

The Cats return came after an uneven end to their 2020 campaign, when they lost three out of their last five games. This year, the team will play a conference-only schedule and compete against all other Big Ten lacrosse programs twice.

One big change with Sunday’s return was the absence of fans and families. Scane, a Michigan native, said the season opener was the first time neither of her parents had attended one of her games, which was a “little tough” for her. Despite the lack of spectators, Scane said the team did a good job of “hyping each other up” and building excitement about the game.

“I think the team did a good job of bringing its own energy,” Scane said.

Gilbert said the long break from competing left team members with a lot of “pent-up passion.” She said she felt the team came prepared” both mentally and physically.

The Cats dominated the first half, scoring five goals just five minutes into the game and 15 by the end of the half. They won 13 of 15 draw controls in the first half.

Coach Kelly Amonte Hiller credited NU’s strength off the draw and offensive skill as the two preeminent reasons for the team’s victory.

“We were able to really take advantage of the offensive opportunities,” Amonte Hiller said. “We shot well, we were very poised on the offensive and we put a lot of pressure on them defensively.”

Gilbert said she felt the team’s “cool and collected” mindset also contributed to the win.

Scane outdid her last offensive performance for the Cats, when she scored eight goals against UNC on March 9, 2020. Her nine goals tied a Northwestern single-game record, a fact Scane wasn’t even aware of until teammates began congratulating her.

“The whole goal is to win games and play for each other, so I’m glad I put as many goals in as I did and helped our team get the victory,” Scane said.

After dominating the first frame of play, NU played a slower second half. The game ended with three unanswered Ohio State goals, and the Cats only won six out of 15 draws during the half.

Gilbert said draw controls are a point of focus for the team, which did generally well off the draw on Sunday. She said the team wants to build on their draw strategy ahead of their next two games against Johns Hopkins on Feb. 26 and 28.

Amonte Hiller said the team plans to continue practicing as they have over the past eight months in preparation for their trip to Baltimore.

“Having a solid team and a veteran team, we’re able to have some strong practices and compete with each other,” Amonte Hiller said.