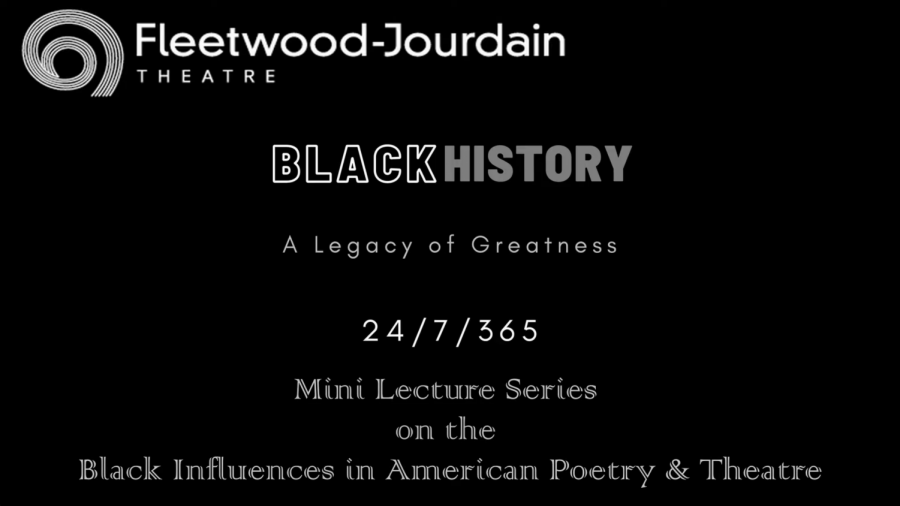 One of the Fleetwood-Jourdain Theatre’s lectures by Associate Artistic Director Bria Walker analyzing the life and work of playwright Ntozake Shange.

When playwright Ntozake Shange was a graduate student, she saw a double rainbow, a beacon of light in her depressive state. From this, her choreopoem was born, a play that is still widely produced today and explores Black identity.

Associate Artistic Director of the Fleetwood-Jourdain Theatre Bria Walker discussed Shange’s work and legacy in an event hosted by the theatre Tuesday night.

During the lecture, which was a part of the theatre’s 24/7/365: A Legacy of Greatness series this month, Walker discussed the significance of Shange and her work in the broader context of Black culture and legacy.

Shange, a Black female playwright, poet, fiction writer, dancer, educator and activist, is best known for her 1976 choreopoem, “For Colored Girls Who Have Considered Suicide/When The Rainbow Is Enuf,” one of the most produced plays around the world.

“She wanted to dissociate herself from a culture that championed slavery,” Walker said. “She began to find her voice as a poet.”

Walker said Shange’s poem, which the playwright coined as a “choreopoem,” was one that combined poetry and dance and “explored different facets of Black female identity.” The set of 20 poems together drew the attention of a director and producer, and it would later become a play, spending seven months off-Broadway and two years on Broadway.

The poems, Walker said, were inspired by Shange’s struggles during her time as an undergraduate and graduate student. After attempting to commit suicide multiple times, Shange began to pen poems that would later form “For Colored Girls.”

“One night, while driving home and feeling especially depressed, Shange saw a double rainbow over the city of Oakland, California,” Walker said. “It was in that moment she realized women have a right to survive.”

Shange also connected with her Black roots, Walker said. The playwright, born Paulette Williams, changed her name to Ntozake, which is Zulu for “she who comes with her own things,” and Shange, which means “one who walks like a lion.”

Walker said Shange, who endured endless attacks of racism as a Black woman, later became a voice for social justice movements and embodied the struggle of Black women. In the playwright’s own words, Shange believed Black women “have as much right, and as much purpose for being here, as air and mountains do.”

“And this is for Colored girls who have considered suicide, but are moving to the ends of their own rainbows,” Shange wrote in the choreopoem.

Walker said the choreopoem inspired many artists after Shange, and the play continues to be produced across the world. She said the Fleetwood-Jourdain Theatre’s 2013 production of “For Colored Girls” included a unique aspect: Artistic Director Tim Rhoze added a bass player to compose original music for each character.

“Ntozake Shange is iconic in the theatre world… “For Colored Girls” was a play that I always wanted to produce, to direct, to be a part of in some way,” Rhoze said. “In my mind, when I read it, I kept hearing in my head an upright bass, as it was able to capture the rhythm, the soul and the nuances.”

This upcoming summer, the theatre will also be producing another one of Shange’s works, “spell #7.”

Although Shange died in late 2018, Walker said her legacy lives on through her work and through those who she has inspired.

“Ms. Shange often said that she sought to build a legacy in which Black culture was memorialized and preserved,” Walker said. “I think it’s safe to say, Ms. Shange, you accomplished your goal — we here at Fleetwood-Jourdain Theatre are forever thankful for your words, for your ideas, for your spirit and for helping us find God in ourselves.”