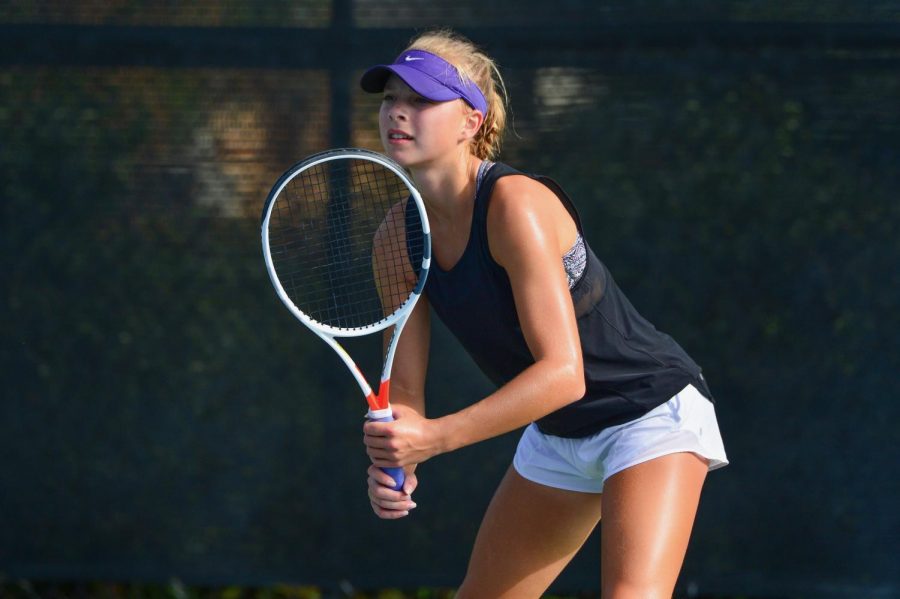 Sydney Pratt stands on the court. The five-star recruit is a key part of Northwestern's 2025 recruiting class.

Both Pratt and Rabjohns are Illinois natives who played in the United States Tennis Association and lower-level tournaments at Northwestern.

The two played in the same junior tournaments, practiced together, and were teammates on a Chicago team. For head coach Claire Pollard, the two players being local recruits came as an advantage.

“When you’re able to recruit locally, you know more people who know them, who you actually have developed a relationship with,” Pollard said. “You actually can get to know really what you’re getting.”

Rabjohns started playing tennis when she was five years old, while Pratt started when she was six. Both recruits played soccer when younger, but chose tennis as their main sport around their middle school years.

Pratt is currently ranked No.1 in the midwest region of USTA, and according to TennisRecruiting.net is the 38th-best college recruit in the nation. She boasts a 41-10 personal record, and has won 35 matches against four- and five-star recruits.

“Because my ranking was not as high as a lot of other girls, I was kind of playing catch-up throughout high school, and playing high school tennis would have taken time away from tournaments and practices that I needed to get better ,” Pratt said.

Rabjohns traveled up the radar of college coaches as a standout on her high school team, racking up back-to-back class 2A singles titles in 2018 and 2019. During the 2019 season, she led her team to the state championship. Her personal achievements include All-State honors and being named team MVP all four years.

For her senior season, Rabjohns got to compete in both conference and sectional tournaments, but did not have a state tournament due to COVID-19 concerns, where she could have competed for her third title.

Rabjohns said she was sad the team could not play in states this year, especially since they were really good this year. But she is happy to have gotten a senior season since she didn’t think it would happen.

Rabjohns kept her options open throughout the recruitment process, but fell in love with NU after talking to Pollard and visiting campus. For Pratt, Northwestern was always an obvious choice.

“It was my number one school that I wanted to go to throughout the recruiting process, and part of it was because I was so close,” Pratt said. “It always had been a dream.”

Pollard, who is in her 22nd season as head coach, looks for recruits who enjoy the challenge of a difficult game, that relish “the risk of winning and losing.”

Rabjohns just wants to join her teammates on the court and get a taste of what it’s like to be on the NU tennis team.

“I think we pride ourselves on a team of supporting people, being there for one another and, you know, accepting everyone,” Pollard said.

— Women’s Tennis: No. 13 Northwestern rebounds from loss to No. 3 Texas to down No. 10 Oklahoma State and No. 9 Ohio State at ITA Indoors

— The Sideline: Claire Pollard perfects winning ways, on and off the court