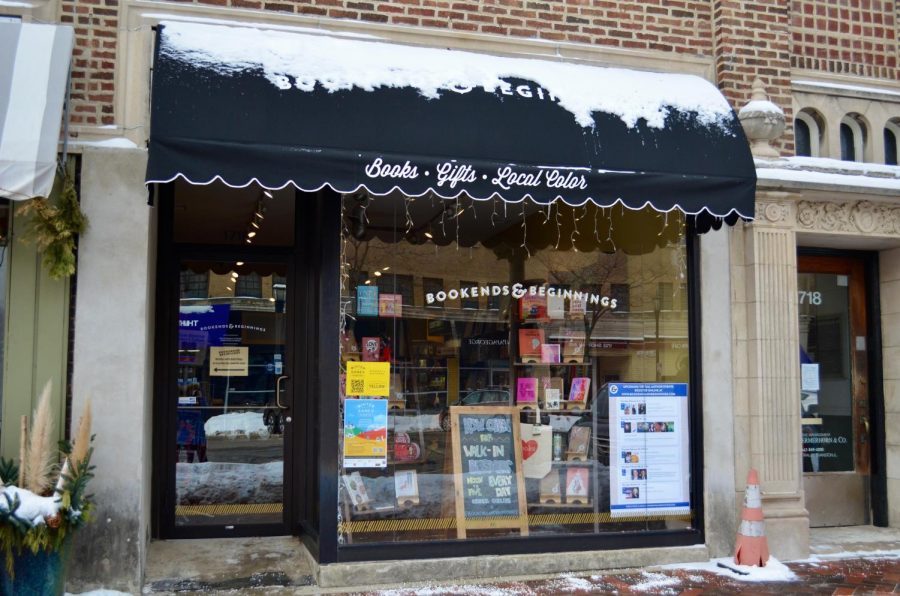 Bookends & Beginnings’ new storefront at 1716 Sherman Ave. This new addition to the beloved Evanston store recently opened to the public.

Despite the challenges the pandemic has brought on, Bookends & Beginnings – which recently expanded – continues to thrive.

When CouCou & Olive, which was adjacent to Bookends & Beginnings, closed, bookstore owner Nina Barrett (Medill ‘87) jumped at the chance to expand and grow the store. She said she saw the storefront’s large window on Sherman Avenue will increase business visibility.

“We never could take advantage of all the foot traffic that comes from the restaurants, the football games, the reunions or the parent-child drop-offs because the store is located in an alley and not directly visible on the street,” Barrett said.

Barrett wanted the extension to serve a boutique-style gift store appealing to the average passerby. Once individuals come inside, Barrett said she hopes to direct them to the alley store.

Both a Yale and Medill graduate, Barrett has worked in the book industry for the past 15 years. She said her time as a publisher and bookstore manager gave her the skills necessary to run her store.

While completing her Medill degree, Barrett worked as a general clerk at an antique bookstore and was even a manager at the store. All experiences which she attributes to her ability to run “Bookends.”

Once the owner of Bookman’s Alley, the store that used to occupy “Bookends,” announced he was going out of business, Barrett realized the time had come to open her store.

Tom Slonka, an Evanston resident and former bookstore owner, said he is delighted by the expansion as it is a definite sign that the store is booming financially.

“The expansion of the store itself shows good promise. Moreover, it will be great for actually promoting the store in terms of its visibility,” Slonka said. “Thousands of people pass (by), not knowing that it’s here.”

Slonka said there used to be about ten bookstores in the city, but once Barnes & Noble opened in 2006, the number of independent bookstores decreased. However, the store’s closure this past spring may lead to the arrival of more indie bookstores, Barrett and Slonka said.

“Bookstores are doing better now than they were before the pandemic because of an increase in the number of people that are reading, and because the message has spread, which emphasizes the importance of supporting your local bookstore,” Barrett said.

Barrett stressed the importance of independent bookstores as places that foster a sense of community and comfort, an experience big-box retailers can’t replicate.

“I always come in here when I’m downtown, and I order books through them,” Rosemont said. “It has a nice community-like feel to it, and they have great programs.”

Barrett also emphasized the relationships she has formed with customers. Barett started a GoFundMe for the business at the start of the pandemic. One of the donors said her son, a transfer student at Northwestern, found comfort and solace in the bookstore’s community.

“She had said, ‘You are what got him through the year, you and your store,’ and that always stuck with me,” Barrett said. “People are ready to return to an idea of independent businesses that have personality and that want to make real human connections with their customers.”

Correction: A previous version of this story misstated the name of the store that previously occupied Bookends & Beginnings’ new storefront, as well as the address of the new storefront. The Daily regrets the error.