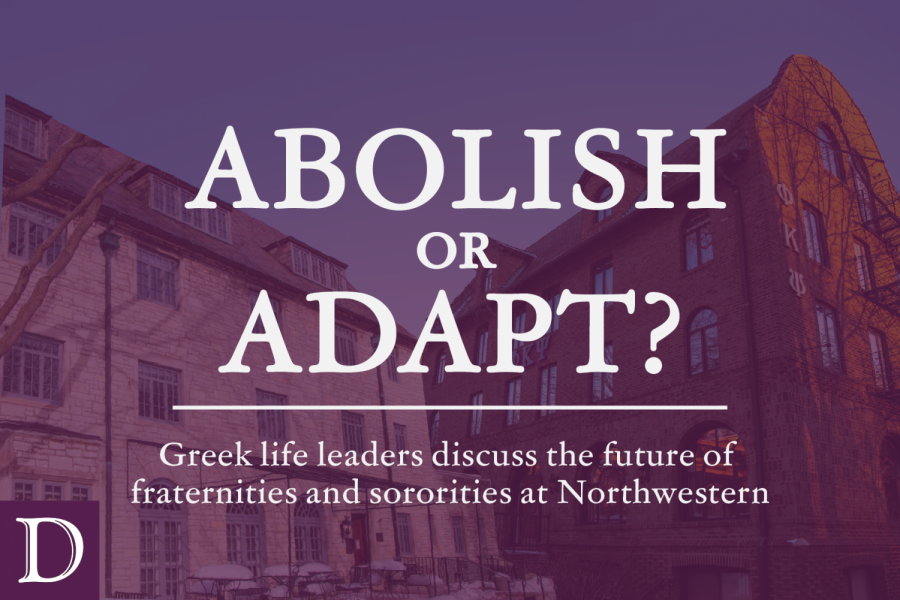 The Phi Kappa Psi and Delta Gamma buildings on campus.

The advent of the Abolish NU Greek Life movement last summer sparked ongoing discussions of abolishing or reforming Greek life at Northwestern. The Daily spoke to a member of the Abolish Greek Life movement about the group’s perspective on reform, accountability and the future of Greek life on campus. The student chose to remain anonymous due to threats of harassment.

The Daily:  How has the Abolish NU Greek Life movement been communicating and collaborating with the Interfraternity Council and/or Panhellenic Association?

Abolish NU Greek Life: It’s mostly been informative contact with PHA, to understand how groups disband, what recruitment might look like and things like that. We actually just had a meeting with the president of IFC, talking about changes that he was thinking of implementing, and getting our ideas out there. We have very different end goals, but they definitely overlap in some areas. We’re really excited to see if IFC will be able to make those changes and how we can help going forward.

The Daily: How do you work around the differences in your goals?

Abolish NU Greek Life: We acknowledge it’s not easy or immediate to abolish Greek life. So to the extent that we can, we want to make positive changes. But people are continuing to join, so it makes sense to still try to make changes for those people who are involved. We don’t believe it’s enough, but it’s in the right direction. Obviously, accountability is something that we want. Social change is something we want. Fixing broken systems is something we want. We want to help that happen. It doesn’t mean the end of the harm the system causes, but it means fewer people are harmed.

The Daily: Is the Abolish NU Greek Life movement trying to expand its work beyond the Instagram page and collaboration with IFC and PHA?

Abolish NU Greek Life: There have been attempts to move toward activism. It’s a little challenging, given the anonymous nature and structure of Abolish Greek Life right now. But it’s something we definitely hope for in the future. We’re just trying to figure out the best way to do that while still protecting those who are submitting anonymously. Our current strategy is to move toward encouraging current members not to participate or prospective members not to join. The main point of our page is showcase stories of students, and it’s been really transformative. It speaks for itself.

Abolish NU Greek Life: It’s possible that we might have a spokesperson or a few members of leadership do that in the future. For right now, there’s not really a way we can do that. Our priority has been to protect those sharing their stories. We wouldn’t want them to feel unsafe in any sort of way. We’ve also received a lot of harassment anonymously and it’d be a lot more challenging if our names were attached to the page. It would also be a lot more emotional labor for those currently running the account, but we definitely are open-minded.

The Daily: What kind of harassment has the movement received?

Abolish NU Greek Life: There’s not a lot of harassment from students, but a lot of harassment from alumni. They’re really insensitive, really diminishing of a lot of people’s pain and also really accusatory towards us. That’s another reason why we want to continue to stay anonymous. We want to be able to do this work and do it well and protect other people’s stories without the influence of people — especially alumni, who are more powerful, have the University on their side and can come after us in a different way.

The Daily: Earlier in the Abolish NU Greek Life movement, there were allegations that its anonymity hindered accountability. How do you ensure your movement is transparent and accountable, even while anonymous?

Abolish NU Greek Life: Being really transparent about our posts is something that we do try to continue. People questioned the validity and the integrity of the page, if there were possibly false stories.

We posted a response to that saying we aren’t fact checkers, we aren’t journalists. Our responsibility isn’t to deem which stories are worth sharing. We want to believe survivors — that’s really important to us, especially when Greek life as a whole tends not to. We do want to hold ourselves accountable, and we can best do that by almost removing ourselves and making it really just about the stories.

The Daily: As recruitment continues, what does the future of Abolish NU Greek Life look like?

Abolish NU Greek Life: We’ve already seen the really big impact this page has had. But people will continue to experience the pain and harm from Greek life’s system. There are just so many issues within Greek life that you can’t fix them all, especially in this process of getting national approval for every little thing. Even if organizations could make those changes, it would just take far too long. If our page can stay up and continue its work, and people continue to share their stories, it’s not something that you can constantly ignore.

For the future, our hope is that eventually we can prove Greek life obsolete. We hope that slowly, people start to realize that the pain for some isn’t worth the benefits for an even more exclusive group. And hopefully, it kind of dies down itself. We saw such mass deactivations this summer, largely in response to the movement that our pages started. So people are definitely listening and hopefully continue to do so.