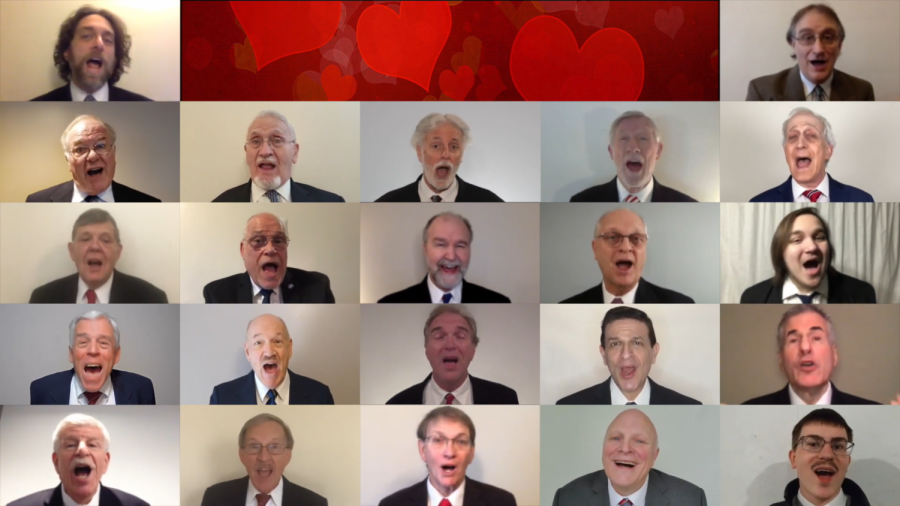 The New Tradition Chorus sings one of their Virtual Singing Valentines.

Northbrook-based New Tradition Chorus kept Valentine’s Day traditions alive this year through Virtual Singing Valentines. The group pre-recorded songs that people could buy and send to their significant others.

The New Tradition Chorus is a predominantly male chorus that has been around since the 1980s. Chorus Manager Dave Dreyer said the group has been doing in-person singing valentines for years.

“In the past, we’ve had quartets go out and sing to teachers, retirement homes, secretaries and more,” Dreyer said. “We knew we weren’t going to be able to go out in person this year, so we thought what if we were to put together a couple of Valentine’s songs?”

Video producer and chorus member Barry Cain said members recorded themselves singing, and the clips were then pieced together into a cohesive love song.

Cain said although the technical process was “quite complicated,” the video editing and audio synchronization led to a successful end-product video that could be purchased and sent electronically to anyone, no matter where they live.

“This virtual thing seems to be very popular,” Cain said. “I had one customer buy five (Singing Valentines) who said this is great because he’s got kids all over the country.”

The group, which has members ranging in age from 19 to early 80s, prepared three love songs for Valentine’s Day, of which a combination of two could be bought for a loved one. The songs included “Can’t Take My Eyes Off You,” “How Sweet It Is To Be Loved by You” and “You Are So Beautiful.” The choir sings in the barbershop harmony style, an a cappella style from the 1930s characterized by its four-part harmony.

Russell Hook, the president of the chorus, said the virtual valentines were inspired by the success of a virtual holiday show the chorus put on in December.

A member of the group since 1972, Hook said the chorus holds a special place in his heart, as he has made lifelong friends there.

“The kind of singing fraternity we have develops friendships through music,” Hook said. “Virtual Valentines was fun to do, even though there was a learning curve on how to produce it.”

The group has held virtual rehearsals during the pandemic, Hook said, through which they have been able to keep the choir together.

Dreyer said the Singing Valentines were a great way to spread love safely in the pandemic while still performing with others. While singing by himself was not the same as performing with his friends, he said he still loved the experience.

“It’s a lot of fun, keeps the tradition going, and keeps our guys singing,” Dreyer said. “We’re all eagerly anticipating the time we can get back together again, and this is the next best thing we can do — share our music with family, friends, or, who knows, even total strangers.”