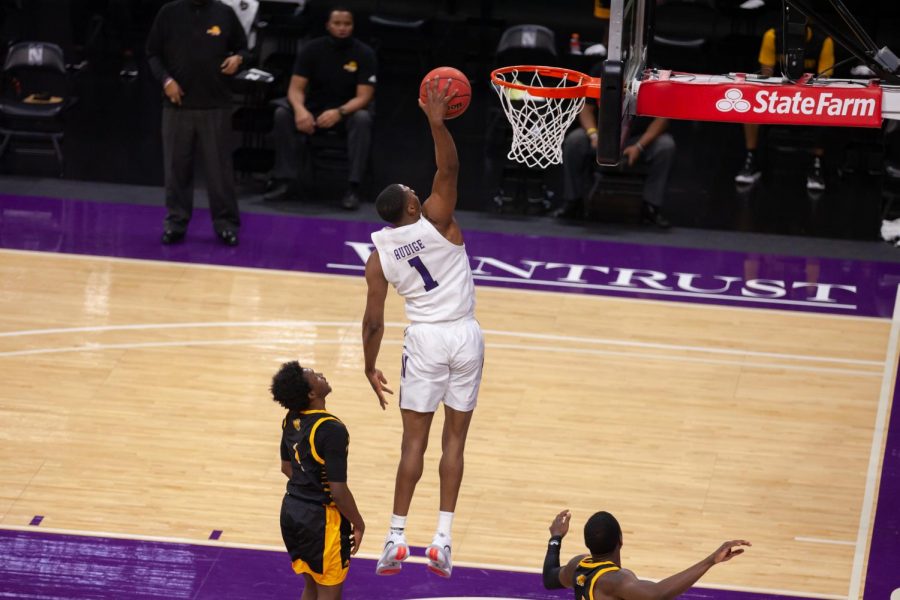 Chase Audige dunks. The redshirt sophomore guard had 11 points in Northwestern’s 64-50 loss to No. 25 Rutgers.

Northwestern’s second game in the season against No. 25 Rutgers ended with a loss, the team’s 11th consecutive .

“We believe we’re a good team,” coach Chris Collins said after the game. “We’re just coming up a little bit short. We gotta play with a little bit of that sense of anger, and confidence that when the time comes, we can make those plays (to win).”

Junior forward Pete Nance’s jumper gave NU a 14-4 advantage in the first, but the Knights steadily worked their way back into the contest, leading 20-19 after center Myles Johnson dunked. The teams crossed the four-minute mark tied at 27, but a three-pointer, two dunks, a layup and a free throw handed Rutgers a lead it wouldn’t give up.

Both teams shot 26 percent in a quiet second half, and a Knights’ scoring drought of nearly eight minutes gave the Cats a chance to get back into the game. A Nance free throw whittled Rutgers’ lead to 43-40 midway through the second, but sophomore guard Boo Buie fouled Knights guard Paul Mulcahy, who sank both free throws to stretch the lead back to two possessions.

Shortly after, Rutgers guard Geo Baker fouled junior forward Miller Kopp, sending him to the line for a one-and-one opportunity. Kopp missed, the first of three one-and-ones NU would miss in the second half. It was during this stretch that Knights guard Caleb McConnell nailed a pair of threes to put Rutgers up 51-42.

“The free throws were big,” Collins said. “We had an opportunity to try and get eight points at the free throw line, and we got one… when you’re playing a good team on the road, you can’t have those lost opportunities.”

The Knights made all 10 of their free throws in the second half, helping to prop up a seven-field goal performance in the final 20 minutes. Meanwhile, redshirt junior guard Anthony Gaines, who dropped 11 points in the first half for his highest single-game total since December 2019, was held scoreless in the second, taking just one shot in nine minutes of action.

— Men’s Basketball: After a rocky start, Pete Nance is living up to the hype. Now he’s a Big Ten problem.